Venice Dispatch – Bones and All

The downside to seeing a truckload of festivals films year in, year out is that a sense of déjà vu inevitably sets in. Whether in terms of subject matter, message or style, your mind registers a lot of been there, done that if you’ve been around long enough. Which makes it all the more exciting when a filmmaker really pushes the envelope and hits you with something truly different. And guys, Luca Guadagnino’s BONES AND ALL is that rare beast. It’s a cannibal romance that’s grotesque, beautiful, horrific, tender. It is fearlessly unique and will likely offend many people’s sensibilities. But what a story it tells. Crazy respect for all involved and God bless the Venice Film Festival for including this absolute shocker in its competition lineup. I’m floored.

The film introduces us to Maren (Taylor Russell), a teenager who seems a bit shy but otherwise not that different from any other at her new school. She accepts a classmate’s invitation and sneaks out at night to join their sleepover. It’s there that something completely unexpected happens and we realize not only is Maren a very different girl, but her father is aware of this; for the minute he sees her back home, he sends her packing and the both of them leave town right away. Soon after this ominous opening, we learn more about Maren when she wakes up to a taped goodbye message from her dad. Deserted and burning with questions, Maren sets out to find the mother she never knew. On this journey across Middle America, she’ll meet and bond with Lee (Timothée Chalamet), a boy with many of the same questions and problems. Can the two manage to navigate a world with no place for them, together?

Storytelling is about empathy, about imagining and understanding the fates of others. So how come we’re hardly ever asked to consider what it’s like to be born with the urge to consume human flesh? When would you realize that about yourself and how do you or those around you deal with that? What are the predicaments you face in life and are there solutions? While cannibalism may have been used as gags or plot devices in genre cinema, until today I’ve never actually seen anything that asks me to empathize with a cannibal (yes, I passed on the succinctly titled doc CANIBA). Is it perverse to even consider these things? Does empathy have a moral boundary? 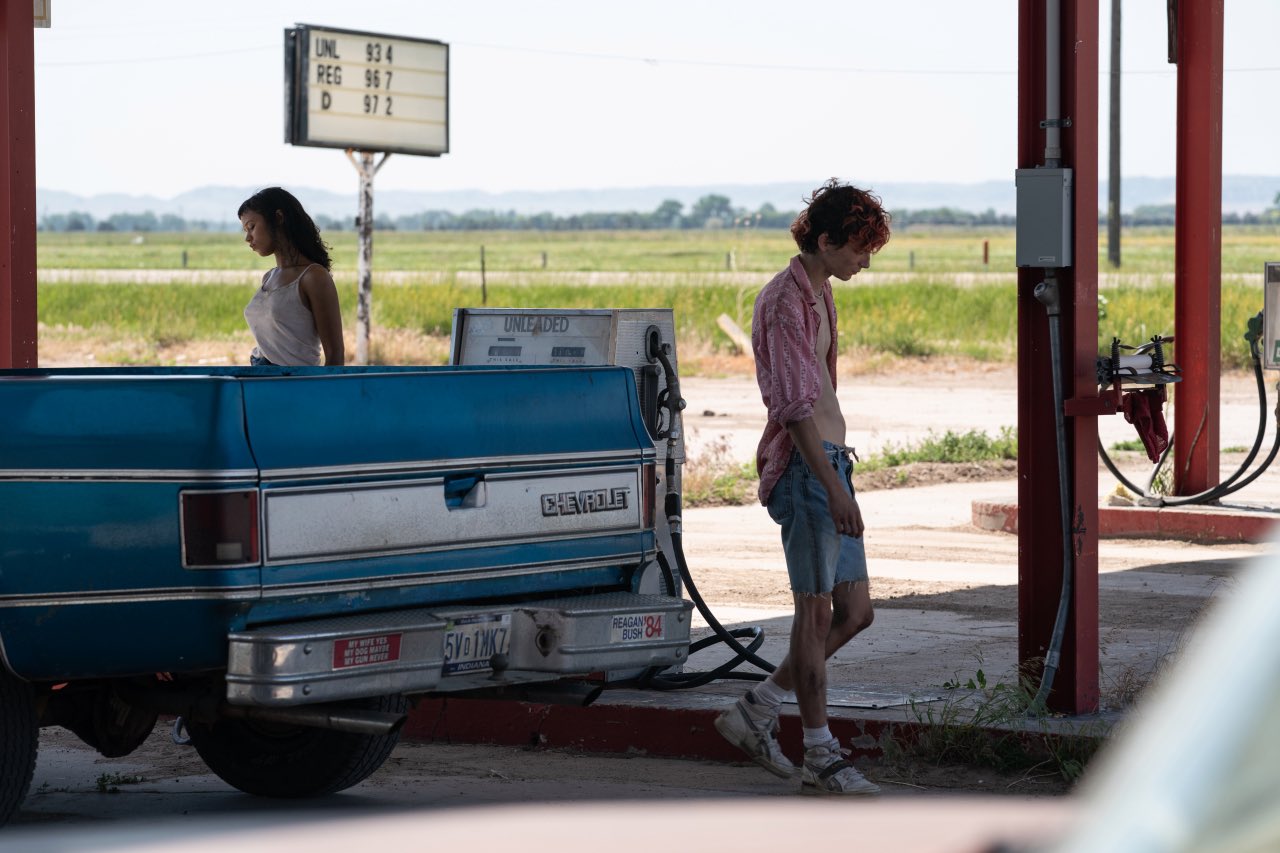 Well, David Kajganich’s script based on Camille DeAngelis’s book didn’t shy away from any of that and puts us right in the shoes of man-eaters. As nauseated as it made me, I must say this is an exceptional piece of screenwriting. It vividly imagines the unique dynamics and perils within a most tabooed, isolated societal group, and builds a story around situations, revelations of extremely high stakes. Whether it’s Maren meeting a fellow cannibal – an older gentleman played by Mark Rylance – for the first time and not knowing if she can trust him and his rules; or her finally finding her mother (played by Chloë Sevigny) and triggering a startling response, there’s genuine tension in each encounter. I also love that the script never resorts to good guy/bad guy labels for any of the characters. All of them, including the two protagonists, are just people trying to get by. This human, non-judgmental tone sets the film apart from exploitation fare and gives you much to think about. In one of the quieter moments, Maren suggests to Lee that they go somewhere, settle down and find jobs, ”you know… like people do”. And when Lee replies “You wanna be people? Yeah, let’s be them for a while,” the simplicity of the statement and what it says about otherness hit me in the gut.

With SUSPIRIA, Guadagnino proved he can do body horror and, being the maker of CALL ME BY YOUR NAME, he obviously knows a thing or two about romance. And I’m happy to report that he somehow managed to do both in BONES AND ALL. Make no mistake, this is hard horror and definitely not for the faint of heart. Guadagnino did not spare us any gory detail for the sake of the love affair. There are scenes and conversations in this film that would legit turn your stomach. Yet it must also be said that he shoots these acts of unspeakable brutality with incredible aesthetic care. There’s a murder scene in the middle of a corn field and a fight scene involving three characters in a bathtub that are both frightening to watch, but so stunningly lit and composed they could be freeze-framed and put on a wall. But what’s even more striking about Guadagnino’s direction is that it’s based on an understanding of the all-consuming nature of love and desire. Through his eyes, the terrifying, physically pain-inducing finale takes on a note of profound tenderness. Mesmerizing stuff.

Taylor Russell is a star. She carries the film and compels you to stay on this disturbing, revealing, heartbreaking journey from start to finish. A story this unorthodox, that requires so much of its audience, could not have worked without the warmth, the sheer human gravity she brings. Timothée Chalamet impresses too. I think it’s dope that he chooses to play a cannibalistic punk after leading a gigantic franchise as its prince, and there’s no trace of Paul Atreides to be found in an utterly committed performance that’s all grit and rough edges. Mark Rylance may have stolen the show though, playing the ultra-creepy senior cannibal Sully. Words can’t quite describe the vibes he gives portraying someone who’s evidently lived a life away from people, whose speech and demeanor seem so alarmingly… wrong. Final shout-out to Trent Reznor and Atticus Ross, whose score for the film contributes immeasurably to its tricky tone. The way they transition soothing synthetic beats into jagged guitar licks to map a subtle change in atmosphere is nothing if not masterful.

Friends I talked to after the screening didn’t seem too taken with BONES AND ALL and, trust me, I was not prepared to fall so hard for this one. But there’s something about its originality, violent romanticism and balls-out honesty that really got me. It will be very interesting to see if Julianne Moore’s jury agrees.