Just one year after THE CARD COUNTER (which I loved), 76-year-old writer/director Paul Schrader has finished another film that completed the trilogy he started with 2017’s FIRST REFORMED. Premiering out of competition at the 79th Venice Film Festival, MASTER GARDENER is a gnarly, shape-shifting creature that packs a variety of themes and layers. In typical Schrader fashion, the film unfolds with hushed, understated efficiency. But what it lacks in spectacle, it more than makes up for in ideas and allegories. People who like their thrillers smart and cool-headed will get a kick out of this.

As with the previous two entries in this trilogy about guilt and salvation, the film is told through a first-person narrator voice, in this case that of Narvel (Joel Edgerton). Narvel is the gardener on an southern estate called Gracewood, run by its matron Ms. Haverhill (Sigourney Weaver). When the film opens, Narvel and his crew are getting the gardens ready for an annual charity auction. Out of the blue, Ms. Haverhill asks Narvel to pick up and train an estranged grandniece, a biracial young woman named Maya (Quintessa Swindell) whose mother has recently passed away. Shortly after Maya started training at Gracewood, we begin to see the bad blood between the two women, and a past Narvel has been trying to forget slowly reveals itself.

Schrader’s screenplay is excitingly multifaceted and keeps morphing into something else. We learn pretty early on that Narvel has a white supremacist background from the hidden tatoos on his body, so having him care for Maya immediately creates narrative tension. Then, in a dinner scene at Gracewood, we find out the relationship between Narvel and Ms. Haverhill goes beyond mere employment, which raises the question of why she entrusted him with Maya and how he ended up at her estate in the first place. Through careful plotting, the script has these three characters engaged in an unpredictable dance, adding new colors to the dynamics between them with every change of step. 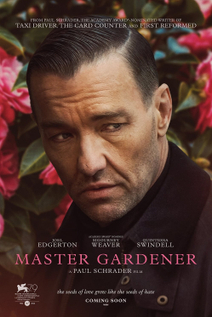 Following Ethan Hawke’s priest and Oscar Isaac’s card counter, Schrader found another fascinating, richly metaphorical profession for his protagonist/narrator. As noted in Narvel’s many monologues, gardening is a manipulation of nature, the goal is to impose order where there was none. This relates not only to the racial ideology that he used to subscribe to, but also to the more universal theme of whether we can forge our own path in life or help someone else find theirs in spite of our circumstances. It’s interesting to consider in this light the role of Ms. Haverhill in the reinvention of Narvel and what the latter is now trying to do with Maya. According to Narvel, gardening is also a belief in the future, in the fact that things will turn out as planned. This observation lingers in the air during the final shot of the film, a shot of great ambivalence where one senses a defiant hope and maybe also a hint of gloat?

The three main actors all delivered solid performances. Edgerton is magnetic as the introverted master gardener who keeps all his secrets and intentions inside. There are two sex scenes where he’s asked to take off his clothes. The way he assuredly, seductively complies in one instance and does so as an act of complete submission in the other tells you much about his character’s inner struggle. Weaver is always a welcome presence on screen. Although her role here is more supporting than co-lead, she provides the bite that many of her scenes require. The first meeting between Ms. Haverhill and Maya starts off cordially if somewhat awkwardly, only to end with some very frosty remarks from the older lady that border on threats. Her ice-cold delivery lands those lines like daggers and gives the exchange an unmistakable note of intrigue. In the scene where she asks Narvel to strip, the camera stays on her face as she takes in the view of a body marked by madness and hate. And whether that expression is one of arousal, pride or something in between, it’s one loaded look that communicates what no words can do. Just in case anyone needs reminding, Siggy can do naaasty, y’all.

MASTER GARDENER is not a film that will get you worked up in any way. Its tone is subdued, the conflicts it depicts mostly internal. And yet it proves a thoroughly satisfying ride for those same reasons and for the intellectual challenge it poses to figure out everything that’s left unsaid – about race, about second chances, about America.