Ok, so BLONDE premiered. Adapted from Joyce Carol Oates’ novel of the same name, it’s an artful reconstruction of Marilyn Monroe’s life that may alienate some viewers for its notably experimental approach, but one that offers an exciting alternative to the traditional biopic driven by a strong auteurist point of view.

The film begins in 1933, where we meet Marilyn (née Norma Jeane Baker) as a 7-year-old and her psychologically unstable mother (Julianne Nicholson in top, unhinged form). Mom’s delusions about a movie star husband who abandoned her because of Norma’s birth not only lead to incessant abuse against the child, but instill deep in her young mind the belief that Daddy will come back one day. Fast forward to Norma as an adult (Ana de Armas), who’s adopted a fancy stage name and trying to break into the movie industry. After being raped by a studio head, she gets her break and soon becomes Hollywood’s new leading lady. From then on, the narrative gets increasingly fractured as we are introduced to Marilyn’s various romantic relationships, abortions and miscarriages, substance abuse and eventual demise.

The story unfolds in general chronological order but not in a linear fashion. We would find Marilyn suddenly in the company of new partners, at a film shoot or premiere, or being made to abort another child. The events depicted don’t really amount to a coherent account of a life and the people who enter the picture tend to simply disappear again. You also notice that the narrative is far from objective or reliable, as fantasies and memories would bleed into the portrayed reality more and more. In other words, BLONDE is definitely not your typical biopic with a structure, an arc, where things add up to make a point or make you cry. It’s untidier, dreamier, very much subjective and interpretive.

I admire this approach of Oates and director/screenwriter Andrew Dominik, which reminded me a little of SPENCER in the liberties it takes with the reconstruction of a biography, except here it’s on a much more sweeping scale. Through the reimagination of an entire decade of Monroe’s adult life, we gain, if not an understanding, then an intimate impression of her as a person. There are the sexed-up but innocently euphoric moments she spends with Cass and Eddy, sons of Hollywood legends Charlie Chaplin and Edward Robinson, where you see the girlish naiveté of Norma that never quite left the bombshell Marilyn. There’s her first abortion where she runs out of the operating room and right into the fiery chambers of her childhood home, haunted by the memory of a baby being kept inside the drawer. These scenes are effective not because of their historical but emotional truthfulness. They give you access to a mind scarred by abandonment, fatherlessness and overnight celebrity. 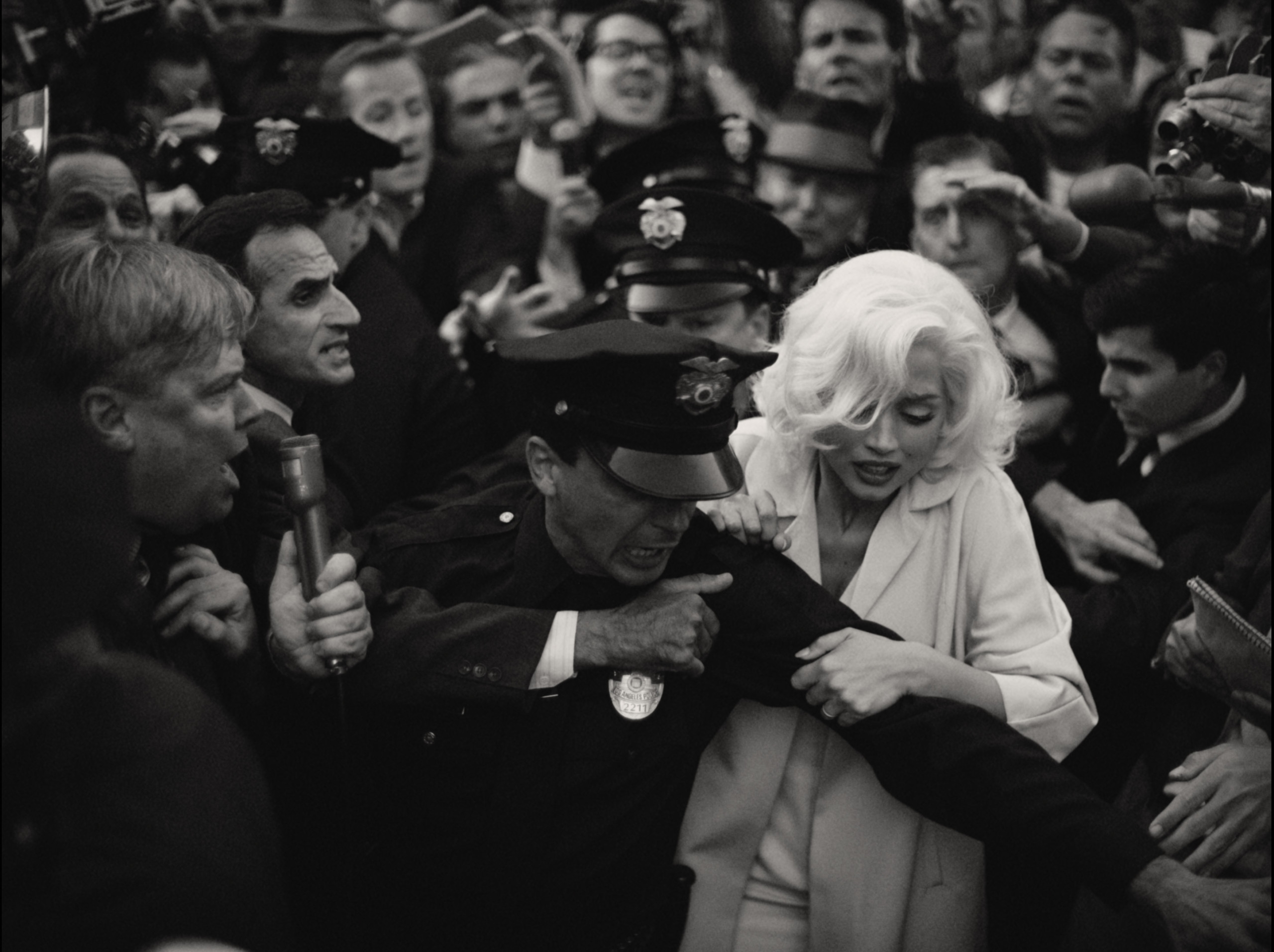 I also love the way Dominik’s film deals with the dichotomy of Marilyn and Norma. When an agent advises her against spending time with Cass and Eddy for her career and well-being, she’s quick to point out that it would be for the good of Marilyn’s career, but for whose well-being? The burden of being one of the most famous persons in entertainment history, of having a larger-than-life screen persona clearly weighs on her. At the premiere of GENTLEMEN PREFER BLONDES, when the whole (male) audience is captivated by her performance of “Diamonds Are a Girl’s Best Friend”, can anyone imagine the state of mind of the performer, sitting in the middle of that collective lust? De Armas’ expression of profound detachment as she watches herself projected over a gigantic screen is chilling and reveals the pain of someone struggling to hold on to their personality, or even just their sanity.

There was chatter about de Armas’ accent when the film’s trailer was released, but honestly this is a great performance where the imitation of speech only plays a small part. Of course de Armas has worked on Marilyn’s famously breathy voice, but more importantly she has acquired that unique combination of vulnerability and sex appeal that made Monroe so irresistible. You quickly grow used to her compelling presence and her portrayal of someone who’s essentially playing a character of her own. When she lashes out at Billy Wilder on the set of SOME LIKE IT HOT or scratch her own face in a later burst of rage, it’s shocking to watch as this so contradicts Marilyn’s goddess-like image but enlightens at the same time as to the person she is – signs that the performance has gotten under your skin.

Dominik’s direction is confidently abstract, impressionistic. He set out to deliver an edgy psychological portrait of an American icon and many of his choices really paid off. To shoot half the film in color and half in black-and-white (interchangeably, without identifiable pattern), for example, creates a volatile sense of rupture that approximates her experience. Employing elements of horror in the last part of the film, where Marilyn’s mental health is in crisis, also feels truthful, inspired.

In life, professional and personal pursuits are rarely tied up in a bow at the end, closures are elusive. That’s why I appreciate stories that dare to show the mess, the tragic unfulfilled-ness of how someone lived. BLONDE is probably not as crazy as you might expect, but it radiates a creative daring that’s worthy of Ms. Monroe’s legacy.

I guess, I don't want no drama? I didn't mean to only include lighthearted shows on my top ten list...

Universal has dropped a new trailer for Oppenheimer, Christopher Nolan's highly-anticipated biopic about the famed physicist J. Robert Oppenheimer and...

Today the Indiana Film Journalists Association has announced its winners for the best in film for the year 2022. Big...