by Megan McLachlan
in featured, News
1

Awards Daily’s Megan McLachlan details her take on the first weekend of the Toronto International Film Festival, which included Women Talking, the premiere of In Her Hands, and more! 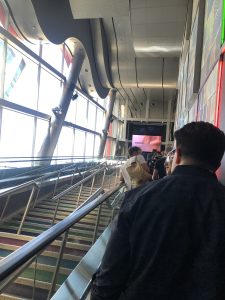 As I write this, there is silence.

Outside my hotel window, the Swifties have finally calmed down (ha!) since Taylor Swift descended upon the TIFF Bell Light Box theater for her In Conversation event. While I would have liked to have gone, tickets and access have been pretty tight at the 2022 Toronto International Film Festival, with even some press screenings “selling out” (more on that later!).

I’m not sure anything can prepare you for what TIFF is like. It’s like the mother of all film festivals, with King Street completely shut down with art installations, movie posters, and food trucks. The whole place is just buzzing, and this was even before Swift showed up. I kicked off my TIFF experience with one of the most-talked-about films to come out of Telluride, Women Talking.

I wasn’t sure of what to expect with this film, since from the initial descriptions out of Telluride, it sounded like a filmed play. “Talkie” movies are so tough to pull off. Sidney Lumet’s 12 Angry Men comes to mind for being the template of how to do a film that relies mostly on dialogue, and as I was watching Women Talking, it reminded me of that classic from 1957. Except what the men were arguing for in 12 Angry Men would not affect the outcome of their lives. They could walk away at the end having done their civic duty but weren’t directly faced with the consequences of their choice.

In Women Talking, there’s so much at stake. The men within the Mennonite community have repeatedly sexually assaulted the women, almost in a mischievous “flirty” way when you see them scurry from the women’s windows (although we never actually see the men’s faces). Women in most societies already have lesser power than men, but to be brought up in a world that preaches it not only brings about heated discussions around consent but also about these women’s own roles within the society. I found the film riveting, as it left me on the edge of my seat for most of it. Sarah Polley’s direction and script work hand in hand, where she highlights her tightly written screenplay through expert direction that feels both cinematic and organic. Every cast member is bringing their A game, and there’s never a false note.

There’s just something about Vicky Krieps. Between Phantom Thread, Bergman Island, and even M. Night Shyamalan’s Old, she’s always a standout performer. Even in the closing credit sequence of Marie Kreutzer’s Corsage playing at TIFF, which finds Krieps tossing her long hair and dancing by herself, I think I could watch a whole movie of that and be captivated. Krieps won the Best Performance Prize at Cannes for this Kreutzer’s film, in which she plays a loosely historical interpretation of Empress Elizabeth of Austria. Taking place before and after her 40th birthday, Elizabeth questions what’s to become of herself as a wife, mother, and public figure. With modern music and some purposeful anachronisms, Corsage is not for the history buff (especially with the ending), but the film further proves that Krieps is a star.

One thing I noticed about the films coming out of TIFF, especially with Women Talking, is how Hollywood’s #MeToo stories have evolved and become more nuanced. Paul Weitz’s Moving On is an example, anchored by Jane Fonda’s awards-worthy performance as a twice divorcee who has been living with a sexual assault for more than 45 years. As Claire, Fonda stays subdued for most of the film, before her anger and hurt finally bursts to the surface in a hospital reveal. I think it’s important for stories like this one to be told, especially from the point of view of a generation that had less resources than Gen Z and even Millennials.

The Origin of Evil

Sebastian Marnier’s The Origin of Evil might be the most fun of all the movies I’ve seen at the festival, with many twists and turns that shouldn’t be spoiled. Suffice it to say, the premise involves a woman (Laure Calamy) who reaches out to her estranged father Serge (Jacques Weber) in the hopes of reconnecting, but when she meets his family, all is not what it seems. The audience really reacted to this one in the theater, with big laughs, even if the material isn’t always supposed to be funny. Laure Calamy is excellent in a role that requires walking an acting tight rope; it’s the kind of film that really hinges on a performance like hers.

Awards Daily’s Joey Moser, Shadan Larki, and I stood in line both outside and inside for the press screening of Weird, Daniel Radcliffe’s Weird Al biopic, along with other fellow writers, only to discover that TIFF had let other press in more than an hour early and they scooped up all the seats (even though we were told to wait in line outside). This made for some very angry press members, especially since we stood in line not knowing that we were never going to get in anyway.

Because we missed Weird, Joey, Shadan, and I headed to the documentary In Her Hands, from directors Tayana Ayazi and Mercel Mettelsiefen, about Zarifa Ghafari, one of Afghanistan’s first female mayors in the months leading up to the Taliban takeover in 2021. Little did we know that not only were the directors and Zarifa herself in attendance (!!), but also executive producers Chelsea and Hillary Clinton, who made a surprise introduction for the film.

The documentary is not to be missed and really provides a crucial inside look at both the rebels and Afghan families affected by the takeover as well as the Taliban itself. It’s mindblowing to think about the effort that went into getting this footage, especially when one of the co-directors is also a woman/resident of Afghanistan. Zarifa is a hero, and during the post-screening Q&A, she got tearful talking about her home country and encouraged everyone to visit.

Sebastian Lifshitz’s tender documentary examines a community of cross-dressers in the Catskills in the 1950s and 1960s with interviews from family members as well as some of the surviving dressers themselves. (Note: I use the term “cross-dressers” because that is how they refer to themselves in the documentary.) The community, known as Casa Susanna, is named for one of its founders, Susanna, born as Tito and married to their cis-gender wife and fellow co-founder Maria. With very little photography or film used to document Casa Susanna in the 1950s and 1960s, in order to protect the attendees, Lifshitz relies on interviews from those dressers who are still alive to drive the story. Hearing them explain what what this communal acceptance felt like is incredibly moving. It further proves that the transgender community isn’t a new one to pop up in the last 10 years; they’ve always been here.