by Joey Moser
in TIFF
0

I have always wanted to come to the Toronto International Film Festival. Maybe it’s because I remember loving Toronto from my last visit when I was a teenager or maybe it’s because so many films and online friends flock to this festival. Last year, I told myself that I was going to come to TIFF, so I am thrilled and privileged to be here for the first time for my first ever (!!!) major film festival.

Unfortunately, I will only be here for the first long weekend of the festival (I should just quit my day job and move here, right?), but being back in this huge city energized me from the very beginning. After two long flights, a confusing train ride, and a walk to the hotel (I am thrilled with how many posters and signs there are for The Woman King), I chucked my luggage into my hotel room, and ran out to catch some films.

Women Talking
“We will not do nothing,” is a line that burned in my brain as I watched Sarah Polley’s astonishing Women Talking. I thought this ensemble of women (which includes Claire Foy, Jessie Buckley, Judith Ivey, and Rooney Mara) was going to be confined to a small barn for the entire film as they discuss what to do about the deliberate and continued physical and emotional violence forced upon them by their husbands. Being raped or beaten is as common as reading scripture in this community, but time is running out to figure out what to do about it.

How do you forgive someone who is supposed to love you but instead only gives you a fist? What struck me so much is how Polley allows the tension to reach a feverish boiling point but peppers humor throughout without diffusing the anger or tension. Allegiances change and flow, and you might wonder what will happen if they leave their colony. Women Talking isn’t about where they are going as much as it is about the painful, complicated decision to leave in the first place. Everyone will have a favorite performance from this (and everyone is fantastic), but I was mostly drawn to Foy and Ivey. It’s intimate but you will feel your breath catching in your throat as time ticks by.

Corsage
I joked with Megan that every up and coming actress needs to play an unhappy royal at some point in their career, and it’s Vicky Krieps’ turn in Marie Kreutzer’s witty Corsage. Turning 40 has never felt so freeing.

Krieps embodies Duchess Elisabeth Amalie Eugenie in Bavaria, Empress of Austria and Queen of Hungary with a flourishing, playful energy as she barks at the servants to yank her corset tighter or when enjoying the thinnest of orange slices for her meals. There is always a look on Krieps’ face that I never want explained to me. It’s as if she is about to wink or smirk even when her eyes are full of sadness or worry. I could not stop staring at her eyes the entire time throughout this film.

That unpredictable energy allows Corsage to escape the staid or sedative royal biopic. Elizabeth worries about her husband’s attraction to a younger woman but she also is fascinated by the women confined to a caged beg in a sanitarium. In one scene, she visits wounded soldiers and he asks her for a cigarette. She lights two and makes room for herself as they just stare at the ceiling and people stare with curiosity.

The Inspection
There is one small gesture at the beginning of Elegance Bratton’s queer boot camp drama, The Inspection, that destroyed me. When Ellis French (Jeremy Pope) stops by to visit his mother, Inez (played by Gabrielle Union), she doesn’t unlock the door right away and won’t let him in if he is in trouble. He asks for his birth certificate so he can join the Marines, and she tells him that the piece of paper is one of the last things she had of the baby she thought she was going to have. It’s crushing. And then Ellis gives his mother a kiss on the cheek, and we see Union involuntarily melt from the affection. She refuses to accept her son’s homosexuality, and she has put a stern wall up so high that Ellis may never be able to climb over it.

Ellis doesn’t say much to his fellow recruits–maybe he’s scared or nervous–but his physical accomplishments are ignored when the rest of his recruits discover that Ellis is gay. The Inspection is set during the height of Don’t Ask, Don’t Tell, and the other young men, especially those who were born into proud military families, cannot accept that a queer person can be strong, tough, or bear the same honors as them. Ellis finds a friend in Rosales, a commanding officer played by Raúl Castillo, but Ellis also feels an intense attraction to him.

Pope proves, one again, what a strong leading man he is as he commands every frame. He expresses so much with his defiant, tear-filled eyes and his clenched jaw as he lives in a world that doesn’t want him but will accept his service. Union needs to be given more roles like this because she truly delivers.

Runner
I had no idea what Runner was when I walked in the theater, and I highly recommend going in blind to as many films as possible.

Marian Mathias’ film is lean and striking. The film centers on Haas (Dutch for ‘runner’ or ‘hare’), an eighteen-year-old girl living with her alcoholic father in rural Missouri. When he suddenly dies, she must take his body to the burial plot, but it is delayed by several days of rain, and she befriends a quiet young man named Will as she waits for the weather to clear.

Haas’ father left her with considerable debt, and you can tell that she is not equipped to take any of it on. Her father’s absence didn’t teach her about what she might need to do as she grows into adulthood. There is something very sad about how quiet Haas is even though she lights up whenever she is around Will. The sound of the wind is haunting as Mathias films stark plains and landscapes. It reminded me a little bit of the town from In Cold Blood. It’s muddy with wide open spaces.

In Her Hands
Seeing this Netflix documentary was purely an accident. The first Press & Industry screening of Weird” The Al Yankovic Story was supposed to take place on Friday afternoon, but the space filled up far earlier than expected (leaving a lot of press and journalist angry). Since we were in the TIFF Bell Lightbox already, we mozied over for Tama Ayazi and Marcel Mettelsiefen’s film, In Her Hands. Before the screening began, producers Hillary and Chelsea Clinton came out to present the directors, and they received a standing ovation. You could feel the energy in the room swell as people freaked out to the surprise appearance.

Zarifa Ghafari became one of the first female mayors of Afghanistan when she took office in 2019, and she continued to face resistance from men throughout the country. Her bodyguard and driver would escort her through Taliban ruled territory with one hand on the steering wheel and one on a pistol in case someone drove up to the car to try and assassinate her. The film chronicles her reaction as she watches American troops withdraw from Afghanistan as United States occupation comes to an end. We also see how she was affected by fleeing to Germany in 2021 and how she struggles with the assassination of her father.

Hillary Clinton said before the film, ‘You will wonder how these filmmakers for the footage that they did,’ and I thought that the entire film. There are direct interviews with Taliban leaders and fighters, and this story is so immediate, shocking, and heartbreaking. 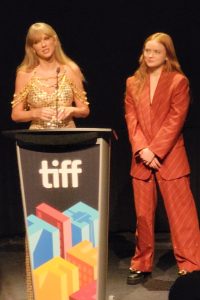 All Too Well: The Short Film
I am not going to talk much about the event itself, because I will be posting a separate piece about how Swift’s film pertains to the Live Action Short Film race later this season. Nothing could’ve prepared me for the insanity of the event. The All Too Well screening was one of the buzziest of the early days of the festival. There were young people camped outside the TIFF Bell Lightbox all morning and afternoon hoping to get a rush ticket or, perhaps, to see the singer herself. Even though I had a general admission ticket, my screening right before it was scheduled to end 12 minutes before All Too Well was planned to start. I skipped that screening, because the line as insane, and I was nervous that I wasn’t going to nab a seat.

All I can say now is that if Taylor Swift can keep doing events and speaking on her influences and now much she loves filmmaking, she could sway some voters. All Too Well: The Short Film clocks in just at ten minutes, but you can see her influences from marital dramas of the 1970s all over it. The print we watch, the first showing in 35mm, was absolutely stunning. The colors were so crisp and clear, and it made you want to reach for a cozy sweater. More to come on this event!

Bros
I had seen Bros a few weeks ago for an interview, but I loved it so much that I knew I wanted to see it with a crowd. This was the film that Billy Eichner was always meant to write, and it was, by far, my most raucous screening so far. I will be posting a full review of this one soon, so I will talk briefly about the even.

At the Princess of Wales Theater, I was probably the third row from the top, but throughout the film, I could hear the laughter rumbling up from the orchestra level. Bros follows Billy Eichner’s Bobby Lieber, an outspoken queer activist who starts dating a muscled jock named Aaron, played by the dreamy Luke MacFarlane. Bobby is convinced that Aaron isn’t attracted to him, and it seems that Aaron is intimidated by Bobby’s loudness and intelligence.

It’s not funny because I’m gay and I get all the references but because the screenplay is so smart and layered…and it just happens to be about gay men dealing with group sex and looking at the future. I love love love this movie, and it was a great way to finish my day. When Billy Eichner and the cast took the stage for the brief talkback, they were met with an excited standing ovation. Eichner yelled out into the crowd, “It needs to be longer than the one for The Whale!” Eichner’s film is about not being afraid to make space for yourself, and I’m so glad that Eichner is following his character’s own advice.