by Megan McLachlan
in featured, News
4

Awards Daily’s Megan McLachlan reviews The Woman King, dinner with a two-time Academy Award winner, and what she thought of The Fabelmans.

Compared to other film festivals, the Toronto International Film Festival can feel a bit like The Hunger Games. Even though I drew an earlier number for tickets than some of my colleagues, because of some glitches on the TIFF site, I didn’t get many of the films I wanted during my stay in Toronto—and was forced to even book tickets after my stay just to fulfill a necessary quota to get any tickets. And when you actually do go to a press screening you have access to, you better get there early (maybe at least an hour) if you want to get in.

Luckily, I was able to get in pretty easily for The Woman King press screening on Saturday morning at 9 a.m. (probably because so many people assumed they’d just wait and see it when it opens on September 16).

Following the screening, I posed the question on Twitter whether there was anything Viola Davis can’t do, and I’m pretty sure it’s nothing. I hate the comparisons to Meryl Streep, because Viola is a completely different actress, distinct from Streep. In The Woman King, inspired by a group of real-life 18th and 19th century female African warriors who defended their kingdom, Viola at 57 years old gets completely ripped to play a bad-ass warrior (and this was AFTER she played Michelle Obama!). She constantly amazes me, as she does with this surprisingly internal performance. One thing I love about Viola Davis characters is that they always have a secret, and Davis’s Nanisca has one that I will not reveal but that adds depth to the story.

While watching Gina Prince-Bythewood’s film, it made me think of classic films like Spartacus and how they don’t make movies like this anymore. Then it also made me realize that they’ve never made movies like this for women of color, which makes this a fresh take on a classic historical epic. I’m not sure how much this film will become an awards player, but I see more of it as a box office one. The fight sequences are impressive, and The Underground Railroad‘s Thuso Mbedu really shines next to Viola and other stand-out Lashana Lynch. By the end of it, I wondered if there would be a sequel or spin-off in this series, just for the wealth of stories within this universe. To be honest, I’d rather see more from this series than Marvel.

After being shut out from some press screenings, I retooled and prepared for the Sony Pictures Classics Dinner at Morton’s Steakhouse. Since I had no idea what to expect, this being my first TIFF and all, I took an Uber there, and during the ride, my driver told me he was a refugee from Afghanistan who had fled to Canada last August during the Taliban takeover. I told him about how I had just seen a documentary called In Her Hands about Zarifa Ghafari, one of Afghanistan’s youngest female mayors, and we chatted about what his year had been like in Canada. Like Ghafari, he missed his home country terribly, which was heartbreaking, and he also detailed what a beautiful country it was (much cooler in temperatures than I would have imagined!). It really put some added perspective on that documentary.

When I got to Morton’s, I was one of the first ones there, so I ordered a martini and chatted with Christian Blauvelt, executive managing editor at Indiewire, when a man came up to us and asked what we were drinking. I told him martini, and he said it was too early for him to have that. I said, “Oh, come on! You can do it!” and we laughed. When he walked away, Christian told me that that was Michael Barker, head of Sony Pictures Classics, who I had just playfully chided.

Soon, Christian and I weren’t the only ones in the room, and it filled up with press like Joey Magidson at Awards Radar, Jamie Broadnax from Black Girl Nerds, and others. We watched Natalie Portman come in with her husband, Benjamin Millepied, who directed Carmen, which was playing at the festival. Suddenly, Joey pointed, “There’s Bill Nighy!” and my immediate reaction was, “The Science Guy?” before realizing my mistake.

Eventually, we were seated at our tables, and I was seated across from Florian Zeller and next to two-time Academy Award-winning screenwriter Christopher Hampton and his long-time partner Tiana (and her dog Dancer). I talked to Hampton about his wins (Dangerous Liasons, The Father) and nominations (Atonement), and he was an utter delight to chat with. Since other press members needed to excuse themselves to go to The Fabelmans at 9, I stuck around (obviously—I had nowhere else to bel!), and Morton’s decided to merge our tables, so eventually I found myself with The Son‘s Laura Dern and Hugh Jackman in addition to the director and screenwriter. I ended the night with a wicked case of hiccups on my ride home, and this photo I snapped for the group. 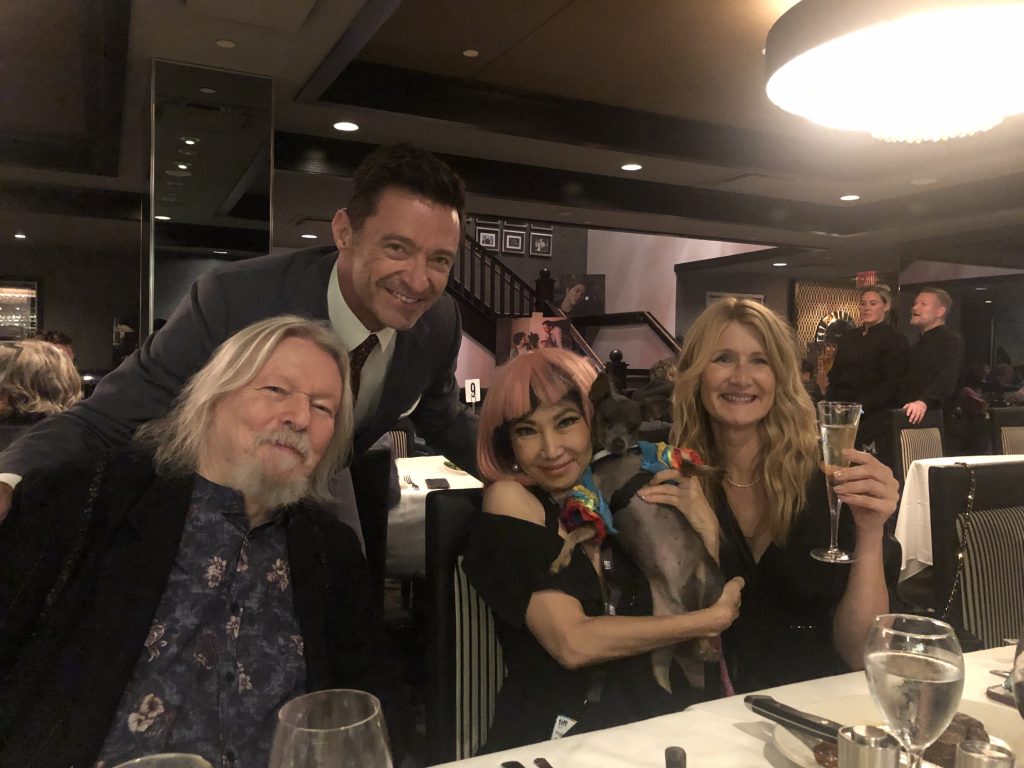 Black Girl Nerds’ Jamie Broadnax advised me to get to the 8 a.m. Fabelmans press screening at least 90 minutes ahead of time if I wanted to guarantee my spot, so Joey Moser and I woke up at the crack of dawn, stocked up on some Starbucks, and waited outside of TIFF Bell Lightbox. Cinemablend’s Mike Reyes told us that there was supposed to be a continental breakfast (!!), but once we got into the theater and saw the spread, no one wanted to get out of the line for fear of losing their place, so literally dozens of pastries stared at everyone for 45 minutes.

The Fabelmans really surprised me, in that to me, it feels like the least “Spielberg” film when it’s probably the most “Spielberg” one at its core. There are certainly hallmark stylistic choices, but the attention to character with Michelle Williams’s Mitzi, based on Spielberg’s mother, is unlike anything I’ve seen from him before. Spielberg has often been criticized for his lacking female characters (something Fabelmans even playfully pokes at), but maybe Mitzi is the one we’ve all been waiting for. When Williams is not on screen, you miss her and want to know what she’s doing. This is also a credit to Williams’s attention to the character and versatility as an actress. If she doesn’t win the Oscar for this role, I will be completely shocked.

Some of the story meanders a bit during its 2.5-hour runtime (I could have done without a prayer makeout sesh scene that slows the movie down toward the end of the film), but the Fabelmans family thread and their secrets is very compelling, almost taking away from the Spielberg-as-a-young-filmmaker aspect. A scene where Sammy (Gabriel LaBelle) puts together a film for his mother is especially masterful in its execution and editing (kudos to film editors Sarah Broshar and Michael Kahn). Seth Rogen is also really good as “Uncle” Benny (a role that could easily be played as slightly creepy and never is!), and Paul Dano might be the most underrated performer of the group for playing a sort of fuddy-duddy who deep down is just as much of an artist as his son.

That’s it for my TIFF experience! Thanks for having me, Toronto!