Download: The State of the Race – Through the Lens of the Golden Globes

The landscape of the Oscar race has changed many times in the 22 years I’ve been covering them, often in unexpected ways. When I look at it now, I think how good we used to have it — so good that we had the luxury of complaining about how bad the Oscars were. That hasn’t changed in all of these years: people still love to hate the Oscars. The only difference is that now, they’re barely there. They’re hanging on through changing times, a changing industry, a fourth turning. One generation, the Boomers, is on the way out. A new generation, the Zoomers, is on the way in. What does that mean?

But either way, the Oscars are not dead yet. Can they live to be 100? Maybe. I hope so. I was heartened by a young person I heard from. He is just entering the world in his early 20s and has been reading this website to win his Oscar pool. Somehow he’s still obsessed with the Oscars. The Oscars will live on as long as people like him exist.

Hopefully people will still want to go see movies if movies are so good they can’t stay away. That’s really the key to all of it. Tell great stories, make great movies, and people will come, Ray.

The Critics Choice Awards have taken a giant leap forward in the past few years, and did so even before the Golden Globes were canceled. They made news because so many stars attended, not to mention a story about Jane Campion that went viral. They also have the potential to become influential as long as people watch the show — Oscar voters, mainly.

The Golden Globes, however, are slightly different from either the Critics Choice voters or the industry voters like the Screen Actors, Directors, and Producers Guilds. Prior to the “freak out” at the Globes, they were a big show people watched. After the “freak out,” they will likely be slightly more hesitant with their choices across the board. The last thing they’re going to want is bad press. I hate to be the bearer of bad news, but in a sense, where the press is concerned (and no offense intended but) — you have to kind of stick a fork in it.

Most people who will be covering the Globes will be doing so from, I predict, a social justice lens. Meaning, they’ll be looking at the Globes to see whether they succeeded or failed in fixing what they believe was the core issue: matters of race and/or equity. The only problem with that is that voters, or audiences, have only seen the results of their process. Of all of the awards bodies, the Golden Globes were generally the most inclusive in terms of their membership and their awards. They nominated, for instance, Ava DuVernay for Selma and Regina King for One Night in Miami in Best Director, when no other major group did.

Whatever problems people (namely publicists) had with them wasn’t seen on the show itself. They didn’t put on a show that was ever not-inclusive. But the narrative around the “freak out” will require that they make moves to avoid bad press when it comes to matters of DEI (Diversity, Equity, and Inclusion). Unfortunately, taking care to not get bad press in this regard, no matter what awards show you’re talking about here, can sometimes mean a weaker show. That’s because they’re not focused on putting on a good TV show for the widest audience possible. Instead, they’re ever-watchful of pleasing the most judgmental viewers on Twitter and in the media.

But let’s just shove that aside for a moment and pretend there never was a “freak out” and look at the Oscar race through the lens of the Golden Globes. That means we focus on dividing the Best Picture race between Best Picture — Drama and Best Picture — Musical/Comedy.

What are the films that might land in Best Picture — Drama right now? It’s still hard to say because there are many films we have not yet seen. She Said, Till, and Avatar, are three off the top of my head that all might be in that category.

First off, do we have any musicals?  We have one big one: Elvis. Maybe? Also, this site says that Netflix has a musical version of A Christmas Carol. There is also Guillermo Del Toro’s Pinocchio. And perhaps Roald Dahl’s Matilda: The Musical.

As far as comedies go, there is Everything, Everywhere All At Once, which might qualify in that category. Knives Out: A Glass Onion Mystery, seems to be an immediate frontrunner. Bullet Train. Maybe Don’t Worry Darling? Fire Island? Bros? There is also Official Competition, reuniting Penelope Cruz and Antonio Banderas.

It’s possible we could get a movie star extravaganza if George Clooney and Julia Roberts show up with Ticket to Paradise. A little old school Golden Globes action with this one. Front row, big smiles. Come on, it writes itself. If they put Bullet Train in there, then you have the Ocean’s trifecta – Julia, George, and Brad Pitt. Make it happen, Golden Globes.

Hopefully, there won’t be “Freak Out,” the sequel wherein the big stars refuse to show. Don’t do that, movie stars. You have one job.

The comedies are looking somewhat promising for a good show. What to watch for is whether Rian Johnson makes it into Best Director and/or Screenplay for Glass Onion. In general, we’re looking at the Drama category for Best Director heat.

Now, the thing about the Globes (impending freak outs notwithstanding) is that celebrities are the main reason people turn in. All that glitters must be GLOBES. Big stars. Big smiles. They have ONE JOB!

I know I won’t get my Christmas wish of Ricky Gervais, but some of that can be mitigated if they invite big stars — and not just the ones that have a lively political, front facing social media profile. Those will likely count as negatives in terms of ratings. Better to get those everyone likes who haven’t alienated people with crazy interviews or tweets. I know that’s asking a lot, since most of the big stars feel they must be activists now — but I promise you, it’s better if you don’t. Okay, just kidding. You’re not going to sacrifice your core principles for the Golden Globes. But get with the program here. This is Operation: Save the Oscars.

I’m thinking Matthew McConoughey, The Rock, Tom Cruise, Dave Chappelle, etc. If it resembles the Democratic National Convention, say goodbye to the ratings. Ha ha, only kidding. Except not. People have a choice to watch or not to watch. If they think it’s going to be very wealthy celebrities scolding the working class or giving long lectures about climate change, that ain’t gonna cut it. That’s all I’m gonna say about it.

In other words, this is the idea:

The hosts will probably be Tina Fey and Amy Poehler, which is fine. They’re funny. I am just not sure you’re looking at a ratings bonanza there. But maybe! I figure it like this: Hollywood after 2016 lost half of its audience for these awards shows. People on the Left think that’s just fine. They’re okay with having weaker ratings as long as everyone is on the same page, ideologically. And okay, if that’s the plan, who am I to say anything? But if they want the big ratings, the old school ratings, they need to get someone audiences know will stick it to “the man” as opposed to feeling much too afraid to do that.

I’m just going to keep saying it until they announce the host. Then I promise I will shut up.

At any rate, with the possible exception of Glass Onion, Drama is likely where our Best Picture winner is. We never know, of course, but I’d be highly shocked if Steven Spielberg and The Fabelmans weren’t in there. Avatar is probably in. Babylon, most definitely. That’s three slots already. That leaves us with two. Women Talking and She Said might be going to head to head, which is unavoidable.

The Banshees of Inisherin seems very Globes-friendly, as does TÁR. We can’t really make our predictions until we see everything.

As you can see by the charts below, Best Director more or less follows Best Picture Drama, with a few exceptions here and there. Very prominent directors like Rian Johnson or Baz Luhrmann, for instance, would cross over. Thanks to Marshall for helping me with them. 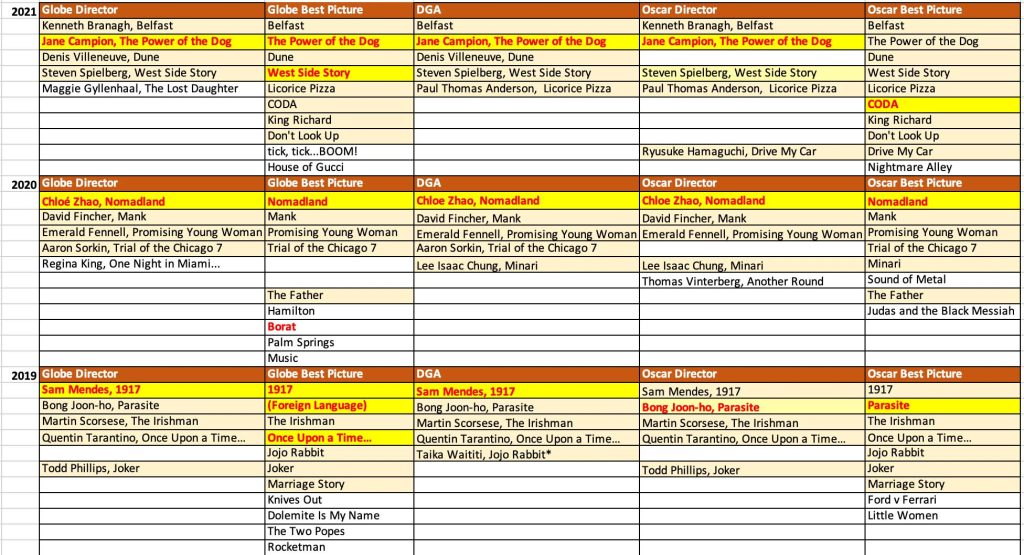 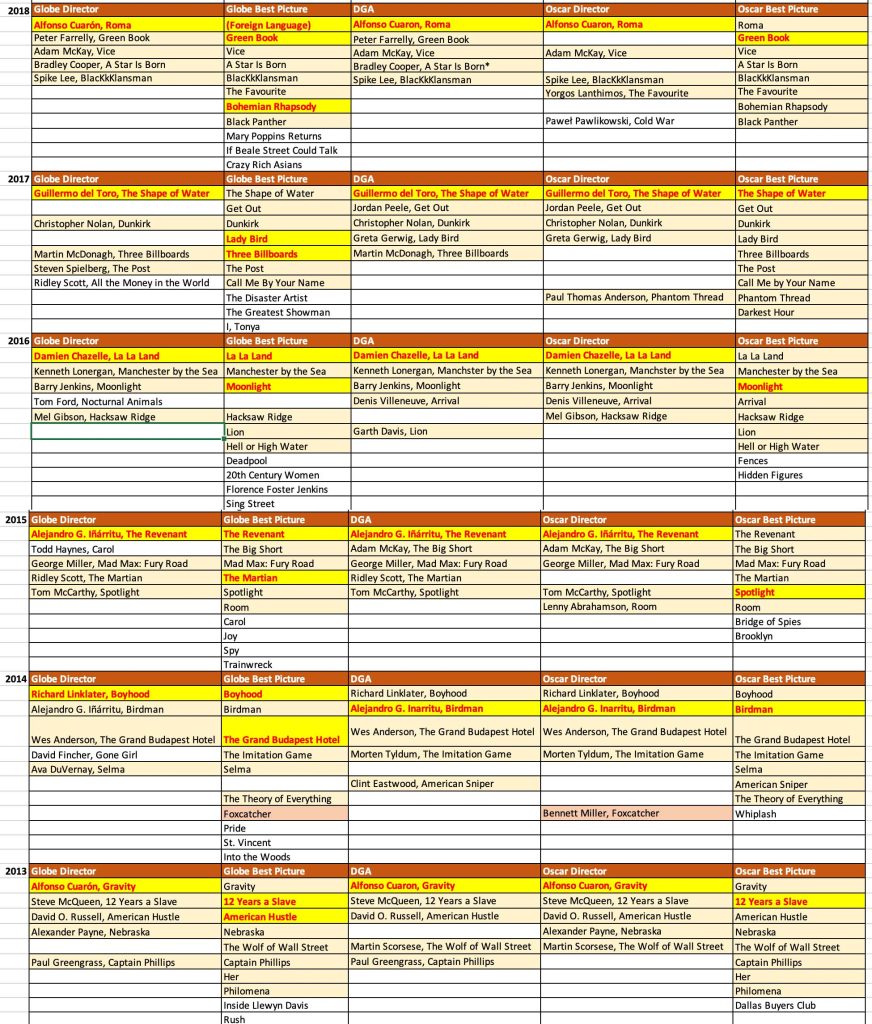 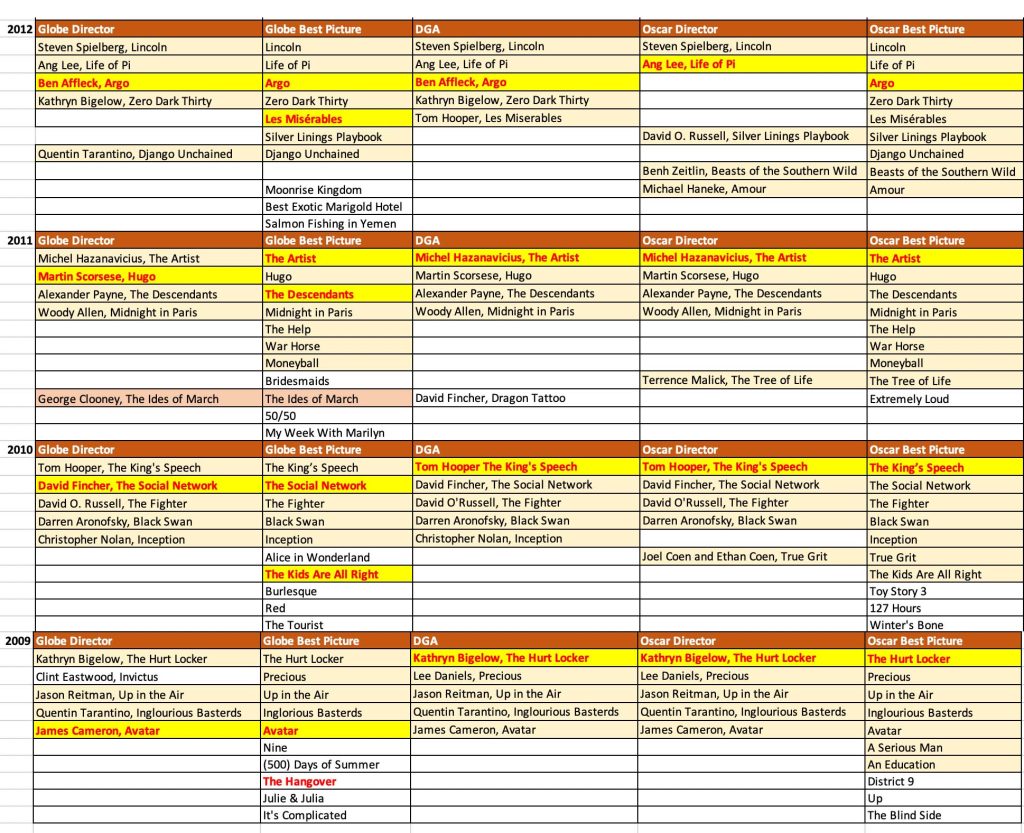