The Fabelmans – Spielberg’s Tribute to Those Who Made Him

Download: The Fabelmans – Spielberg’s Tribute to Those Who Made Him

Before Oscar Night every movie will have run the gauntlet — months and months of being batted around on lists, deconstructed by Twitter’s hive mind, turned inside out and upside down, set up to succeed, set up to fail.  By the end of it, everyone is walking around in the afterglow of a party that went on too long.

No movie this year has come in with as much pressure as Steven Spielberg’s The Fabelmans. There haven’t been any movies yet that “feel” like the frontrunner, with the possible exception of The Daniels’ Everything Everywhere All at Once. There are still movies left to see. Spielberg’s team is second to none, however.

A screenplay co-written by Spielberg and Tony Kushner, music by John Williams (I mean, come on, man, are you kidding me? Like, the greatest film composer who ever lived), editing by Michael Kahn and Sarah Broshar, cinematography by Janusz Kaminski, and then the man himself, the legend who needs no introduction, the master Steven Spielberg at the wheel.  Anyone alive today, who is able to buy a ticket to a Steven Spielberg movie playing in the movie theaters should consider themselves lucky. These days are precious. We should count them. We might be living through the last gasp of a dying star. Not Spielberg, but the experience of movies in movie theaters.

The situation could not be more dire, even with the MVP Top Gun pulling in a hefty haul of $700 mil, adults aren’t going to the movies much anymore. They have to have a good reason and lately, Hollywood isn’t interested in giving them one. They seem more interested in “teaching” them how to “be better.” For Good Puritans this fulfills their need for a central, collective purpose. Movies as sermons – why not?

Great directors are born, not made. Some can be made, if they work hard enough at it, if they’re given a proper critique and something to work towards. But the John Fords, the Alfred Hitchcocks, the Jane Campions and the Steven Spielbergs — they have the right stuff to begin with, a curiosity that pulls them towards visual communication. Then something ignites, a spark, that moment where they think — I can do that. I can become a storyteller with pictures rolling by at 24 fps.

The Fabelmans is about that moment in the life of Steven Spielberg, the child of Arnold and Leah, older brother of three younger sisters. Being Jewish and moving around a lot left the young Spielberg feeling like an outsider to begin with. He was always watching more than participating. The difference between doing that and twiddling your thumbs in misery or doing that and picking up a camera to start taking that world that is so remote, so far out of reach, and turning it into a world remade by you? What better way to navigate coming of age.

The Fabelmans is a love letter to his parents, and especially his father. One might be inclined to think it’s a love letter to his mom. But really, this is more about his father, a mostly unknown wunderkind in his own right, a genius who had a hand in helping to design and produce main frame computers and data technology. He always wanted for his boy a serious job where he made things other people could use. Turns out, his boy did just that. He made things other people could love and occasionally use.

Those of us who grew up on Spielberg movies have used them as a touchstone back to the thing we know best and love so much: movies.

Spielberg’s pops lived to be 103, so he was around to watch his son’s star rise. No doubt he also understood the genius behind the work, which is present from his first films, even his crude films made as a teenager. His mother was his muse and the one who had pie-in-the-sky dreams for herself and her son, but it was his father’s steady hand and support that, I think, guided Spielberg in the direction that would ultimately serve him well. Yes, he’s the Boy Wonder no doubt, he’s also the guy who turns in movies on time and under budget.

What I came away with from The Fablemans was that Spielberg loved his parents for different reasons, but ultimately, it’s his father he needed the most and his father he counted on the most. This helps explain, or answer, some of what many of us have wondered about Spielberg all of these years. Why the heavy father themes in his films? Why was it so important to him? Well, now we know. His father held it all together. His father never wavered. His father gave him the train tracks when the train derailed.

The Fabelmans is one of a new wave of films that could fall under the banner of “don’t let movies and movie theaters die.” It’s much more than that, of course, but there is a sense that we’re living through the last gasp of a dying empire, an Empire of Light, as Sam Mendes remembers it, a Belfast, as Kenneth Branagh remembered it. The big screen and those whose lives were shaped by it feels suddenly like an endangered species.

There are plenty of Easter eggs in this movie, too, if you know where to look for them — like boys on bikes riding in formation (ET), death on the battlefield in WWII (Saving Private Ryan), not to mention a fascination with crashes (Duel), a beach movie (Jaws), and of course the big themes that run through all of his work, like the strong influence of John Ford.

Great directors all have one thing in common: they like to watch. Meaning, they prefer to be on the outside watching the rest of us flail around helplessly in our daily lives. It is partly about us as people, but it’s also about what they see when they look at the frame. Color, light, action, movement, cut. They speak the language of film but it’s sometimes harder to turn within and tell their own story of the how and why of it.

As a lifelong fan of Spielberg, I was in heaven watching a film explain the how and why of it. His life seemed to be shaped by love and affection from his family, but perhaps coldness and sometimes cruelty from strangers. Maybe he grew up not trusting this world completely but he somehow was able to hold onto a kind of childlike wonder for it all. This, the movie tells us and it’s quite apparent throughout, he got from his mother. 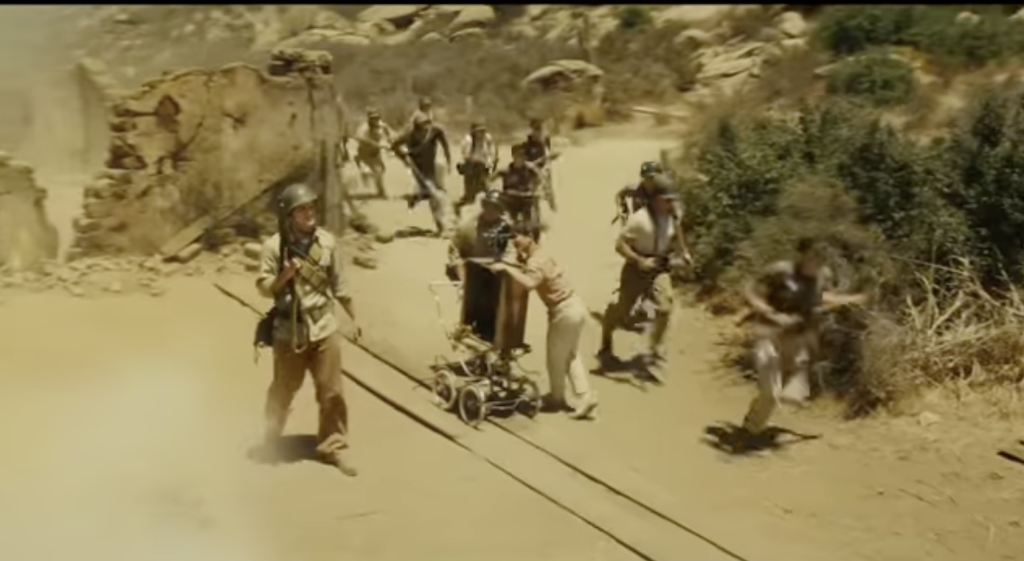 His father is the science, his mother the art. Her sense of wonder, joy, and slight emotional imbalance was not a wavering flame in the mind of young Spielberg, but a raging wildfire, and it’s one he has fostered and retained all of these years later.

Does this mean The Fabelmans is going to win Best Picture? How could we ever get that lucky, I mean really. Anyway, that’s the wrong question. The better question is will people watch the Fabelmans? I hope so. It is most definitely looking at nominations across the board. Paul Dano was, to my mind, best in show but Michelle Williams will certainly be considered the central performance and captures the spirit of Leah Adler.

Science and art, as she puts it, were the two equal and opposite forces co-mingling to produce the talented Spielberg. Courage to try and fail he got from his father, as every scientist knows there is no shame in failure, only in abandonment. If the wonder inside of him kept him making movies, the courage to fail kept him from making movies after making movies that weren’t always well-received. That’s it, though, that’s the whole thing. You try, you fail, you try, you make The Fabelmans.