[Have you joined out mailing list yet? Every day we send out a curated list of the most important headlines relating to the Oscars, movies and other stuff. It’s free. Check it out here]

In the last few days, we’ve seen some moves in the Best Actor race, which is far from settled. There are still some open questions with regard to the nominees. Where Best Actor and Best Supporting are concerned, they usually come from a film that was nominated for Best Picture.

As always, in terms of Oscar history we have to look at nominations when there were just five Best Picture nominees (1944-2009) and when there has been an expanded slate (2009-present). The way it seemed to work was that in the era of five Best Picture contenders, sweeps were much more likely. It was far more common for the Best Actor or the Supporting Actor winner (or both) to match Best Picture. Now, in the current era of the expanded ballot, it is rarer that both Best Actor or Best Supporting goes with Best Picture.

With the expanded ballot, voters like to split up the biggest prizes among the most popular films, which makes sweeps very unlikely now. That’s why you see Best Picture winners with such a low amount of Oscars. You can’t see any movie win like nine or ten Oscars anymore, not with the expanded ballot. Both Best Actor and Best Actress tend to be stand-alone wins for a film that people liked, just not enough to award it Best Picture.

But it still does help to be nominated for Best Picture, and that’s especially true with Best Actor and Best Supporting Actor.

So first, let’s head over to Erik Anderson at AwardsWatch for his Best Actor predictions:

And then he has:

Erik has both his Best Actor and his Best Supporting Actor winners in potential Best Picture contenders. Going back to 2009, the only winner in either category that wasn’t in a Best Picture nominee was, of course, Jeff Bridges in Crazy Heart. So that definitely fits. He also has his Best Picture winner different from either of those two wins: he has The Fabelmans as the favorite to win Best Picture. That also matches what we have in our charts from 2009 onward.

In general, what drives a Best Actor win is often the actor himself. It can be a celebration of his greatness overall (like, say, Daniel Day-Lewis), or it can be a win for a bravura performance crowning a diverse career in acting (Gary Oldman, for instance). Often, a Best Actor contender will be an actor who transforms himself completely. The level of difficulty, more so than the likability, often drives the win. For Best Actress that flips: likability often trumps level of difficulty. It is what it is.

Of the three, Banshees has the strongest Best Picture heat at the moment and will likely hit all of the major categories. That COULD give Farrell a leg up UNLESS Banshees of Inersherin becomes a Best Picture frontrunner. In that case, Farrell is less likely to win the top prize.

The Whale is getting mixed reviews. But Fraser is not. He seems to be receiving one standing ovation after another (being brought to tears every time) and is enjoying a career comeback. This is often the kind of story Oscar voters can’t resist. There is nothing like the feeling of having done a good deed with your vote. If you are standing up and he is tearing up — well, that will go a long way towards driving this win.

For Jeff Bridges in 2009, he really did work the circuit like no other. That win was not driven by his performance as Bad Blake. It was driven by his performance in The Big Lebowski more than anything because there is no separating the actor from that one role. He is so beloved, however, that every time he showed up at an event it was a good time. People loved seeing him around. They weren’t thinking about his performance when they checked the box. They were thinking about him. And so it might go with Brendan Fraser, even if the movie doesn’t become a favorite among voters.

Austin Butler would not have an “Oscar story” to go on. He would have to win purely on his performance, and perhaps love for Elvis Presley. If Elvis, say, makes it into the Musical/Comedy category at the Globes (it won’t get in with Drama probably) then that helps build momentum. Still, if Fraser is the emotional winner, then it might be slightly harder to make the case for Butler.

Farrell, of course, has a more than decent chance because of just how likable he is and how likable his character is. Overall goodwill could drive a win. The cast in Banshees is so good all around it might even win the SAG ensemble award, as Three Billboards did. Martin McDonagh has the one-two punch of great writing and working with actors really really well.

Beyond those three, what are some other actors in the mix potentially?

Those are the strongest to my mind right now. That might change, obviously.

Meanwhile, the supporting win isn’t necessarily driven by the strength of the actor’s personal story, though sometimes it is (George Clooney in Syriana).

Sometimes Best Actor and Supporting Actor can come from the same movie, like Matthew McConaughey and Jared Leto in Dallas Buyers Club, which was also nominated for Best Picture.

Much of the time, the Supporting Actor starts winning and doesn’t stop. It does go with the Best Picture slightly more than Best Actor. But it’s very unlikely all three will win.

So here are his ten Best Picture contenders (From September)

1. The Fabelmans (Universal Pictures)
2. Women Talking (UAR/Orion)
3. Everything Everywhere All at Once (A24)
4. Babylon (Paramount Pictures)
5. The Banshees of Inisherin (Searchlight Pictures)
6. Bardo, False Chronicle of a Handful of Truths (Netflix)
7. TÁR (Focus Features)
8. Triangle of Sadness (NEON)
9. The Whale (A24)
10. Glass Onion: A Knives Out Mystery (Netflix)

I like all of Erik’s picks except Ben Whishaw for Women Talking. I suppose it’s possible, but I don’t think he will bump Judd Hirsch for The Fabelmans, even though that is almost a cameo. It’s still a great performance and more likable — star and role.

Just once in the era of the preferential ballot has the Best Actress winner matched with Best Supporting Actor (Three Billboards). It looks like Erik has both Michelle Yeoh and Ke Huy Quan winning for Everything, Everywhere All At Once. I suppose that could happen if both of the supporting actors from Banshees cancel each other out. Otherwise, they’re likely to win, either Brendan Gleeson or Barry Keoghan.

I also like Paul Dano for this win. It’s an understated work by him but it is probably my favorite performance of his to date.

With all of that said, here are my current predictions.

Best Picture
The Fabelmans
The Banshees of Inisherin
Everything Everywhere All At Once
Babylon
TÁR
Women Talking
Avatar: The Way of Water
She Said
Top Gun: Maverick
Glass Onion

Alt: Elvis, The Son, The Whale, Emancipation, Empire of Light, The Woman King

Original Screenplay
The Banshees of Inisherin
Everything Everywhere All At Once
The Fabelmans
TÁR
Babylon
Alt: Empire of Light, Elvis

Cinematography
Everything Everywhere All At Once
Babylon
Bardo
Avatar: The Way of Water
The Banshees of Inisherin
Alt: The Fabelmans, All Quiet on the Western Front, Empire of Light

Production Design
Everything Everywhere All At Once
Elvis
The Fabelmans
Babylon
Bardo
Alt: Avatar: The Way of Water

That’s it, for now. All to be taken with a grain of salt.

And now, the charts — thanks to Marshall for helping me with them. 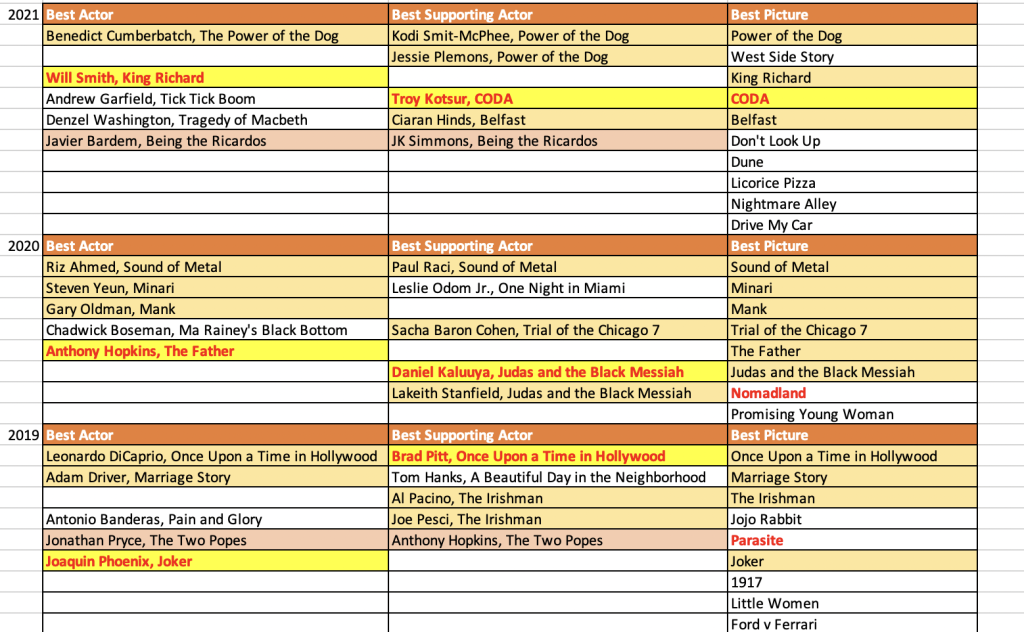 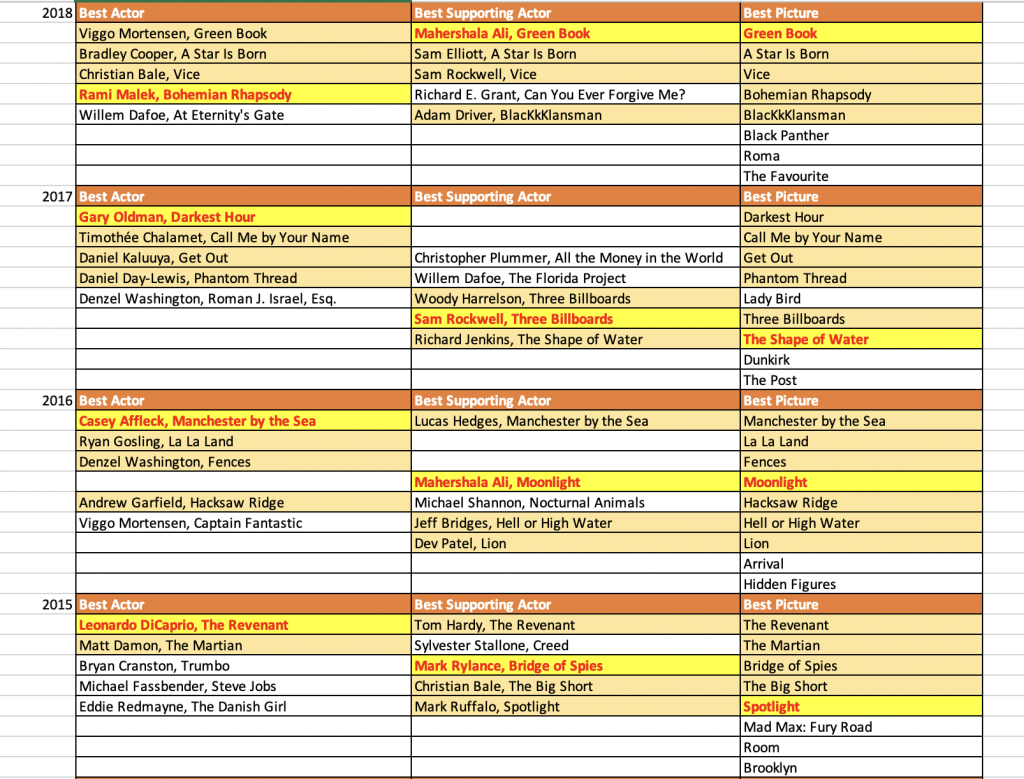 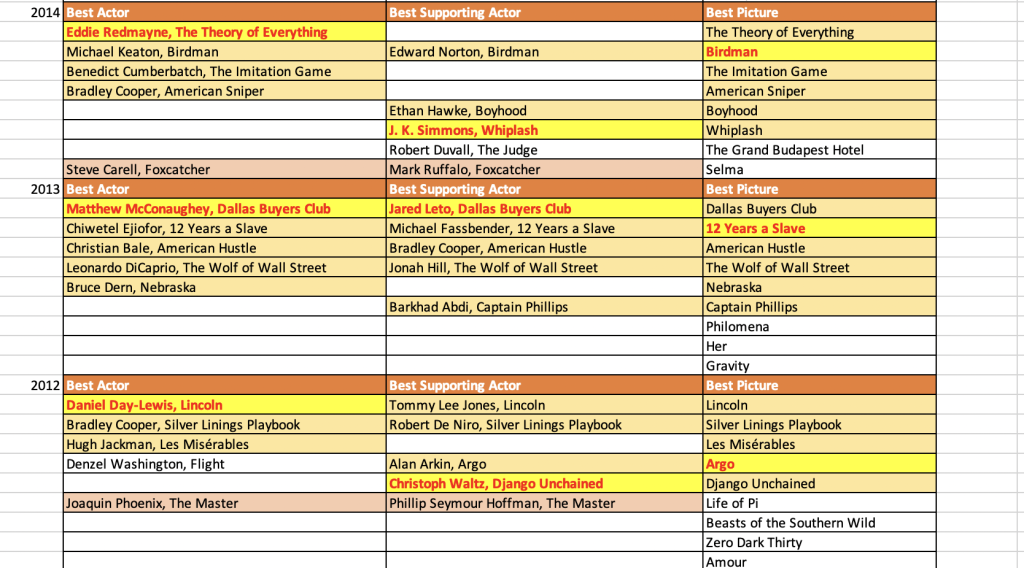 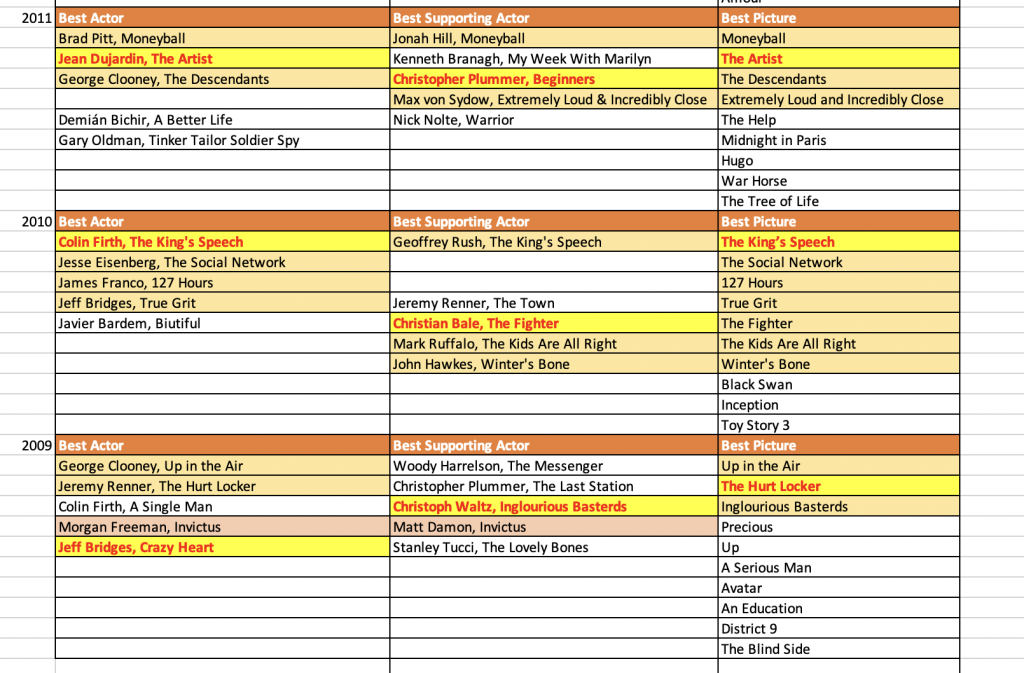