I haven’t been able to shake P.J. Palmer’s North Star since I watched it last July. There is something about Colman Domingo holding back his pain but allowing his heart to flourish that resonates in a time when queer people are fearful of upcoming elections and loud, political fervor. Rather than focus on our differences, North Star is a film about how much we ultimately share, as we hunt for a love that cradles us and champions what we all have in common.  It is an excellent film that deserves to be in the hunt for Live Action Short Film.

North Star centers on Domingo’s James, a rancher not only in charge of looking after the land but also caring for his dying partner, Craig (played by Malcolm Gets). Craig’s sister, Erin, is able to help as much as she can, but she doesn’t approve of her brother’s marriage or how he is being cared for. James and Erin disagree, but James never fights loudly with his devout sister-in-law. He is a man that understands that yelling and screaming wouldn’t be productive.

Before we jumped into out conversation of the film, Palmer revealed that Michael Haneke’s Amour was an inspiration. “It was a touchstone for me to tap into that. I am not that age, and I’m not sick. That film was something I went back to often,” he said.

Gay men, to many, aren’t supposed to be cowboys. There is something rugged and masculine about that idealized picture that, seemingly, excludes gay men automatically to some. Domingo, with his quiet strength and handsome jaw, inhabits the role beautifully, and you cannot help but wonder if Palmer meant to covertly break through that Old West mythology. Seeing Domingo in the early morning light don that hat is exciting.

“Whether it’s the Old West or the Great American West, it’s rooted in a lot of specific American mythology,” Palmer explains. “It’s lovely, and it’s a very American thing. We don’t see that represented in film the way that North Star represents it, and that mythology, in all honesty, people buy into it. People know cowboys. There’s a lot of loud dog whistles about what a person is or isn’t. In the 2008 election, when Sarah Palin was running with John McCain, she kept bringing up “real America” in the rural areas like Ohio and Alaska and California. It was this loudness directed at white, Evangelical straight people, and I got mad about that because I am from there. That’s where I grew up. Real America is what I put in this film, so it was very intentional. Film hasn’t shown it. The main characters of a film, TV show, a book, or even a podcast are avatars for the audience. They have to put themselves in a person’s shoes to connect to a story, and we rarely see the characters of North Star as the avatars for everyone. That’s what I wanted. Why can’t a gay, Black man be the character people connect with?” 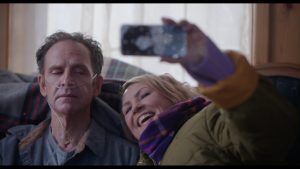 As James gets ready for just another day of tending to the land, he pauses for a moment and takes a deep breath. His body sighs but then he’s pumped back up, because he knows what he has to do in order to reach the end of the day. This kind of work enters your entire body from head to toe. On top of that, James comes home at night and tends to Craig’s physical needs. They cannot afford to hire a nurse, but James wouldn’t have it any other way. We see that intimacy, that closeness. Spending time with his husband is a way to release the physical weariness.

“That moment, that sigh, is in the first shot of him,” he said. “He’s silhouetted by the light, and he takes that deep breath. Colman did that. You can’t see it because it is such a dark scene, but he’s praying. It helps him get him through another day. For the rest of the film, there were moments where we discussed how much James is internalizing, especially in his arguments with Erin. In the language of the script, he could’ve played it as a fight and gotten into her face, but we pulled that back. We made him more Christ-like in the sense that he is going to turn the other cheek and let this woman rage at him. He knows the bigger picture, and he knows that she is pain. It’s not just about him and Craig–it’s about her. He allows her to have that ugliness because she doesn’t have the tools to calm down and understand there are other ways to deal with it. There is so much on his shoulders. A lot of the other stuff was in the script, and I think Colman understood where he was coming from. There are entire sequences that we shot of James taking care of Craig or carrying him down the stairs that didn’t make it in. There were more scenes of James going through the routine of caring for someone who can’t help himself, and I think that’s what you see in the final edit.”

When Erin enters James and Craig’s home, she swirls around like a whirlwind. I admitted to Palmer that religious people automatically make me throw a wall up, and that I felt that same feeling when Erin begins easily offering scripture to those who within earshot. When she addresses her brother’s husband, she doesn’t call him James (like everyone else does), but she changes it to Jimmy. Writing a character like Erin is surprisingly difficult, Palmer reveals, because of how many traps there are to fall in. Instead of worrying about that, he leaned into it while writing his screenplay, and he gave meaning behind it.

“It’s hard, because some people–not all people–live that life,” Palmer said. “That’s sort of the whole point. There is a safety in it, I think, because putting your sand is easier for some. She says some very clichéd things like, ‘Love the sinner, hate the sin’ or ‘God works in mysterious ways’ and they come out as bumper stickers, and I know folks who will live in those statements. It was tricky to do that, because it does run the risk of being played as inauthentic. One of the things that I did in the writing was her calling James Jimmy. I liked that she had this closeness that wasn’t real. Erin comes in like hurricane and takes over. She does not ask permission, because she is in her right. James lets her do it, because, partially, he knows she needs this. I don’t think I’ve ever revealed this, but anytime she refers to her and her husband, she starts with, ‘me.’ She puts herself first in every statement whereas the character of James never says the word, ‘I.’ I didn’t let him say it, because he never puts himself first. That was some of the ways to make her very real. She’s a very different character to the extent that her grammar is different.”

Palmer doesn’t cast Erin as a villain as much as he introduces her different viewpoint. In Erin’s mind, however, she is the lead of her brother’s story. She believes she is the one who is there to save him–not James. I imagine her angrily or tearfully calling her husband on her drives home and saying, “I know what’s best.”

“In Erin’s mind, she is the hero. That’s how Audrey played it, and that’s so important to the story. Erin is the savior, and James it the enemy. Audrey embodied entitlement, and I think it’s interesting that she is white and she holds that entitlement over a Black man. Her barging in and knowing where everything is gives an indication of history. I love how she is colored. We gave her these bright colors that is the opposite of the serenity that these men have.”

A choice is made towards the end of North Star that changes the course of everyone’s life, and Palmer closes the film with a shot of Gets’ Craig. He is stuck in that house all day and sees his husband doing work on the land and tending to the horses. He is helpless but he is not a hopeless character.

“In a lot of ways, he hasn’t had a full moment to himself,” Palmer explains. “Throughout the film, he is reacting and reacting. We needed to be inside his heart, and that was the moment to do it. At the end of the day, all the decisions made affect him the most. Everything Erin does and everything that James does. He’s sick, but he’s not lost. I also think that Malcolm brings it home in such a devastating way. If you haven’t cried during the movie, you will in that last shot. For people who are in that character’s position, that’s a heavy burden to carry. Craig isn’t the kind of person who wants to be fussed over, and there must be guilt. What is James is going to do when he is gone?”

With all the overt anger towards queer people merely existing, I wondered if Palmer experienced any pushback towards his film. There are politicians and people online who assume that gay men are trying to indoctrinate or harm children, and don’t dare utter the words ‘drag queen’ in a PTA meeting. In a lot of ways, queer filmmaking and art is an act of defiance just by creating it, but Palmer wanted to make a film about enduring love.

“No one has said that to me, but I do have people in my life who are very close to me who refuse to acknowledge that it exists. There are people in my life that won’t speak to me, because I made it. And they haven’t seen it. For those people, I know it’s their choice, and I have been told they can’t watch it for their Christian convictions. Convictions is another word for choice. You’re a grown person. If you don’t want to watch it, then don’t. If you do watch it, and you do have a problem with it, good. There is either, you love it or you hate it or you’re indifferent. Indifference is the worst. That means I wasn’t able to reach them emotionally in any way. What I have found, for the people that I was afraid of their reaction, is that their reactions were remarkably different than I thought. I had someone apologize for the gay reparative therapy they have done in their ministries. It wasn’t just because of seeing the film–they were already on that road and seeing the film brought it home for them. Let people love how they love. You don’t have to be a gay cowboy.”

“I don’t consider the film a gay film. It’s about how a family needs to make sacrifices in order to stay together. If I had written this film and Craig was dying of AIDS, then a wall would be put up. That’s why it’s never revealed. Almost everyone has had a personal experience of someone in a similar situation or have someone be ill. People will connect with it. For few antigay marriage people that I know who have seen it, I think it opens them up a little bit. Maybe they will realize that they should just leave other people alone.”