Reframe: ‘Nashville’ Remains the Damnedest Thing I Ever Saw

by Clarence Moye
in featured, Reframe
16

Download: Reframe: ‘Nashville’ Remains the Damnedest Thing I Ever Saw

I first encountered Robert Altman’s 1975 country music epic Nashville in my mid-1990s college film class. I’d signed up for the Coppolas and the Scorseses and the Hitchcocks. I’d been exposed to the great The Rules of the Game and the film techniques of the early German expressionist cinema. I’d always loved movies on an emotional level, of course, but film classes led by a collection of excellent film professors taught me to appreciate them on an intellectual level. My mind opened to all of the brilliant subconscious effects directors employed to convey their thematic intent. 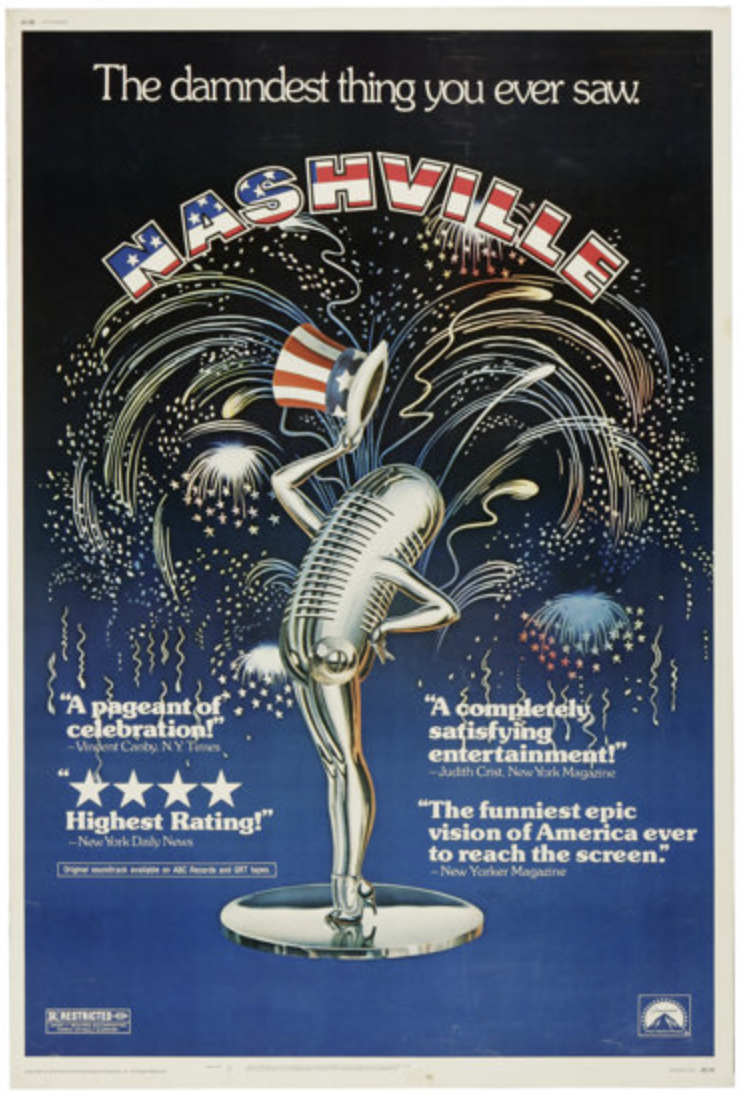 But my first reaction to Altman’s Nashville remains a memorable one — I slept through it.

I didn’t just doze off. No, I full-on passed out, folding my legs against the theater seat in front of me and shutting my mind down against the inescapable cacophony of noise with which Altman filled the film. With 1980’s Popeye my only previous exposure to Altman’s techniques, I had never seen anything like it, and as silly and perhaps pompous as it may sound, I don’t think I was quite ready for it at the time. It wasn’t until a few years later when my film professor urged me to give it a rewatch that it sunk in.

Nashville remains a thematically timeless masterpiece of cinema. One whose characters, relationships, and yes political undertones resonate still today. Perhaps now more than ever before.

There isn’t really a plot, per se, to Nashville. Altman and screenwriter Joan Tewkesbury create a meandering narrative that vaguely follows a handful of Nashville outsiders as they interact with Nashville residents and musicians: supposed BBC reporter Opal (Geraldine Chaplin), political consultant John Triplette (Michael Murphy), space cadet Martha / “LA Joan” (Shelley Duvall), and mysterious drifter Kenny Frasier (David Hayward). Each character wanders through various Nashville locations ranging from recording sessions to church gatherings to concerts to barbecues. At several points through the film, these central four sometimes serve as audience surrogates (mostly Opal in this sense), culminating in a massive political rally/concert in which one of the film’s most sympathetic characters is assassinated. But more on that later…

Robert Altman’s films make you work to enjoy them. Nashville, in particular, tends to frustrate casual viewers with its massively overlapping dialogue and, well, total lack of plot. But that’s kind of what makes it so brilliant, and it took me a while to realize it. Nashville directly puts the audience into each and every scene through Altman’s revolutionary use of sound, capturing conversations on individual audio channels and smashing them all together whether you can understand them uniquely or not. The effect? You feel
like you’re actually at a barbecue or physically present in a recording session. Gone were the artificial sound designs that focused mainly on the actor’s dialogue plus some ambient background noise (car horns, doors shutting, etc) and the orchestral score. But here, the film replicates the experience of being at a massive dinner party where everyone’s talking at once, and you audibly grab only snippets of conversation here and there. Actors needed to constantly remain in character as they had no idea when or where Altman’s camera and boom mic would follow them. Piloted in previous films but most impactful here in Nashville, that revolutionary shift in recorded dialogue may seem trivial now, but several filmmakers following Altman continue to employ it. Even Noah Baumbach’s White Noise owes a debt to Altman’s technical innovations.

To me, what sells Nashville are the fantastic characters and the actors who so brilliantly embody them. There are 24 main characters. Twenty-four distinct characters with stories and hopes and dreams and a real sense of purpose. At its core, the characters make Nashville such a wonderfully rich piece of cinema, one that we’ve seldom (if ever, honestly) seen since in American film. Lovers of the film will rightly point to Ronee Blakley’s central figure Barbara Jean as perhaps the film’s most fascinating and sympathetic persona. Very loosely based on the late Loretta Lynn, Barbara Jean spends most of the film ailing from what appears to be exhaustion from an overly aggressive touring schedule. In fact, her first appearance at an airport pep rally ends with her fainting dead away on the tarmac.

But Blakley returns in astonishingly great form midway through the film when Barbara Jean finally performs at Opryland USA. Well, she tries to anyway… I guarantee that this scene won Blakley her ludicrously well deserved Oscar nomination for Best Supporting Actress, which she shared with the very good Lily Tomlin. Standing on the back of a paddleboat surrounded by perplexed dancers and musicians, Barbara Jean attempts multiple times to launch into her standard act, but something always distracts her. A memory. An oncoming storm. A love of The Wizard of Oz. It’s a bravura, bizarre, and complex sequence that only Robert Altman and Ronee Blakley could have delivered. Blakley brilliantly handles a massive monologue of random, seemingly disparate phrases and thoughts that truly, sadly, conveys a mind nearly completely succumbing to madness.

What sells this performance even more is when you understand that Altman asked many of his actors to pen their own songs in character. These songs, ridiculed by Nashville musicians at the time, ultimately became iconic contributions to country music. Blakley wrote several, including the beautiful and haunting “My Idaho Home,” which she performs at the film’s climactic political concert for the controversial, unusual, and never-seen presidential candidate Hal Phillip Walker.

The unexpected and shocking climax of the film brings a sad end to Barbara Jean’s suffering as Altman gives us the final purpose of the eerily quiet Kenny Frasier. Staring up at Barbara Jean and the broadly waving oversized American flag above them, Frasier shoots Barbara Jean, splitting crimson red blood against her virginal, angelic white dress. While we’re never certain of Barbara Jean’s fate, it’s assumed she dies. We have no idea whether or not Frasier came to Nashville to kill her or Hal Phillip Walker or any of the other 24 main characters attending the concert. We certainly know what Altman thinks of politicians as Walker’s idiotic platform includes the abolition of the national anthem because “nobody knows the words.” But in the film’s closing moment with Barbara Jean lovingly belting out her intensely personal ode to simpler times “My Idaho Home,” Frasier’s stony visage becomes increasingly menacing before eventually pulling the trigger, completely uncontested. Whether or not the bullet was intended for her, we’ll never know. The aftermath, though, speaks volumes.

This bloody and brutal intersection of the political and entertainment worlds came five years before the assassination of John Lennon, but it undoubtedly forecasts a modern world in which entertainers become hunted objects of obsession. Rebecca Schaffer. Gianni Versace. Selena. The list goes on and on, and Nashville laid it all out for us back in 1975, a year before Travis Bickle appeared in Scorsese’s Taxi Driver. Did Altman know this would become our future? Unlikely, although he was smart enough as a director to stage it in such a realistic way that he must have known it wasn’t out of the realm of possibility. Here, the unchecked political ambitions of a man that we never even see put the most innocent and sympathetic character in Altman’s political opus in mortal danger. It’s as stunning and unexpected as anything I’ve seen in films since.

What makes it even more brilliant and, honestly, totally fucked up is what happens next.

Throughout the film, we’d occasionally followed a drifter, a woman (Barbara Harris) with ripped stockings who appears as unbalanced as we discover Barbara Jean to be. Yet, as medics carry Barbara Jean’s body off-stage, she finds either through cold ambition or natural instincts (perhaps both) the presence of mind to grab a microphone and distract the terrified audience from what they’ve just seen. She begins to sing the Keith Carradine-penned “It Don’t Worry Me,” leading other singers and audience members to close the film with the now-corrupted tune.

Here’s a sample of the lyrics:

Economy’s depressed, not me
My spirit’s high as it can be
And you may say that I ain’t free
But it don’t worry me

Altman’s incredibly, sickly subversive instinct is to end his sprawling epic of 70s-era country music with an assassination of his world’s biggest star in front of a large crowd who is then only a few minutes later soothed into singing a song about apathy in the face of trauma. Even as I write that sentence, I’m chilled by the sentiment and the dozens of interpretations one could take from it. Don’t want to vote? It don’t worry me. Suffering from inflation? It don’t worry me. Lost the right to determine medical care for your own body? It don’t worry me.

Granted, today, those things do worry millions of people, but we all suffer (benefit?) from distractions. We all take our eyes off the target. We’re all soothed into peaceful ignorance with a film or a night out or, yes, a cheerful song. Ultimately, isn’t that what people want to do at the end of the day? We want to forget. We’re exhausted by problems. We’re drained every time “the most important election of our time” comes around. We just want to be happy, to be pacified and told that, when bad things happen, it will really be okay in the end. That’s likely untrue, but it sounds great at the time, doesn’t it? That’s what finally makes Nashville the masterpiece that it is. It has the balls to show us that people are naturally selfish, self-centered, and rarely live for the greater good.

As I sit writing this ode to Robert Altman’s film (top five for me without a doubt), I’m inundated with political ads and uncomfortable political conversations with neighbors and family members. Such is life in a battleground state. So, yes, I’ve backed away from all of it. It’s as exhausting to me as Barbara Jean’s road schedule was to her. You may say that I’m a white privileged man who has the luxury of backing away from a fight. Maybe you’re right. I just don’t have the fight in me anymore, to be honest. And so, I self-soothe like a child with things that make me happy. Like Robert Altman’s glorious Nashville. And whatever happens this week or next week, well… it’ll happen with or without me.

It don’t worry me.