2023 Oscar Predictions: All Quiet on the Best Picture Front

How to Separate Publicity from Reality

Download: 2023 Oscar Predictions: All Quiet on the Best Picture Front

For the first time in a long time, the Oscars this year have a chance to be big again, or at least bigger than before. Jimmy Kimmel is hosting, which is an optimistic move to remember the Oscar days of old, before they became more about absolving our collective sins than putting on a good show. Black Panther: Wakanda Forever will open big this weekend, aiming for a $200 mil haul. Avatar is coming. Babylon is screening. And there is still the movie of the year to most people in this country — Top Gun: Maverick.

Like everything else in America, the Oscars were paralyzed by fear and self-doubt after the summer of 2020, such that no white man has won either Best Director or Best Picture since. Imagine having a mass hysteria episode that revolved around the achievement of white men. We all lived through it. We all know why it happened. We know the history. We know what came before. The question that remains is whether we are through it or whether we’re not. If we are through it, then there won’t be a desire to vote in ways that reflect activism more than preference or taste.

Now that the midterms didn’t bring the Handmaid’s Tale dystopia (as many on the Left thought it might), there might not be as much mass panic as there might have been otherwise. But that doesn’t mean politics won’t still be infused throughout film awards — they will be. Actors dominate the Oscars, and activism dominates actors.

When thinking about Best Picture, you have to imagine how many people will choose a film as their number one of the year, and why they do that. Many will want to do something “good” with their vote rather than pick the best movie. They will still want to send a message about who they are and what they stand for.

All Quiet on the Western Front would be the “International Feature” selection that has hit the Best Picture race for a while now, with Parasite being the first winner. But it is also the kind of epic Oscar voters, in the past at least, couldn’t resist (remember that a prior adaptation of All Quiet won Best Picture 90 years ago). What I love about it is that it makes so many of our problems right now — problems that seem like the end of the world — look appropriately puny compared to that war. It’s also just dazzlingly brilliant in every frame. It’s a masterpiece. It can’t be called anything else.

Speaking of masterpieces, The Fabelmans was apparently well received at the AFI Fest, according to Anne Thompson. There was applause throughout and a warm reception at the film’s end. The Banshees of Inersherin is showing box office appeal in limited release and is, I think, among the very best films of the year. Both should have no problem dominating once we move past the film critics awards phase, which comes up in the next month.

There are some rumblings about Guillermo Del Toro’s Pinocchio making a play for a Best Picture nomination for Netflix. Variety’s Clayton Davis has a nice piece about his daughter wanting it to win Best Picture.

Anne Thompson has Pinocchio on her frontrunners list (though she declines to put down movies she hasn’t seen):

Her second tier list:
“All Quiet on the Western Front”
“Avatar: The Way of Water”
“Babylon”
“Empire of Light”
“Glass Onion: A Knives Out Mystery”
“Living”
“She Said”
“Triangle of Sadness”
“Till”

Nominations for the Spirit Awards and the Gothams come at the end of November. Then come the big guns and the start of “Phase 1”:

The critics have more influence now because there are so many of them and they cross over into Oscar punditry and voting even, as with the Critics Choice Awards. They also exist in the same bubble as Oscar voters do now, what with the economy of going to the movies mostly taken out.

The critics will likely be very supportive of TAR, which seems to be their favorite so far. In general, they tend to resist what they think are “Oscar movies.” Then again, they are also heavily and emotionally invested in what gets nominated and have been known to throw more than a fit or two when Oscar voters step out of line.

The two announcements that seem to be most in line with the ultimate Oscar lineup would be AFI and Critics Choice. AFI should be announced early, too, sometime in December. The AFI list will be a good way to see where Top Gun will land. If they name it (and they absolutely should) then we know it will be taken seriously.

Here are this week’s predictions, with charts of past years to follow:

Best Picture
The Fabelmans
The Banshees of Inisherin
Everything Everywhere All At Once
Babylon
TÁR
Women Talking
Black Panther: Wakanda Forever
Elvis
Top Gun: Maverick
All Quiet on the Western Front

Alt: Avatar: The Way of Water, Glass Onion, She Said, The Son, The Whale, Emancipation, Empire of Light, The Woman King

Original Screenplay
The Banshees of Inisherin
Everything Everywhere All At Once
The Fabelmans
TÁR
Babylon
Alt: Empire of Light, Elvis

Production Design
Everything Everywhere All At Once
Elvis
Avatar: The Way of Water
Babylon
Pinocchio
Alt: Bardo, The Fabelmans

And now, the charts: 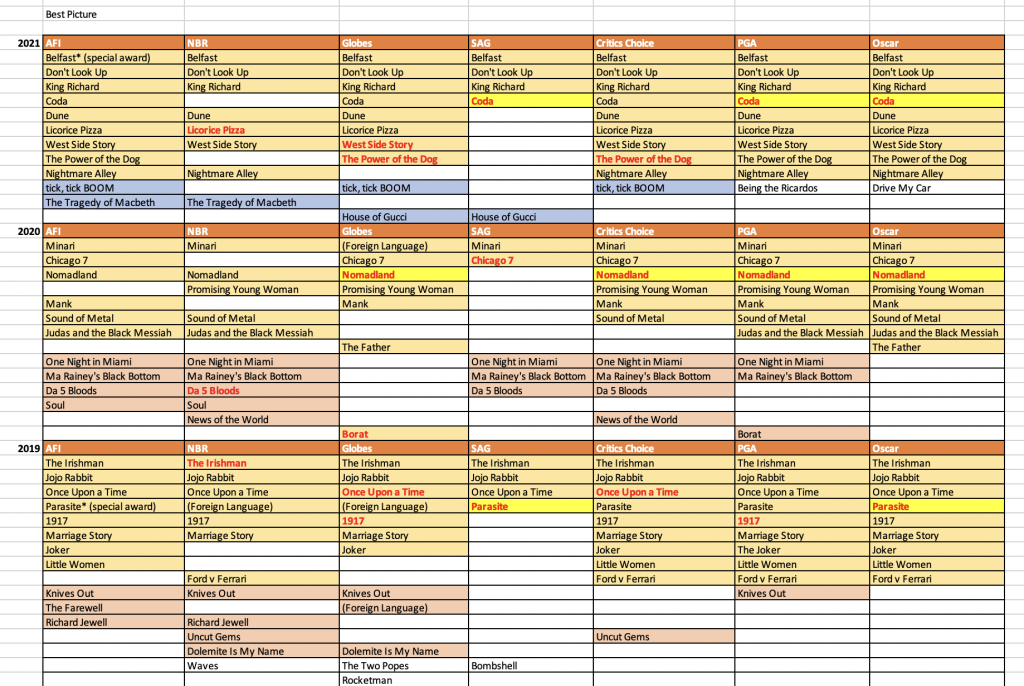 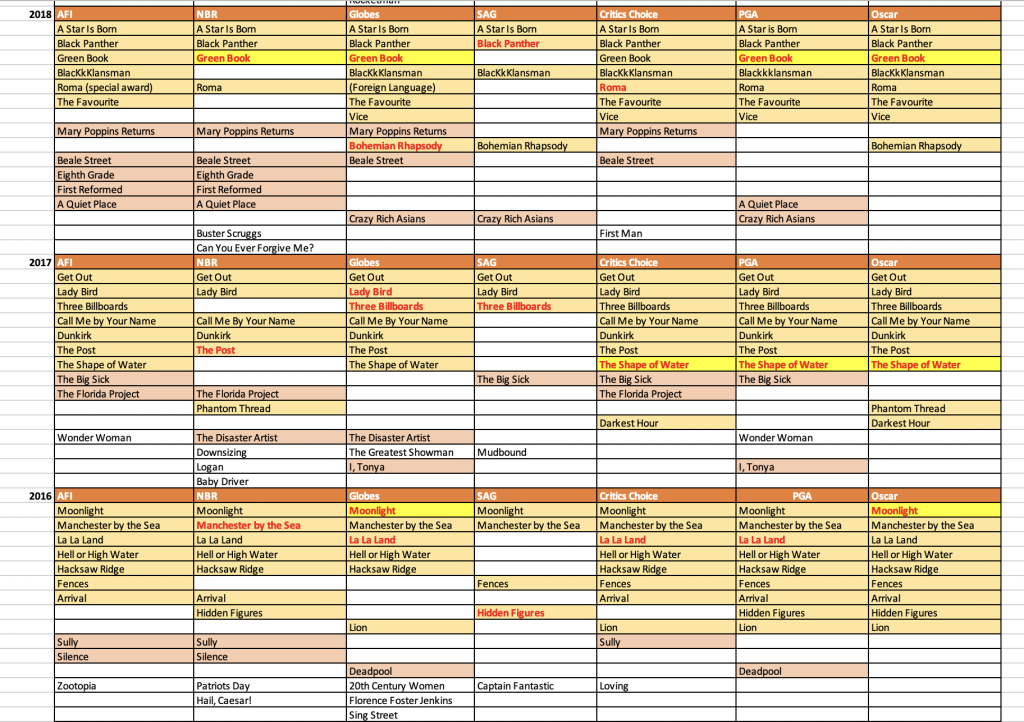 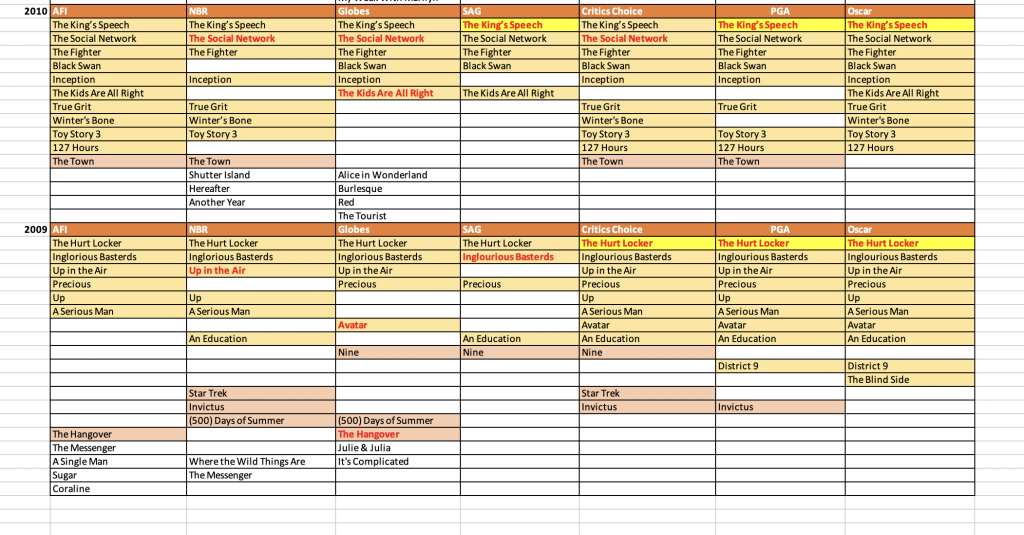