The Crown, The English debut on the Emmy Tracker while Andor makes a bit of noise.

It’s been a bit since we’ve last looked at the 2023 Emmy race. Honestly, not much has changed… until this week. HBO’s House of the Dragon stuck the landing (there are always those who will complain), but the overall sense leaving its freshman season is that the Game of Thrones ship has righted itself in a dramatically creative way. What felt like a giant question mark has solidified into a near-certain nominee, thanks a great deal to those stunning ratings (averaging around 28 million viewers per week, all platforms considered).

We also saw HBO’s second season of the Emmy-winning anthology series The White Lotus. With Jennifer Coolidge returning and introducing Aubrey Plaza, Michael Imperioli, F. Murray Abraham and more, the series remained strong in ratings, slightly improving on its first outing. However, buzz on the series seems a bit muted. That will certainly change as more of the plot unfolds, one would think. Plus, if my memory serves me, then the first season wasn’t really a week-to-week buzz sensation. People mostly found it throughout the year, and we may see the same thing happen here, particularly if the ending is as truly shocking as it seems to be headed. The guild season will tell us how people are receiving it, but it’s difficult imagining the Television Academy broadly embracing all actors as tightly as they did with Season 1. That’s not a slam on their performances. Instead, Season 1 tended to have bigger, Emmy-friendly names. Aubrey Plaza feels like an immediate stand-out with F. Murray Abraham’s Oscar-winning cache and Michael Imperioli’s Sopranos legacy putting them into a better slot for Outstanding Supporting Actor.

Now, the big question there remains where exactly HBO will be forced to compete the series. Several Emmy watchers have grumbled that Coolidge’s return should see the series enter the Drama Series race. My gut tells me HBO will fight that as much as they can given their already full Drama Series load of House of the Dragon and 2023’s Succession and The Last of Us. We’re thinking Westworld is totally out of major races given the fact that HBO cancelled it this year following those low, low ratings.

That brings us to the newest entry in the Drama Series race: Netflix’s The Crown.

Hot off the Emmy-dominating Season 4, The Crown‘s fifth season brings in the third and final cast change. Emmy history tells us that actors rarely win for their first turn on The Crown with the Television Academy (perhaps subconsciously) opting to reward them for their second seasons. So, we probably won’t see Imelda Staunton, Jonathan Pryce, Dominic West, or Leslie Manville taking home any gold at the 2023 Emmy ceremony. Instead, Elizabeth Debicki presumably stands the best shot at Emmy glory given her high-profile role as Princess Diana. The series will not tackle Diana’s death until Season 6, so Debicki’s role in Season 5 is likely to be either her last or at least her biggest contribution to the series. That puts her in the best position to win next year in the (now updated) Supporting Actress race. 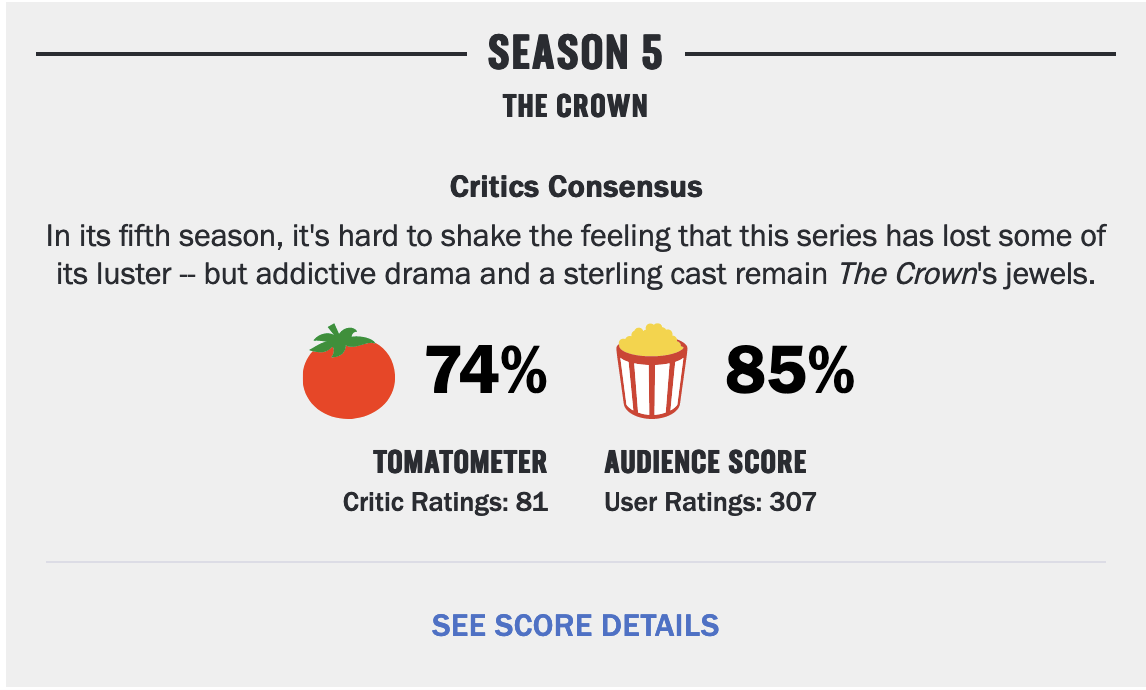 That said, audiences and critics seem to be cooling on the series, based on the latest reviews out of Rotten Tomatoes. When initial reviews dropped (largely from UK critics), the Season 5 average debuted around 50%, sending Film Twitter (TV Twitter? Is that a thing?) bros into a frenzy claiming that The Crown was dead and would be ignored by the Television Academy. Since then, the season score has increased, though it hasn’t reached the series heights of Season 4’s 95%. Honestly, that’s to be expected. Coming off of a season filled with scenes of the young Charles and Diana that we never really saw plus the incredible Gillian Anderson performance, few seasons could compare. Does that mean The Crown is dead? That the Television Academy will drop it from the final eight Drama Series. Highly unlikely. In case you haven’t realized it, the Television Academy tends to stick with their favorites. It will still rate highly with nominations, if not nearly as high with wins.

Also debuting this week, the Emily Blunt-led limited series The English mildly impressed critics with a 78% RT average. Audiences, though, are a bit cooler on the series with a 67%. The Golden Globes may recognize Blunt, but it’s unlikely that extends all the way to the Emmy eligibility window. That is, unless the series really catches on with the viewing public, which seems unlikely. This tends to happen with Amazon Prime series that aren’t The Boys or The Marvelous Mrs. Maisel. I’m still trying to figure out how they managed to take the brilliant Barry Jenkins-led The Underground Railroad and fail to make any kind of significant impression with the Academy. So, for now, The English isn’t high on my list of contenders.

Finally, Disney+’s Andor wrapped its first season this week, and fans raved about the series. Those who love it REALLY love it, so the passion may lead to a Drama Series nomination. I suspect there’s probably only one slot saved for a Star Wars Disney+ product, and that’s likely to be Season 3 of The Mandalorian (because remember the Television Academy likes its favorites). Maybe there’s room for two, certainly the politics-heavy Andor gives members of the Academy more to chew on that Baby Yoda. It definitely remains in the conversation, and I suspect it will be heavily appreciated during the guild season. For myself, I still need to catch up on it. The first three episodes bored me to tears, but I will revisit it for sure. Enough people have raved about it to give me reason to return.

Next stop for Emmy watchers remains the Golden Globe nominations which come in roughly one month. Until then, keep watching the Emmy Tracker for regular Friday updates as Yellowstone, Wednesday, and Dead To Me premiere over the next few weeks.

Women Talking's Sheila McCarthy Talks Ruth and Cheryl, Answers One of the Most Frequently Asked Questions about the Film