Between the announcement of Taylor Swift’s All Too Well: The Short Film being confirmed as an eligible entry in this year’s Live Action Short category and the Toronto International Film Festival featuring a sit-down interview with the artist as part of their Conversations With… series, I could only think to myself one thing: “Swift is going for that Live Action Short Film Oscar.”

There is now some distance from the 35mm premiere of All Too Well and the conversation with TIFF CEO Cameron Bailey, but I have thought about that interview in detail for weeks. Perhaps it’s because Swift’s tenth album, Midnights, dropped almost a month ago and we are still talking about it. Or perhaps it’s because Swift is part of our collective consciousness–it doesn’t matter if we are talking about music specifically or just picking up groceries. Someone will bring up Taylor Swift or you will hear a bit of a song playing…somewhere.

The Academy has been trying to “figure out” how to get more eyes on the live telecast than ever in the last few years, so why not invite Swift to the party? Last year, Awards Daily founder and editor, Sasha Stone, wondered if nominating Spider-Man: No Way Home could garner some buzz with younger viewers, but if enough voters fall in love with All Too Well, could some Swifties fall in love with the history of the Oscars, too?

For those who haven’t seen Swift’s short, it follows a young couple as their romance matures and a wedge is driven between them. Dylan O’Brien and Sadie Sink (who was also in attendance for this film and the presentation of Darren Aronofsky’s The Whale) throw themselves into the roles of Him and Her, respectively. It is a short about moving on, maturing, and realizing your worth over time.

At the top of Bailey’s interview with Swift, he asked her how much of her songwriting process was visual. She admitted that seeing the short presented in 35mm on the big screen was a different experience from seeing a digital presentation, and, I have to say, it’s absolutely stunning. If you are a fan of Fall, All Too Well‘s visuals will make you wistful before the relationship drama shakes down.

“It was always part of the process, because when I write a song, I would immediately start thinking of how I want to present this on stage,” Swift told Bailey. “If I made a music video, what would it look like? When I create an album–partially through or halfway through–I would start conceptualizing what this album to looked like. What are the colors we’re dealing with and the themes and aesthetics? What do I want this to symbolize? From a very early point in my career, I wanted to establish each album as its own era of sorts.” 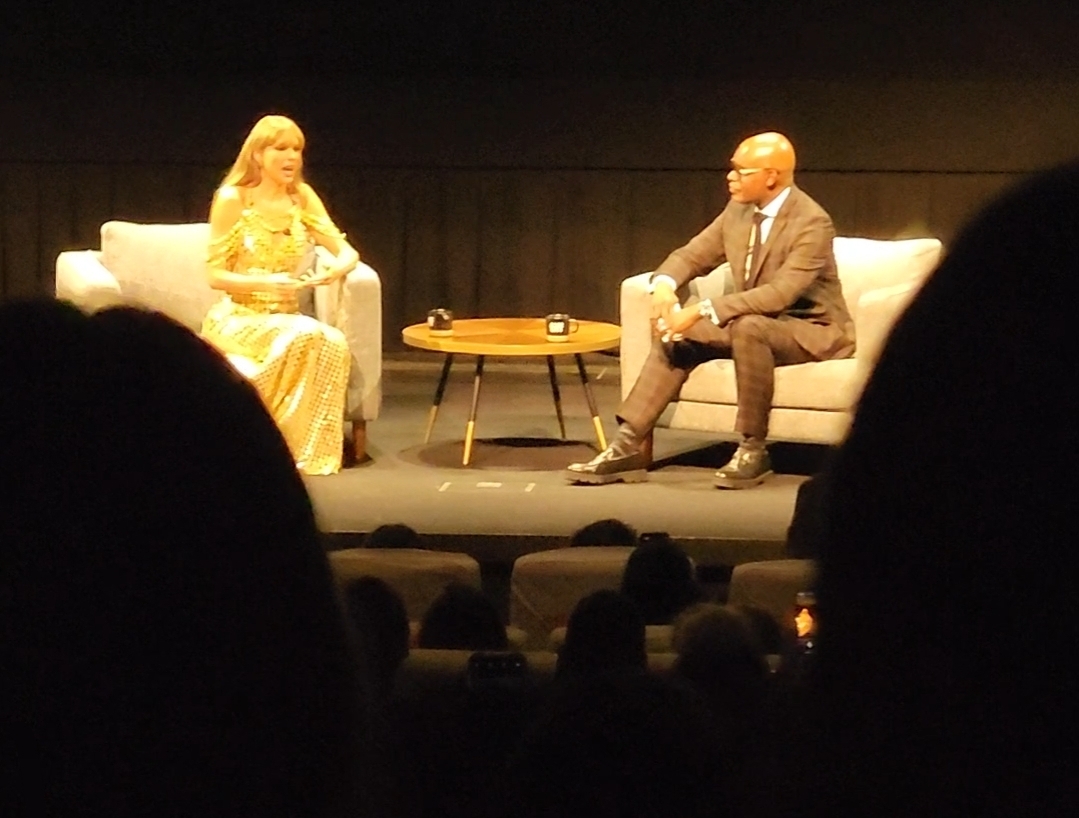 When Bailey asked Swift what films she loved growing up or what has stayed with her, she answers the question very easily. Later in the conversation, she talked about loving the work of Noah Baumbach and specifically the heartbreak in Joanna Hogg’s The Souvenir and The Souvenir Part II. She connects with longing and formative experiences, and Swift eagerly wants to transfer those feelings into her cinematic efforts.

“It’s fluctuated over time. I’ve always really loved certain films during certain phases I was in musically. I made an album called 1989 and I would watch John Hughes movies, and I would watch Sixteen Candles or The Breakfast Club over and over. This would happen throughout my career.”

“In the pandemic, I remember watching two Guillermo del Toro movies–The Devil’s Backbone and Pan’s Labyrinth. My whole world turned into folk tales and forests and mythical creatures. I was just so dazzled by those films. Then I watched Rear Window which I hadn’t seen at that point, and it was very voyeuristic. I did experience combining some of those cinematic inspirations and films that I loved, so you end up with an album that is me telling stories from other people’s perspectives in a very folk tale kind of way.”

Throughout the entire conversation with Bailey (linked below), there was a palpable buzz in the air. This was easily the most excited an audience was at a talkback that I attended at TIFF, and I imagine that this film is on more people’s radar than we expect–surely, there are some Swifties in the Academy.

Could Taylor Swift being nominated (oh, heck, even shortlisted) drive more buzz to the ceremony? Perhaps. All Too Well is clearly not Swift’s only foray into the realm of filmmaking, because she is excited about the process and collaboration. She has a thirst for learning that a lot of people can latch onto. When Bailey took the stage, he looked out onto the crowd and slyly said, “I think I know why you’re here.” Taylor delivers, and they will come.

Catching Up with ‘Inisherin’