To quote Michael Palin in A Fish Called Wanda, “There’s something funny going on here.” Two of the predictions champs over at Gold Derby, Joyce Eng and Anne Thompson, have Top Gun: Maverick at #3 for Best Picture. Three!

Joyce predicts without having seen everything. Anne only predicts what she’s already seen. Joyce is very bullish on Everything Everywhere, Anne not so much. Both have The Fabelmans at the top and Top Gun at #3, but their second choice is different.

Now, just for the fun of it, let’s look at their Best Director picks: 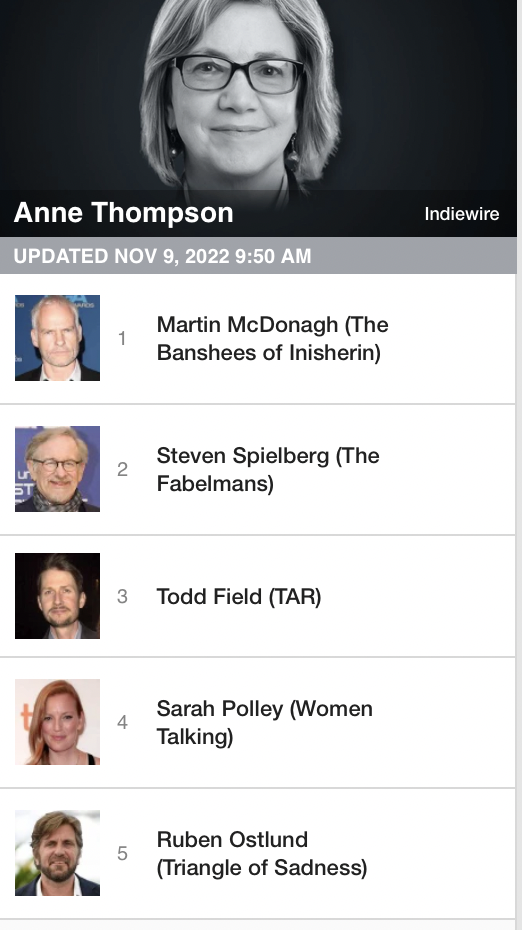 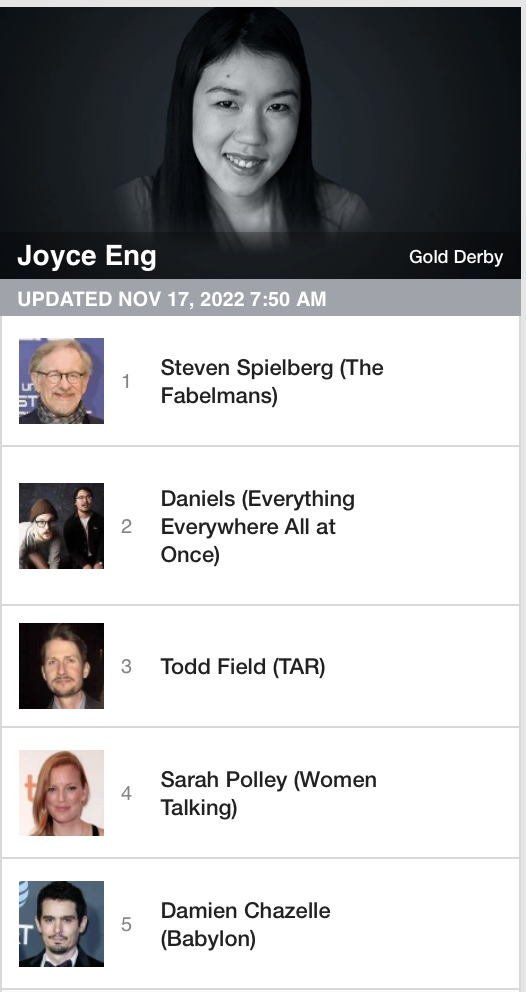 Let’s see if we can get some clarity somewhere else.

Erik Anderson over at AwardsWatch has his very late October predictions up:

1. Steven Spielberg – The Fabelmans
2. Sarah Polley – Women Talking
3. Martin McDonagh – The Banshees of Inisherin
4. Ruben Östlund – Triangle of Sadness
5. Daniel Kwan and Daniel Scheinert – Everything Everywhere All at Once

Here are Jazz Tangcay and Clayton Davis from Variety: 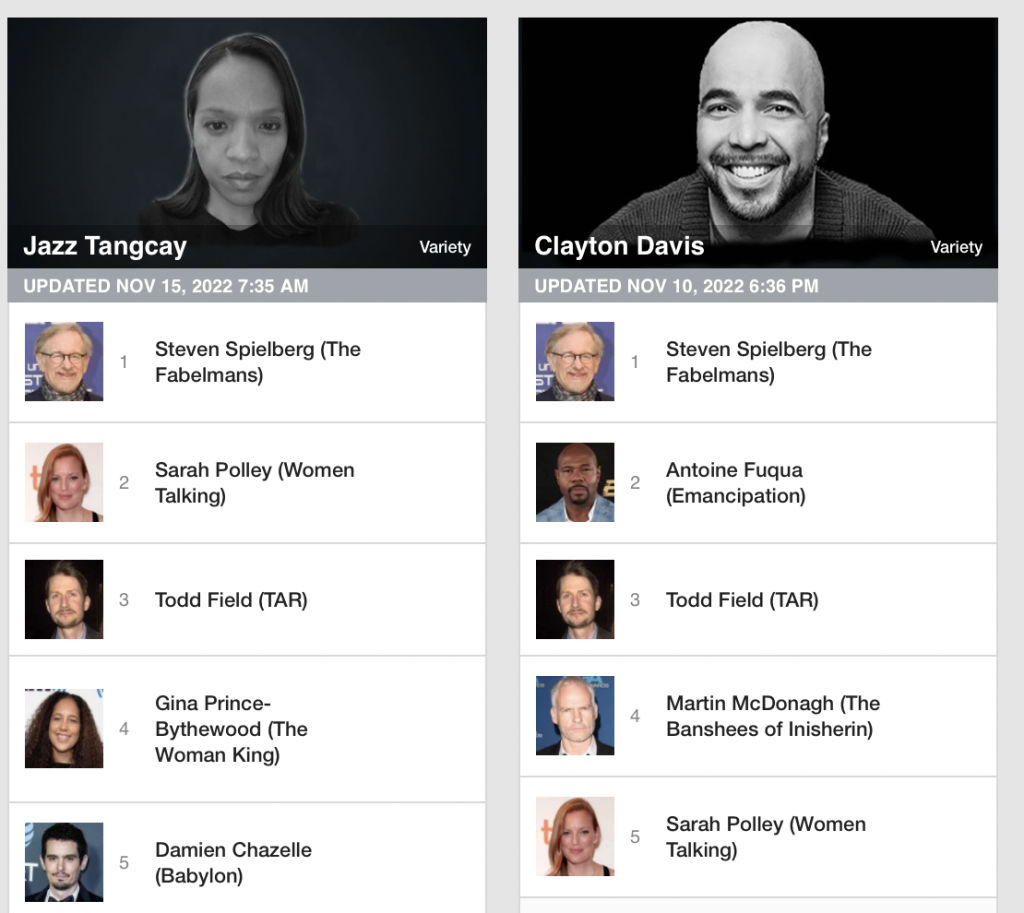 Both are coming in hot with two out of the box predictions: Clayton has Emancipation and Jazz has The Woman King!

Okay, so let’s look back a year ago and see how close we were with our Best Director predictions. Without even looking I know that I did not jump on the Drive My Car train. I never did, even though everyone else was. So take that with a grain of salt. Joyce, however, our champ, did have it in for Picture and Director very early, I think.

Now, prepare yourselves for something very embarrassing — here are my predictions around this time last year:

So, you know, it was a mess last year too. We just don’t know until we know.

We can’t put the full year into context until we’ve seen everything. But I will say there are movies flying under the radar that, I think, are worth recognition. They aren’t showing up on pundits’ lists, but in time will be remembered as the year’s best.

The Oscar race doesn’t always reflect the best of the year. It just reflects what people are paying the most attention to, what publicists are pushing the hardest, and what audiences fall in love with for a season. Once the passion and buzz dies down, time sorts out the rest.

Two films that aren’t being featured much in the race right now:

BJ Novak’s Vengeance for Original Screenplay. Obviously, this year’s category is already packed because almost every frontrunner for Best Picture is an original screenplay. Not many of them are as well-written as Vengeance, though. That’s because they were written to facilitate the director’s movie and not necessarily as scripts that stand independently (with obviously a few notable exceptions). Vengeance is about us right now, the divide between the two Americas — our perceptions and our misconceptions. It exists in macro, not micro. It’s a neo-Western in its own way, funny and surprising throughout.

All Quiet on the Western Front. It seems a little strange that this film is not riding high across all predictions, given its epic scope, dazzling cinematography, and darkly depressing but moving story. Yet, for whatever reason, no one is looking its way. We know war is hell, and we all saw 1917 not that long ago. All Quiet on the Western Front is the setup for what’s about to happen in Germany and worldwide when the Second World War breaks out. Some say that they weren’t two wars but rather, one long war. Understanding WWII requires understanding WWI, especially where Germany and Hitler are concerned.

Whether these two films will find their way into the Best Picture race is unknown. But we can say that there is a reason Top Gun is rising. A lot of reasons, actually, and only one of those is due to its spectacular box office. Does Black Panther: Wakanda Forever have the chance to also get in? According to Anne Thompson, yes. According to Joyce Eng, no. We might see an unprecedented lineup of crowd-pleasing blockbusters if both get in.

Then there is Avatar: The Way of Water. The studio is already sending out their activist pitch for the film, to bring awareness to our oceans and our environment. It’s also Gen-Z’s number one most anticipated movie this year.

Today, in celebration of the theatrical release of the 20th Century Studios film Avatar: The Way of Water on December 16, 2022, Disney and Avatar are launching a global “Keep Our Oceans Amazing” campaign to raise awareness of the challenges facing oceans and marine life. The campaign will support The Nature Conservancy (TNC) and its work to protect 10 of our oceans’ amazing animals and their habitats, connected to the beauty of Pandora. As part of the campaign, fans are invited to participate in celebratory experiences and products.

One of the experiences, called the Virtual Pandoran Ocean, transports fans to the wonders of the reef. Through this unique digital activation, fans can help Disney and Avatar “Keep Our Oceans Amazing” now through December 31, 2022, by creating their very own Avatar-inspired ocean creature at Avatar.com/KeepOurOceansAmazing. For every creature created in the Virtual Pandoran Ocean, Disney will give $5 to TNC, up to $1 million, to help the organization achieve its goal of protecting 10% of the ocean by 2030.

By the time Avatar hits theaters, we will have turned the page on a bunch of the movies we’ve seen thus far this year. I think Top Gun is surviving not just because it’s the movie that saved Hollywood and might save the Oscars, but because I think the film itself is such a crowdpleaser, and so winning, it can’t be called anything other than one of the best films of the year. I mean: 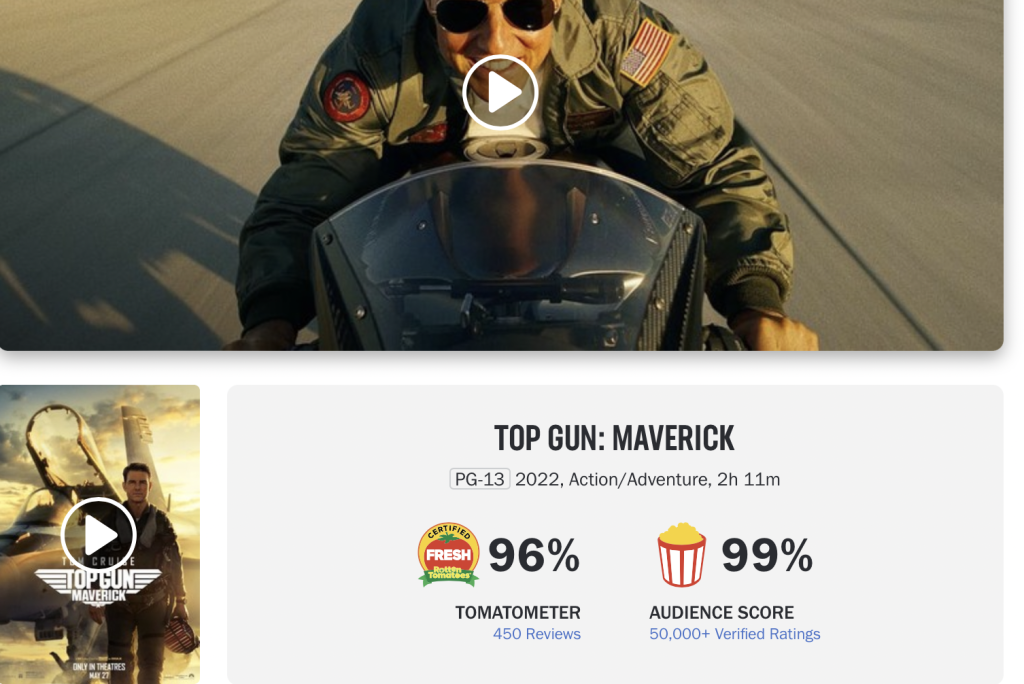 I watch Top Gun: Maverick if I want to lift my mood instantly. It’s hard to explain why it works, but it just does. It’s well-directed, acted, written, and edited. It is a classic American movie up one side and down the other. It pays homage to the past and keeps us all rooting for the good guys. Best of all, it isn’t a ham-handed “do better” lesson of the kind that is currently choking the life out of art.

Damien Chazelle’s Babylon is also a film for the ages. It’s the kind of movie that, I think, will have people talking enough so that it will wake up a generation. I can see the Zoomers hearing about this movie the same way my generation heard about Blue Velvet. You’ll want to see this crazy, vile, insane epic. The more it disturbs people, the more they’ll want to see it. At least, if I was a young person I most certainly would. That makes me think it might have some box-office strength.

It’s a movie about old Hollywood that takes you on a wild ride. But it’s how the film ends that, I think, elevates it to the level of Oscar nominations. The Best Director category seems very crowded all of a sudden. But here is what we know. We have two locks it seems:

That leaves us with three slots. Of those, these are the names that seem most likely to be there:

Sarah Polley, Women Talking
The Daniels, Everything Everywhere All At Once
Todd Field, TAR

Then it starts to get less certain:

The bottom line is this: we just have no way of knowing right now how it’s going to go. It’s still early yet. We have a whole month to go before we get the industry starting to think about voting.

Best Picture
The Fabelmans
The Banshees of Inisherin
Top Gun: Maverick
Everything Everywhere All At Once
Babylon
Till
TÁR
Women Talking
Elvis
Avatar: The Way of Water

Alt: All Quiet on the Western Front, Black Panther: Wakanda Forever, Glass Onion, She Said, The Son, The Whale, Emancipation, Empire of Light, The Woman King

Original Screenplay
The Banshees of Inisherin
Everything Everywhere All At Once
The Fabelmans
TÁR
Babylon
Alt: Vengeance, Empire of Light, Elvis

Production Design
Everything Everywhere All At Once
Elvis
Avatar: The Way of Water
Babylon
Pinocchio
Alt: Bardo, The Fabelmans