What Influenced Costume Designer J.R. Hawbaker For the Vast, Character-Driven World of ‘Amsterdam’

by Joey Moser
in Costumes, Interviews
0

There are so many gorgeous details in the costuming of David O. Russell’s Amsterdam. Whether it’s the delicate, black buckles on a short worn by Margot Robbie’s Valerie or an accent pin on the lapel of Robert De Niro’s suit jacket, everything has intention, meaning, and a story behind it. Costume designer J.R. Hawbaker reveled in fusing character and clothing for Russell’s latest film. “It’s a dream job,” she said. “Everyone is so unafraid to play and go deep with the character. What a joy to go down that rabbit hole.”

Hawbaker had her work cut out for her. Not only are there at least ten principle characters, but the film spans multiple years from 1918 to the early 1930s. At the center are Robbie, John David Washington, and Christian Bale, and Robbie’s Valerie was particularly fun for Hawbaker to design for.

“Valerie is unbelievably fun character to dress, because she is not your cookie cutter girl from the early ’30s,” Hawbaker said. “I loved figuring out where she came from and having great, early conversations with David [O. Russell] about the type of person she is. So many from the were anchored in bold women who had a modern point of view which wasn’t necessarily in line with the cultural trends of the time. We started talking about early Dada artists and their ability to think and create outside the box. There were some badass women that came before even the big names we know like Dalí or Man Ray and doing their own maverick art. There were some Hollywood types like Katharine Hepburn or Marlene Dietrich who have the same bold point of view.

When I came at dressing Valerie, it was fun to approach it from that Dada-ism, and that’s where a lot of the black came from. Dada-ism came out of World War I, and it was artists who wanted to find the frenetic joy in the chaos and horrors of war. It’s taking something dark and making something beautiful out of it, and Valerie quite literally takes bullets out of bleeding bodies. The dark black, anchoring quality is that sense of boldness and it draws your eye to the frame. It is a grounding force inside of the frame, but she can enjoy life and make art. She wears pants and things that she picked up during her travels.

Valerie wears a stunning, sleek black gown in the film’s climactic moments, and the designer imbued it with a lot of history. Valerie is the type of person who could find beauty in the most jagged of details. Andrea Riseborough’s Beatrice, for instance, would never dream of wearing something she found or something that belonged to someone else. Valerie’s wardrobe, though, reflects someone who values an item’s journey.

“The gala gown is made from Egyptian Asyut cloth which is something that we fell love with when it came to the ideals of Dada-ism,” she said. “Asyut cloth is made from these long, rectangular pieces of net and these tiny, folded pieces of metal are hand hammered into the netting to create the geometric designs. There was a little connection in how Rami Malek–who is Egyptian–plays Valerie’s brother. Asyut cloth is so cool because, in the 1700s, fisherman’s wives would take these old mosquito nets down the Nile, and they would get the discarded pot metal off of the Turkish trade routes. There were these metals that they didn’t think anyone wanted, and they would hand hammer them and cut and folded them onto these nets. It would create these beautiful, long scarves and wear them ceremoniously to festive events.” 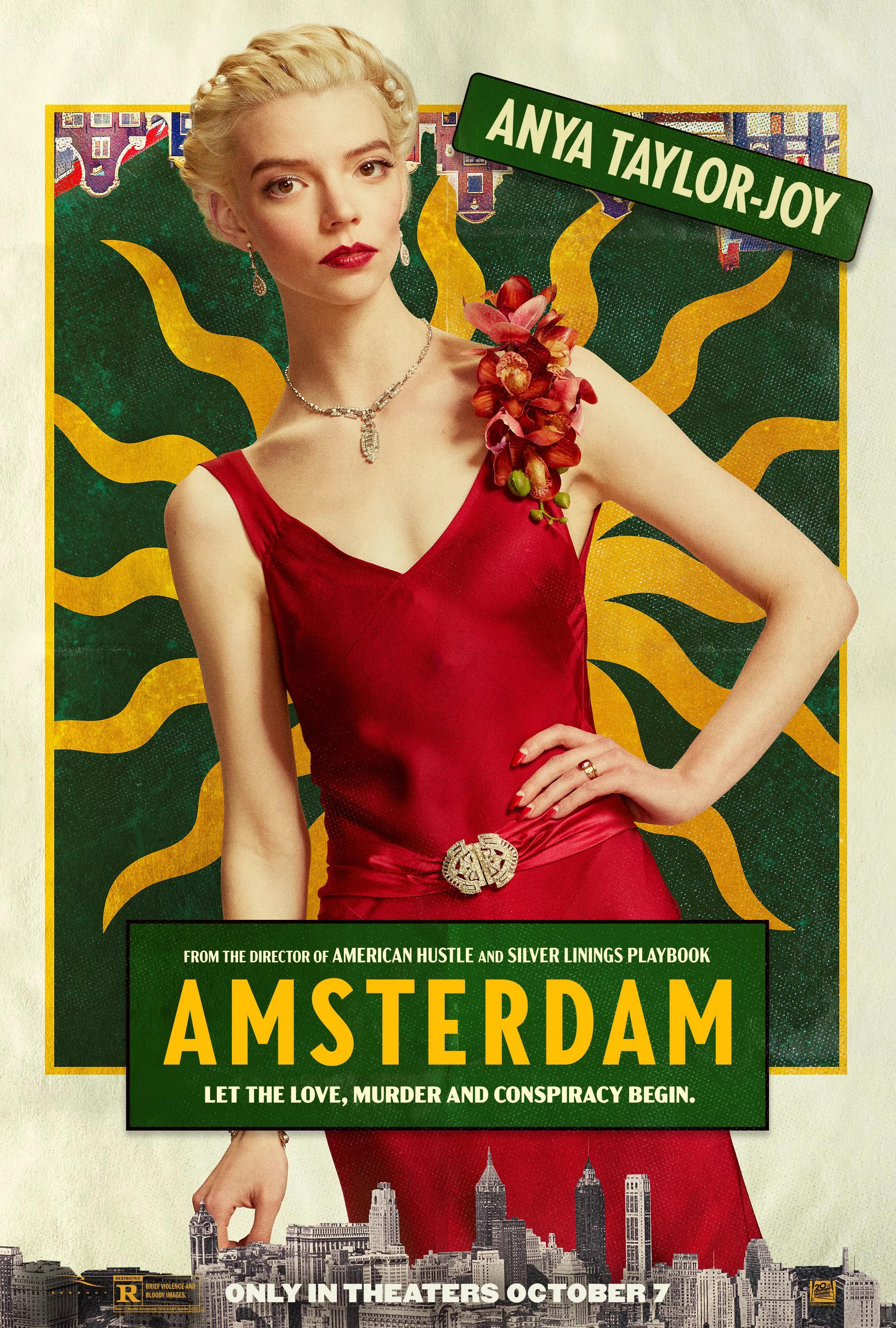 On the opposite end of the spectrum, we have Anya Taylor-Joy’s Libby, a character that I was nervous to be around. While the cut or silhouette is strong, the color will remind you of blood or a deep red wine, and that makes total sense after the film concludes. She wears this shade all throughout Amsterdam, and it made me wonder if everything in her closet shared the same hue.

“Anya’s color was definitely a coordinated, bold choice,” Hawbaker revealed. “That deep, blood, sanguine color was intentional, and the first time we see her in it is in the house. Once we discovered that look, I discovered what happened upon with that beautiful shade. It’s a stunning color, but it’s a little unsettling even though you don’t know why. Subliminally you think of blood and wine and all these visceral images. It’s also a very unapologetic color, and it was something that was used in the Nuremberg rallies a lot. That’s an Easter egg in the film. After I found that look, I knew it was a strong choice for her character, and David knew that he wanted a red dress for the gala. The combination of David’s instinct and seeing how well that color works led us to use it throughout the film. It’s beautiful but makes you raise an eyebrow, and, I think, that it works so well with the mystery of the color.”

There was a lot of floral influences in Europe at the time, so those [details on the gala dress] was very accurate. We had those flowers hand-made, and I remember asking if Libby’s could look slightly scored–like a scorched orchid. It makes you not want to get too close to her.”

Hawbaker worked alongside legendary costumer Albert Wolsky, who dressed Bale and Washington. When our main trio go to visit De Niro’s character, Washington sports a pinstriped suit that is both stylish and masculine. It’s the suit of your dreams, and Hawbaker tipped her hat to her colleague.

“I worked with the great Albert Wolsky,” she said. “When I stepped onto the project, Albert had infused that DNA into those characters, and he created that impeccable suit. He also created Burt’s tweed suit with the green bowtie with the pink-ish shirt. It’s such a master class of character meets costume design. That pinstriped suit was created for John David, and I added some styling elements like the hat and a shirt-tie combination. That’s the bar that I had to make sure that I had to hit. I needed to make him proud.”

With so many looks, it was difficult for Hawbaker to decide which she would take home for herself. I revealed that I would want to steal Taylor Swift’s high, black collar (her dress is a deep emerald–the color of money) or a shaggy-cuffed sweatshirt sported by Bale halfway through the film.

“That coat that Burt wear is the shearling collared deco coat that you see on Valerie when Harold is saying that they need to go back to the States. We played it off as friends switching stuff off. It’s like picking a kid–I am so attached to them.”

Amsterdam is available to rent now.