Oscars 2023: 13 Years After Avatar Almost Won Best Picture, The Way of Water Brings It Back

Download: Oscars 2023: 13 Years After Avatar Almost Won Best Picture, The Way of Water Brings It Back

2009 was the first year of the preferential or ranked-choice ballot. Avatar came in at the end of the year, wowed everyone, became the highest-grossing film of all time (at the time), and brought Jim Cameron a Best Picture/Best Director win at the Golden Globes. But that night, his ex-wife and the director of The Hurt Locker, Kathryn Bigelow, was sitting in the audience, and there was a chance we were about to see the first woman win the top prizes. Watching Cameron win instead was a bit of a buzz kill for those who were right at the edge of a revolution — a great “Awokening” — that would change everything.

Bigelow and Cameron, Avatar and Hurt Locker: the highest-grossing movie against the lowest represented a potential dystopian vision for the future of Hollywood at the time. Actors would be replaced by performance capture, visual effects movies would crowd out the nuts and bolts dramas. All of that was humming alongside the drama of a Bigelow vs. Cameron “Battle of the Exes.”

Cameron’s Avatar was incredibly ambitious but it depended on people seeing it in the movie theater, preferably in 3-D. It did not translate to screener and looked a little silly on most home screens. By contrast, Bigelow’s film translated very easily to DVD screenerseverything. It was also the first year after Barack Obama won the presidency — an event that would do more to shape Hollywood than anything until Trump won in 2016.

Hurt Locker was about the war in Iraq that was meant to finally end. But it was also about the first woman winning Best Director and Best Picture. That mattered more. Of all of the ways Hollywood was influenced by the election of the first black president, it was this need to make history by continually achieving “firsts.” For the Obama coalition, then and now, they needed to be “good people doing good things.” Granted, that’s always been true of Oscar voters. It’s just that the movies now had to depict their protagonist doing good things for voters to feel like their votes counted. It didn’t use to matter whether the protagonist was a white male or the director was a white male. Now, it matters a lot — almost more than anything else.

First female Best Director winner would be followed by first Best Picture winner by a black director (though no black director has yet won), then by the first Best Picture winner in a foreign language. And after the Green Book apocalypse of 2018, things seem to have shifted away further from white male directors, almost like a black list. We still do not know if we are out of that. But I bring this up because that would be among the obstacles that would hold back Jim Cameron again, 13 years later.

But it also would hold back Steven Spielberg for The Fabelmans, come to that. It would benefit Women Talking and Everything, Everywhere, All at Once.

The initial reactions by those who have seen Avatar: The Way of the Water are overwhelmingly positive. I can’t review the movie here — I can only talk about how people are reacting. I would just say that the less you hear about it or read about it, the better.

Avatar: The Way of the Water has one advantage now that the original Avatar didn’t: Hollywood movies are dying. They are having a hard time bringing people into theaters, as the majority seem perfectly willing not to spend money or risk getting COVID to pay to see something they can see on streaming pretty quickly. In fact, before this movie screened I had convinced myself this was the end. There was nothing left. It was all streaming from here on out. 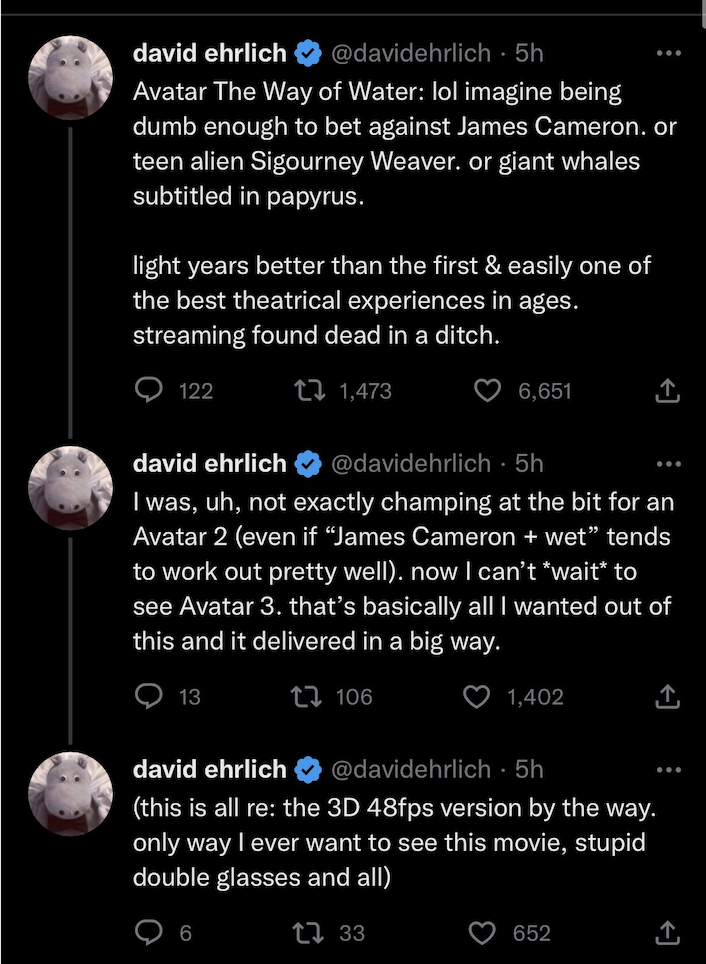 While it’s true that it is likely still the end for the kinds of movies Oscar voters still seem to want to vote on, this film is a pretty good indication that movies of this scale that cost this much, gives you your money’s worth and then some, are only just getting started. Welcome to the era of the “event movie.” But what an event!

The Academy will have to decide what they want their future to be. Do they want to make the Oscars about the kinds of movies they like, or are the Oscars going to keep up with the times and pick movies the public likes. Voters don’t vote that way, of course. They have no choice but to pick what they respond to emotionally.

The one thing we know for sure about the modern era is that we no longer have sweeps. Best Picture winners usually win about three Oscars in total. The Hurt Locker and The Artist are the two winners with the most trophies in the current era, with The Hurt Locker winning both tech and major awards. But that has changed — now, they split up. The big technical marvel goes one way, usually taking Best Director (but not always), and the smaller character drama takes Best Picture.

Last year’s split between The Power of the Dog for Best Director and CODA for Best Picture was weird. It was unusual. Jane Campion had the momentum heading in, with a film with the most nominations (12) up against a Best Pic nominee with the least (three), which ended up winning Best Picture. Both of them were on streaming platforms.

Now, we have The Fabelmans, a theatrical release by the guy who wants to save movies and the guy who once predicted our future to be “event movies,” vs. Everything Everywhere All at Once, which was the rare indie to draw a crowd in the theaters. Then we have Women Talking, a #MeToo movie in the same year of the Harvey Weinstein/Paul Haggis trials, where there are three #MeToo movies in the race, along with TAR and She Said.

Women Talking fits more in keeping with the new generation of the Academy, which prioritizes social justice issues. It is worth noting that Everything Everywhere All at Once has a social justice message as well — it’s about a conservative-ish parent accepting her gay daughter. And, of course, Avatar has a very strong, pro-environment, “protect the oceans” message.

The Fabelmans is the one movie of the bunch that is a memoir: Spielberg’s self-portrait of the artist as a young man. I can give you a million reasons why it would have a harder time winning today, in 2022 — but the truth is, none of us knows yet how the voters will feel by the end, whether they connect with the story or with Spielberg’s entire career. It is an interesting mix of movies, that’s for sure.

Either way, we have a formidable contender in Avatar: The Way of the Water. We have the one movie that could theoretically sweep. Its biggest obstacle now, as it was back in 2009, is the actors. In general, they are not too happy about performance capture. Then again, are they happy that their business is dying? I guess it’s a toss-up.

Dune won the most Oscars last year, but not Best Picture. That has been the trend in the era of the ranked-choice ballot, which is why I think they should abandon it. Best Picture should be what all branches are passionate about, not this compromised version. I think that has hurt the Oscars over time.

Either way, here are the tallies so far: 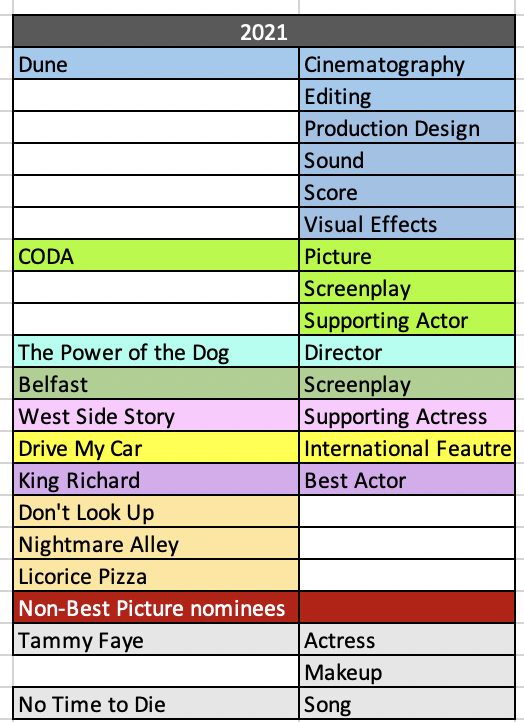 Saturday Night Live emerged last night as actually funny for a change. Here, they poke fun at just how obscure...