Apologies to Clement Clarke Moore and to our readers in general…

‘Twas the Squad before Christmas, when all through the ranks,
Despite Elvis and Otto, there was no Tom Hanks.
The predictions were posted on the site with care
In hopes that Film Twitter soon quickly would share.

The Fabelmans rested asleep in their beds
While visions of hot dog fingers danced in our heads.
Everything Everywhere took over the top.
Might their momentum prove too strong to stop?

We expected Avatar to premiere with a clatter,
But now we’re wondering if box office will matter.
Away to the theater we flew like a flash.
Second viewings for some, goodbye to our cash!

Critics and guilds are just starting to show
Giving the luster of Oscar to those films below.
When, what to our wondering eyes should appear,
But Damien Chazelle with the biggest risk of his career!

With Babylon’s reviews divisive as heck,
It drops in the ranking, but only a speck.
Ready for insanity, his actors they came,
And he whistled, and shouted, and called them by name;

Director, it seems, remains quite the same,
With nearly everyone checking Spielberg by name.
Distant in second McDonagh does sit
With The Daniels in third at a distance to spit.

But then, in a twinkling, James Cameron did appear
To knock Sarah Polley to sixth place I fear.
Is there someone we’re missing? We’re looking around!
Perhaps RRR’s S.S. Rajamouli will astound!

With actor, Colin Farrell repeats at the top.
Fraser and Butler his streak they must stop.
Butler hosted the Xmas Saturday Night Live,
And that could keep his Oscar dreams alive.

With actress, Cate and Michelle are in a dead heat!
If this one could tie… boy that would be neat!
Some would think Cate has it sewed up like a bow,
But how can you deny the great Michelle Yeoh?

The only item on which we all agree
Is Ke Quan’s got this clean and free.
He’s run the gamut of the Supporting Actor race
Putting “Short Round” behind him with style and with grace.

Supporting Actress is really quite the mess
With little agreement when Squaddies assess.
One thing’s for certain, and this is to Neon,
Strike up that campaign for Dolly De Leon!

We spoke not a word, but went straight to our work,
And filled all the rankings with no one a jerk,
And laying our fingers aside of our nose,
And giving a nod, to the net this post flows.

Santa’s in his sleigh, and to the New Year we head
With popcorn and screeners to watch in our bed.
So thanks we exclaim, even to those with whom we fight,
HAPPY CHRISTMAS TO ALL, AND TO ALL A GOOD-NIGHT! 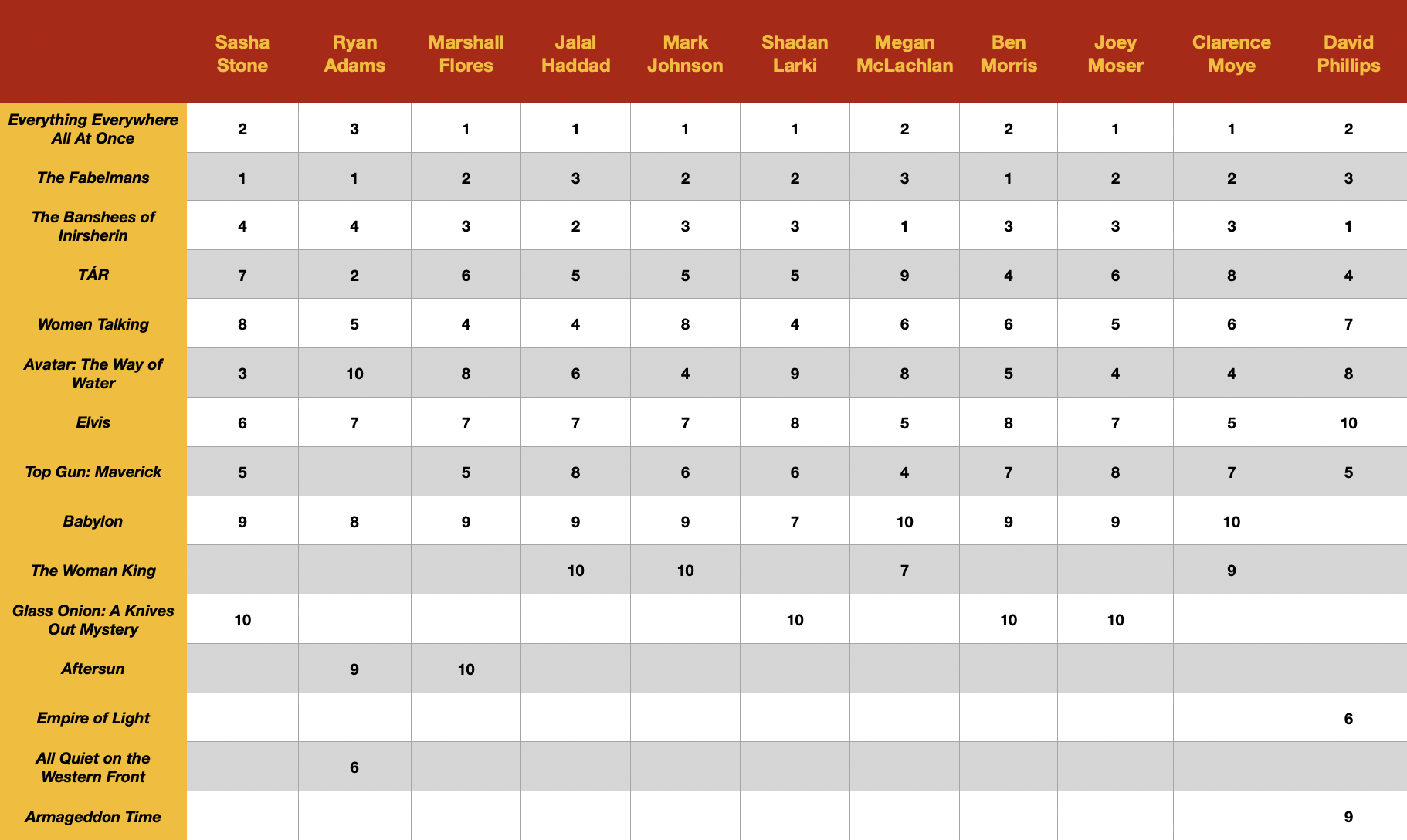 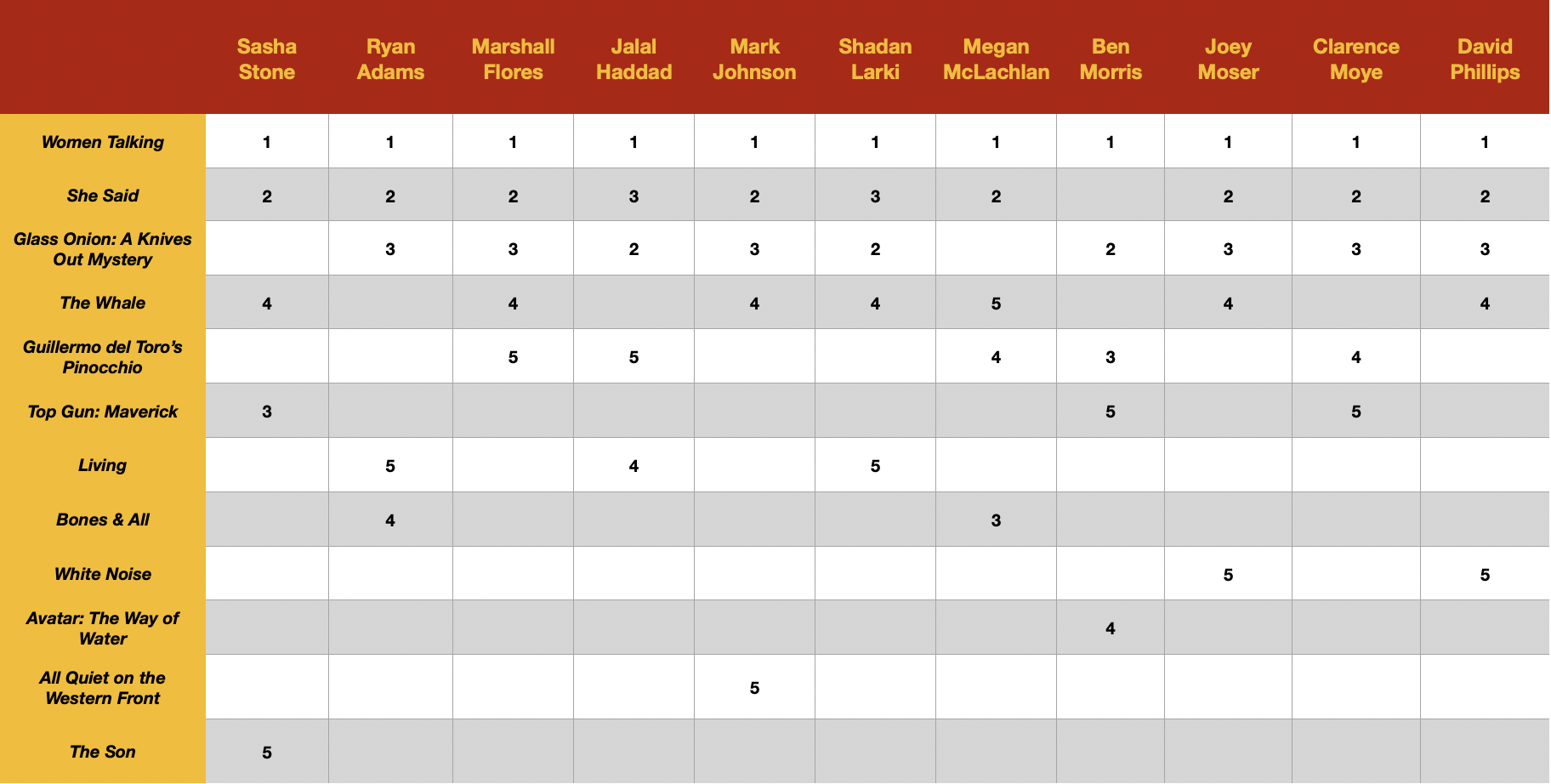 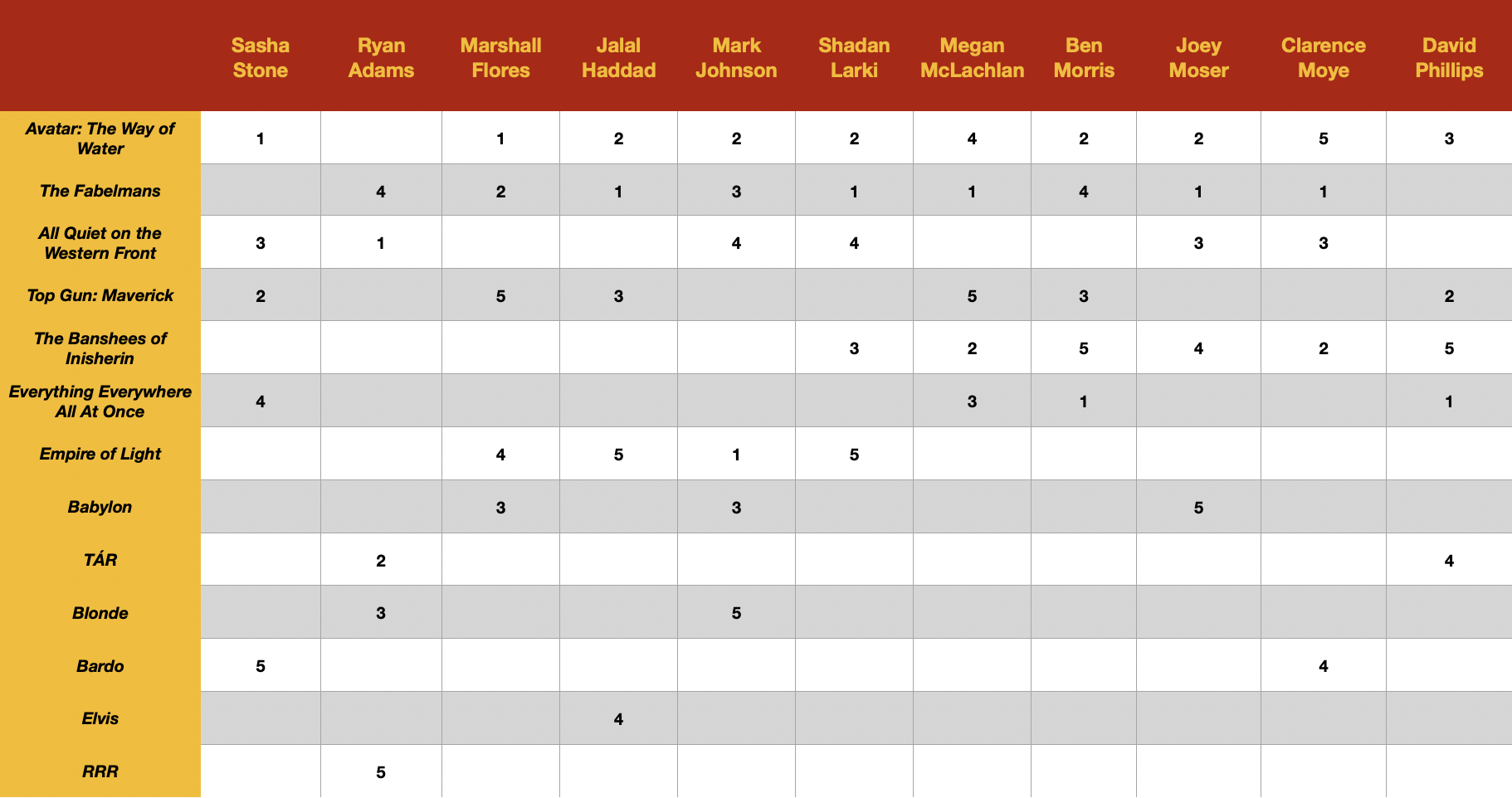 Well, it's been a week. When the Academy of Motion Picture Arts and Sciences announced the 2023 Oscar nominations last...

'Babylon:' Chazelle's Playing It Fast and Loose and All That Jazz

Coffee Talk: Catching Up on the Latest in Movies and TV