Tuesday morning Oscar nominations drop. They’ll be available everywhere, via livestream. We’ll make sure to post that streaming link early in the AM. I haven’t finished watching all of the shorts. I’ve almost made it through the animated category, well enough to spitball five of the best. Oscar predictions are often made or broken with the shorts. The better you do on those, the higher your score overall.

People who do well with Oscar predictions in unpredictable years like this one tend to be people whose personal taste aligns with the Academy’s. In that case, you’re likely to do very well. The trick is figuring out which films hit and didn’t. We have no idea, for instance, whether Babylon is going to land. Does Black Panther: Wakanda Forever make it in? Just how much will they love Top Gun: Maverick — enough for Director and Screenplay, maybe Best Actor? Or not at all and just barely Best Picture?

Conversely, if you don’t like a movie and you don’t predict it, that can sometimes hurt your chances, obviously. I am particularly undone if I have a blind spot to a film that others seem to like much more than I do. Such is the case with Triangle of Sadness, which many pundits have throughout their predictions, for Best Picture and even Best Director. That one is hard for me to wrap my mind around, so the only reason I’d be predicting it is because I was copying them.

Figuring out what films are going to be on voters’ minds and why is usually how to be a good Oscar predictor. Sometimes this intel can be gathered by talking to voters. We can use stats, which are sometimes reliable. But they can be deceptive, too, like the recent 14 BAFTA nomination haul for All Quiet on the Western Front. Had the BAFTA noms come out before the Oscar ballot deadline, there is no question it would dominate. Consensus builds the more people put their support behind certain films. But it has to start with a big nomination score like that. We don’t know if Oscar voters will independently single out the film.

There is likely to be a lot of anger when the nominations come down, I figure, particularly where women are concerned. The thing about that, though, if there isn’t a strong consensus around one nominee it’s hard to push them into the race. For all of those trying to push for Sarah Polley, there is an equal number pushing for Charlotte Wells and Gina Prince-Bythewood. That, of course, just means they split up their own voting block. I do not know whether that will be the case this year (no one does), but just putting it out there.

Erik Anderson has posted his final Oscar predictions one by one, category by category, with the latest being Best Director. I imagine Best Picture is coming soon. Scott Feinberg’s are here. Clayton Davis’ are here.

And, of course, you know that Gold Derby‘s predictions are all up on their site.

When it comes to years with 10 nominees for Best Picture (as opposed to five, or the variable number between five and 10), we know we aren’t going to be in a situation where there might be eight or nine. We know they have to put 10 in there, so in a sense that makes it easier. We just don’t know which of the films on the cusp will get in. I have found that they tend to be pushed in with three factors: 1) they are tied to an acting performance (The Blind Side, Philomena), 2) they are critically acclaimed and pushed by critics (Drive My Car), and 3) they are there because it took a village to get them there (Selma).

All three of these types of stragglers usually don’t come in the race with a lot of nominations. Usually you can tell how popular a movie is if it hits many different categories. If it only lands in Best Picture and Acting, obviously it was mostly favored by actors. They have a big enough branch in the Academy to drive a movie toward a Best Pic nomination.

In the case of Drive My Car, there had to be some support from directors and writers to get that movie in the Best Picture race. The ones with multiple nominations across the board, it should go without saying, are in the race because most of the membership put them there.

I think it’s likely The Banshees of Inisherin and Everything Everywhere All at Once will lead with multiple nominations across all categories.

With that said, let’s get to it.

Safe:
Everything Everywhere All At Once
The Banshees of Inisherin
The Fabelmans
Top Gun: Maverick
Avatar: The Way of Water
TÁR
Elvis
All Quiet on the Western Front

The films on the bubble for me include:
Black Panther: Wakanda Forever (Angela Bassett as frontrunner)
RRR, Babylon

Original Screenplay
The Banshees of Inisherin
TÁR
The Fabelmans
Everything Everywhere All at Once
The Menu
Alt: Triangle of Sadness; Aftersun; Elvis

Editing
Top Gun: Maverick
All Quiet on the Western Front
Everything Everywhere All at Once
The Banshees of Inisherin
Elvis

Cinematography
Top Gun: Maverick
All Quiet on the Western Front
Avatar: The Way of Water
Empire of Light
Elvis

Sound
Top Gun: Maverick
All Quiet on the Western Front
Avatar: The Way of Water
Elvis
The Batman

Animated Short
The Boy, the Mole, The Fox and the Horse
An Ostrich Told Me
New Moon
Save Ralph
My Year of Dicks 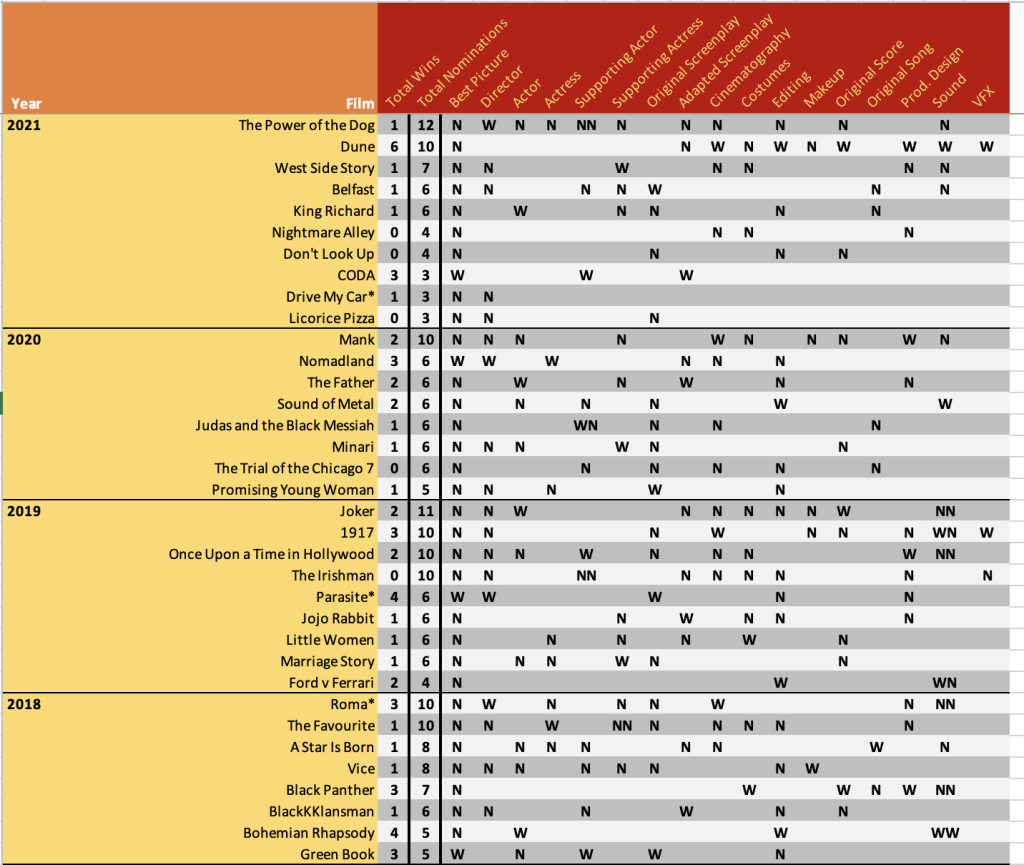 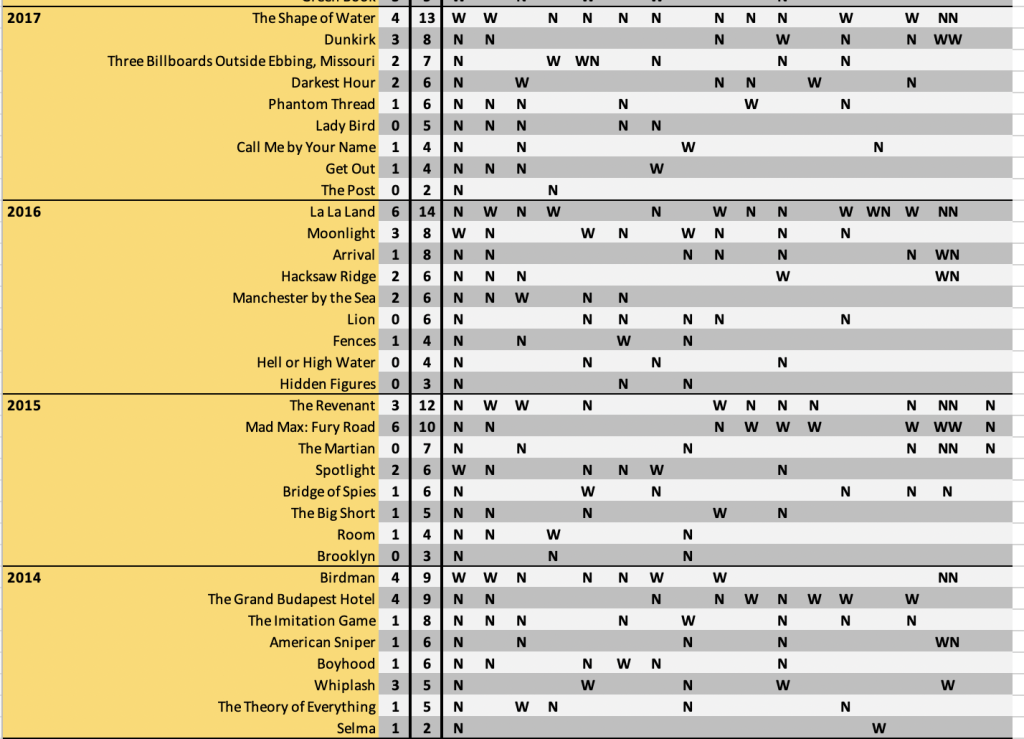 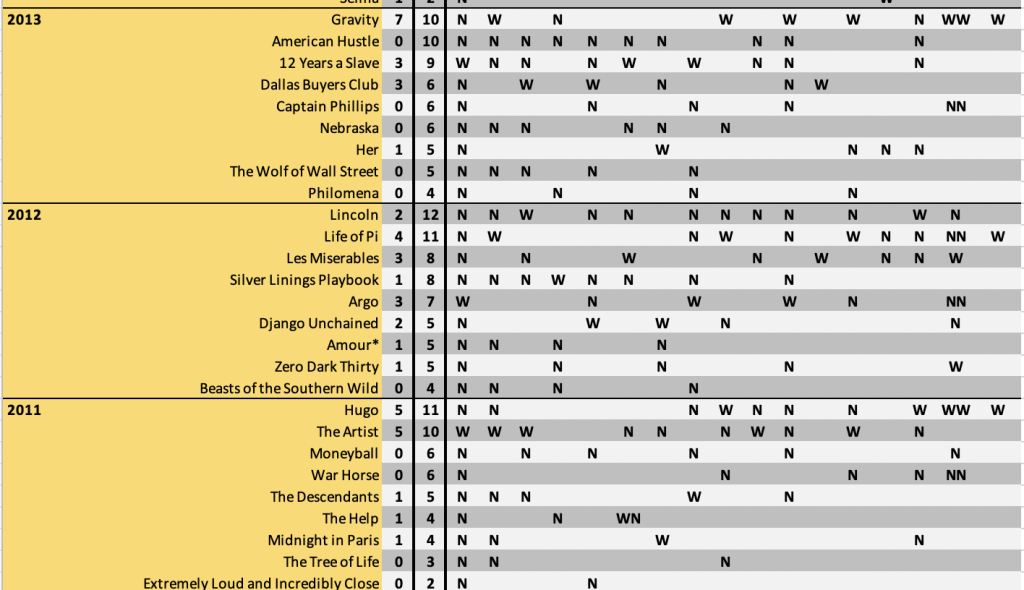 Four of us hashed out our nomination predictions category by category before tomorrow's nomination announcement. Have a listen.