The Emmys can sometimes be a little slow to welcome new blood into their acting circles. Since shows are on for years, it seems the nominees for certain categories are the same year after year. Outstanding Lead Actress in a Comedy Series has some much-loved standbys, but should these ladies be prepared for a surge of newcomers to enter the race? This is such a crowded category of absolutely wonderful actresses.

When Julia Louis-Dreyfus is nominated for the fourth consecutive time for Outstanding Lead Actress in a Comedy Series for Veep, it will be her ninth nomination in total. She will join the company of the late Bea Arthur, and she could eventually wind up being nominated as often as Mary Tyler Moore (who has 10 career nominations in the category). Fans of Veep will agree that Season 4 was a pinnacle for the series, so Louis-Dreyfus getting in will surprise absolutely no one. One slot is locked up for sure.

Parks & Recreations’ Amy Poehler is at the top of the list of actresses who are overdue in this category this year. Devotees of the beloved series are begging for her to finally win a statue for her lovable Leslie Knope, but is nostalgial for the show enough to grab her final nomination? The final episode aired in late February, so let’s hope that she can pull out one last nom. I think she’s in.

Of the main nominees over the last few years, Edie Falco (Nurse Jackie) and Melissa McCarthy (Mike & Molly—yes, it’s still on) seem like the two that will drop out if new blood emerges. People seem to always think Girls’ Lena Dunham will fall every year, but she’s managed a nominated for the past 3 years. Taylor Schilling is now competing in the Drama Actress category, so the Orange is the New Black actress only had a mild flirtation with Comedy Actress last year (cut to nomination morning, and all 3 of these ladies are nominated and my face is a deep shade of scarlet).

Threatening to take not one but two spaces are the stars of the newly binged comedy, Grace & Frankie —Jane Fonda and Lily Tomlin. Two actresses haven’t shared this category since Teri Hatcher, Marcia Cross and Felicity Huffman all duked it out for the freshman season of Desperate Housewives. There’s always talk of whether one actress will get in while the other doesn’t (or is that just for movies?). Both Fonda and Tomlin are great on Grace & Frankie, but they aren’t the problem. The show around them isn’t as strong as they are even though it finds its feet halfway through the season. Will viewers finish their binge and make it that far?

While both are great (especially together), Tomlin’s Frankie is the more immediately likable of the two. Fonda is a strong presence (as always), but she reacts to her husband’s coming initially in anger. Tomlin displays more heartbreak from the beginning of the series, but they are equal in screen time and story. No one could argue that one is lead and one is supporting. At this point in the race, both could definitely get in. The show was recently renewed for a second season, and there is mad respect for both of these awesome women.

Speaking of Netflix comedies, Ellie Kemper could land a nomination for playing the title character in Unbreakable Kimmy Schmidt. I have a feeling that the love for Schmidt will wane by the time voting is in full swing (we all went to bat for it during our podcast a few weeks back). The show debuted to acclaim in early March, and the reception was very overwhelming. It is the definition of a bingeable comedy—fast, fun, and zany, and Kemper is lovable but not cloying. It would have been easy for the characters around Kimmy to steal the spotlight from her, but she holds her own. Tituss Burgess was the only actor in the ensemble to snag a nomination at the Critics’ Choice Television Awards. I suspect that she will be on the fringe in terms of getting in. It’s definitely possible, but I think she’ll just miss out despite how deserving she is. Will the 30 Rock connection surge her into this category? Gina Rodriguez seems like the newcomer with a nomination heading her way. Jane the Virgin’s premiere season was a surprise smash, and it landed on several critics’ end-of-the-year best lists last year. It’s the definition of a star-making turn, and Rodriguez has been nominated for a Critics’ Choice Television Award and won a Golden Globe. Her only detractor? The CW has never produced a nominee in this category in the network’s history. But does that even matter? I doubt it. Rodriguez is likable, charming and smart, so I doubt people will even think about that when they cast their ballot.

We come to a point where we must consider four different, but very worthy, actresses. If it were up to me, Tracee Ellis Ross would get a spot in this race, because her work on black-ish is fantastic. As Bow, she balances a delicate act with her onscreen husband, Anthony Anderson. Whenever one of them is acting crazy, the other grounds them and tries to keep perspective. This role could be played wildly big, but Ross deftly manages to ground everything she does opposite Anderson. Don’t get me wrong—she can be fantastically over-the-top, and it’s a joy to watch. I could honestly watch her spar with Anderson nonstop.

Is Lisa Kudrow going to get in for The Comeback? It feels like a long shot, but fans of the show are adamant that she will make into this very tough year. Getting the show back feels like a victory enough and the award itself. You can’t stop watching her, though. Kudrow is one of those actresses that you love in everything she does, and you applaud whenever she, you know, comes back. 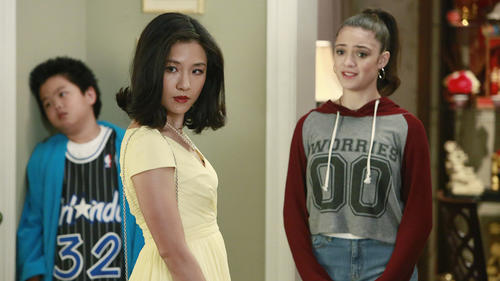 Constance Wu also received a Critics’ Choice Television Award nomination this year for Fresh Off the Boat, but, like Kudrow, it feels like it won’t happen. Wu is the best thing in the 90’s-set sitcom about a Taiwanese family starting over in Orlando. When you tire of something on this show, Wu swoops in and saves the day with dry one-liner. Her Jessica can deliver a joke, and you crave her presence whenever she’s off screen.

People may consider this final prediction a gamble, but it feels obvious to me. Amy Schumer will get nominated for Inside Amy Schumer. She’s everywhere right now, and she’s killing every time she pops up. Every week, people are talking about sketches from her Comedy Central series, and just when you are introducing it to someone new, a new sketch comes out. Trainwreck, her first major film role, will debut later this summer. Like I said—she’s taking over the world. Sarah Silverman was nominated in this category back in 2009, so people can shut their mouths when they begin to argue that her show is “too small” to get nominated for anything. If she somehow doesn’t make it in here, she will get nominated for writing. I mean, she has to, right?

Looking at my predictions, it’s almost entirely new blood. Be kind on nomination morning when I am totally wrong.

Emmys – For Your Consideration – Fargo is Exceptional Television