For many of us, the movie theater provides a sense of shelter. A refuge from our daily lives. It’s part of what we love about the movie-going experience: escapism. We turn on, tune in, drop out, and detach ourselves from our mundane, day-to-day existence, eschewing responsibilities and workloads that keep us bound tightly like a puzzle piece of society. It’s a two-hour break to recoup from whatever ails you.

It had been about eight months since I last stepped foot in a theater. I was able to catch Christopher Nolan’s Tenet on the big screen back in September of 2020, right around the time that theaters were shut down completely for reasons caused by the pandemic. I could regale you further about the joyful experience of returning to my home away from home – how the smell of freshly popped and buttered corn delivered nostalgia to my senses – but I’ll digress from this wistfulness to talk about the movie I was there to see.

John Krasinski’s A Quiet Place Part II turned out to be the perfect vehicle to bring us back to theaters. The sequel to the 2018 box office smash ($340,952,971 worldwide) took in $79,000,000 worldwide in its opening weekend. Quite the achievement for a film released at a time where most folks still seem wary to venture out to theaters. I can’t speak for all, but I will say that my local Cinemark took every precaution to provide a safe and relaxing environment.

A Quiet Place Part II opens with a small treat: a flashback to day one of the attack. We get just enough detail about the creatures’ arrival and how Lee (Krasinski) and Evelyn (Emily Blunt) helped their family survive the initial barrage. The sequence is loud and explosive, a perceptive and terrifying kickoff for audiences who have been trained to fear any form of sound in the Abbott’s world. The film transitions from this origin scene to the exact point where we left the Abbott family, who is now departing their home following the death of their patriarch. Evelyn is trekking across their mountainous, upstate New York terrain with her children Regan (Millicent Simmonds), Marcus (Noah Jupe), and her newborn baby. Leaving the nest and entering a world following the collapse of society adds a heightened sense of fear that we didn’t experience in the more secluded original film. Add the naturally loud infant (born during the first film’s climax), and danger seems to be inevitable for the foursome. As the family looks for a place to survive, they run into Lee’s old friend Emmett (Cillian Murphy), a bitter widower who is resistant to the idea of harboring the wearisome travelers. 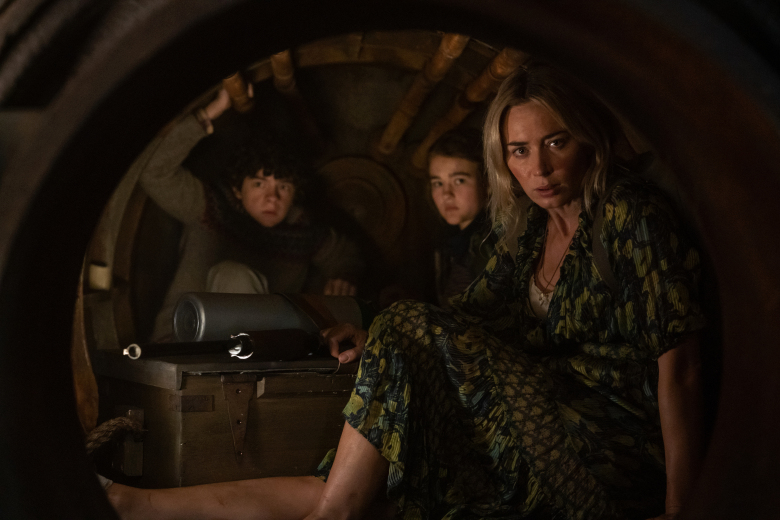 Regan’s hearing implant is kept close at hand and is aided by an amplifier she carries to weaponize the device. She is growing up quickly in this endangered world and is wanting to follow the signs of a distress call she overhears in the form of Bobby Darin’s “Beyond the Sea.” Despite knowing her mother would disapprove, she heads off on a solo mission to save those who might still be out there. There is much of her father in her, as her arc continues the storyline of the troubled parent/child bond displayed in the original film. Where that arc leads is much in reverse of the first film, which is more about the protection that parenthood provides. This time Krasinski navigates us through the phase of letting your children go to be independent. Trusting them to become who they are on their own – a challenge as scary to a parent as the near-indestructible monsters that hunt the Abbotts.

With that approach in mind, the children are left to carry the pivotal storylines of the film. The pair delivers two of the most outstanding youth performances I’ve seen in recent years. Simmonds is a rising star worthy of Oscar consideration, just as she was in the original film. Her gritty and susceptible performance is supported by Jupe’s unnerving, transformative turn.

One of the miracles of the Quiet Place franchise is how Krasinski gets audiences to sit silent for 97 minutes. Just as with the original, my audience didn’t make a peep throughout the film (other than the occasional startled gasp). For someone who was worried that audiences would forget how to behave in theaters, this was very much appreciated, and part of what makes A Quiet Place Part II the perfect first-film-back for moviegoers.

In part one, our fears were stimulated by any small sound that accidentally spilled from the Abbots, the tightly-knit family who built their survival around the challenges of living in complete silence. While Krasinski keeps that same nervous energy front and center, he dials up the adrenaline a bit in A Quiet Place Part II. There is increased interaction with the aliens in the the follow-up film, leading to more action sequences. The same nail-biting tension exists throughout the film, it just moves a whole lot quicker. Fans that prefer films like Aliens over the original Alien might appreciate this movie more than its predecessor for similar reasons. While I slightly prefer the intuitive brilliance of the original, part two left me immediately hopeful for a third chapter.

A Quiet Place Part II is an intense, hair-raising edge-of-your-seat thriller that wonderfully lures filmgoers back to the theaters. You’ll want to see it on the big screen, where a film of this magnitude deserves to be seen, and where you’ll find yourself returning home.