Truth vs. Fiction – When It Matters, When It Doesn’t

Download: Truth vs. Fiction – When It Matters, When It Doesn’t

This year, we’re seeing major films that are based on filmmakers’ reflections of their own lives – like Sam Mendes’ Empire of Light, James Gray’s Armageddon Time and Steven Spielberg’s The Fabelmans. Other movies, like Elvis and Blonde, are seeking to bring famous icons back to life. Then there are films being debated in terms of whether they adhere to history, like The Woman King, or whether their casting could be causing some controversy, like Brendan Fraser in The Whale.

For most of these movies, the chatter around them doesn’t really reach major outlets like Variety or Hollywood Reporter unless it’s a big story. Grumblings on Twitter or complaints made here or there ordinarily don’t register as anything worth making a fuss over.

The question of whether a film is accurate or faithful to history has been a point of discussion since I began writing about the Oscars two decades ago. A Beautiful Mind was barreling towards Best Picture and stories about its accuracy kept popping up and seemed to be intensifying. It looked like the film might have been derailed at one point, when the worst of these quarrels questioned whether or not the film glossed over Nash being gay as I recall. Here is a story from People in 2002:

The criticism often leveled at biopics is that they stray from the truth. In the case of Ron Howard’s Oscar hopeful “A Beautiful Mind,” the murmurs — that some of the seamier details about the movie’s subject, schizophrenic mathematician and Princeton professor John Nash, were glossed over in the movie — have turned into a dull roar in recent weeks, as the Academy Awards approach. The controversy finally proved troubling enough for the real-life Nash, 73, to face the cameras of “60 Minutes,” which aired an interview with him Sunday night.

Nash and his wife, Alicia, faced several allegations, including that he was gay and anti-Semitic. Nash said he made the anti-Semitic remarks during a bout with schizophrenia. “I did have strange ideas during certain periods of time,” Nash said on the news magazine show. “It’s really my subconscious talking. It was really that. I know that now.”

Another widely reported accusation, that Nash had an affair during his marriage, is also false, Nash biographer Sylvia Nasar told the L.A. Times. She said the relationship that led to the birth of Nash’s first son was over by the time he married Alicia Larde (played by Jennifer Connelly in the movie). In the “60 Minutes” interview, Nash also denied being homosexual but refused to discuss that subject further (in the film, Russell Crowe, as Nash, is shown exchanging long glances with handsome men).

Nash said only, “I’ve learned that it’s better that I don’t talk about it.” Alicia backed him up. “I’ve known him since I was 20 and that’s just not true,” she said. “I should know.” Howard blamed the criticism on Oscar competition. “If there’s an attack strategy, that’s an impolitic tool,” he told the Associated Press. “It’s not about reminding people of your virtues, it’s about undermining the other candidate’s credibility. That’s a shame.”

Imagine that many accusations leveled against a film because it was the frontrunner to win Best Picture and possibly Best Actor. To add insult to injury, Russell Crowe himself was caught up in a verbal spat and physical altercation at the BAFTAs which became such a big story that it likely contributed to his losing Best Actor to Denzel Washington for Training Day. Washington might have won anyway since Crowe had just won Best Actor for Gladiator, but there was little doubt that by then, the film had taken on a lot of water.

A Beautiful Mind still won Best Picture and Best Director because the “Oscar story” that year was that Ron Howard, who had been mildly screwed over for Apollo 13 (won PGA, DGA, SAG ensemble but missed out on a Best Directing Oscar – Mel Gibson and Braveheart took the top prizes that year), had made good and deserved to bring in a winner. Also, people really liked A Beautiful Mind and its only competition was the Lord of the Rings: Fellowship of the Rings which most people appreciated more than liked (except readers of this site who loved it).

Usually, a frontrunner or a threat to be a frontrunner will get hit where films that fly under the radar are left alone. Slumdog Millionaire was in a pickle over the children used in the film but it was such a juggernaut, nothing could slow it down. Kathryn Bigelow’s Zero Dark Thirty was most definitely derailed when it was accused of pushing the narrative that the CIA’s torture program had led to capture of Osama Bin Laden. That movie did not survive the controversy.

Probably the film that was given the hardest time for accuracy since then would be Green Book, which was more accurate but still somehow problematic. We don’t have to go through it. The film wasn’t being attacked for a lack of accuracy so much but because the filmmakers were deemed not qualified to tell the story of a gay Black man driving through the South. It pretty much comes down to that. Beloved across the board thought it was, the Bloggerati were angry and throwing things around the room. The movie won anyway but it shattered the Academy’s sense of itself.

At the moment, both Scott Feinberg at the Hollywood Reporter and Clayton Davis at Variety are bullish on The Woman King as a formidable Best Picture contender. The film has an A+ Cinemascore, an exceptional audience rating at Rotten Tomatoes, was directed by Gina Prince-Bythewood, and stars Viola Davis. It’s a crowd-pleaser and a money maker. Taraji P. Henson And SZA bought out movie theaters to support the film.

This is a film no one wants to see sink because of the film’s history. The press is fully in its corner: 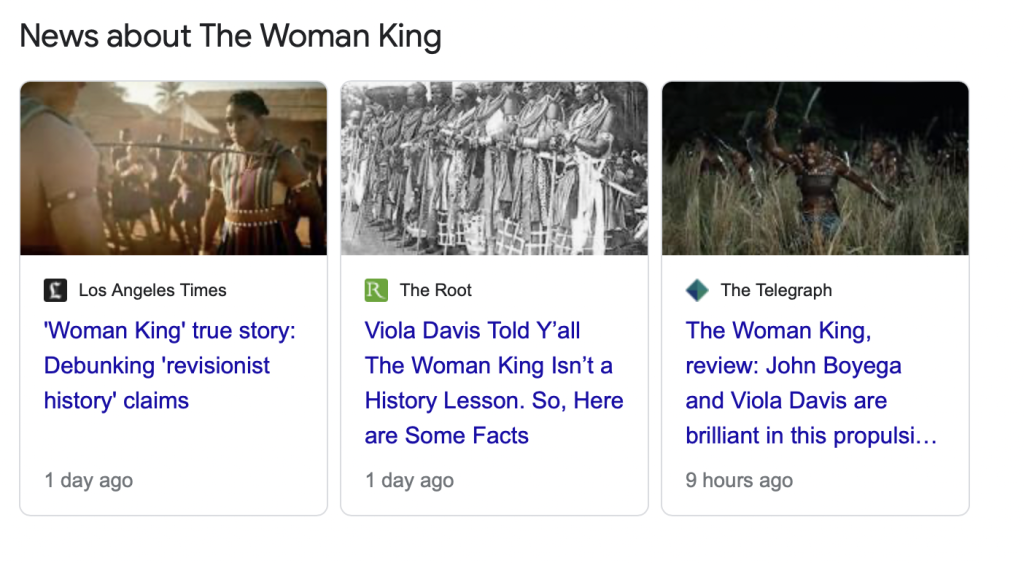 The question here is whether the press can keep the movie afloat or whether they can’t, or if it would be an Oscar contender anyway or whether any of it matters. Here is an opposing view: 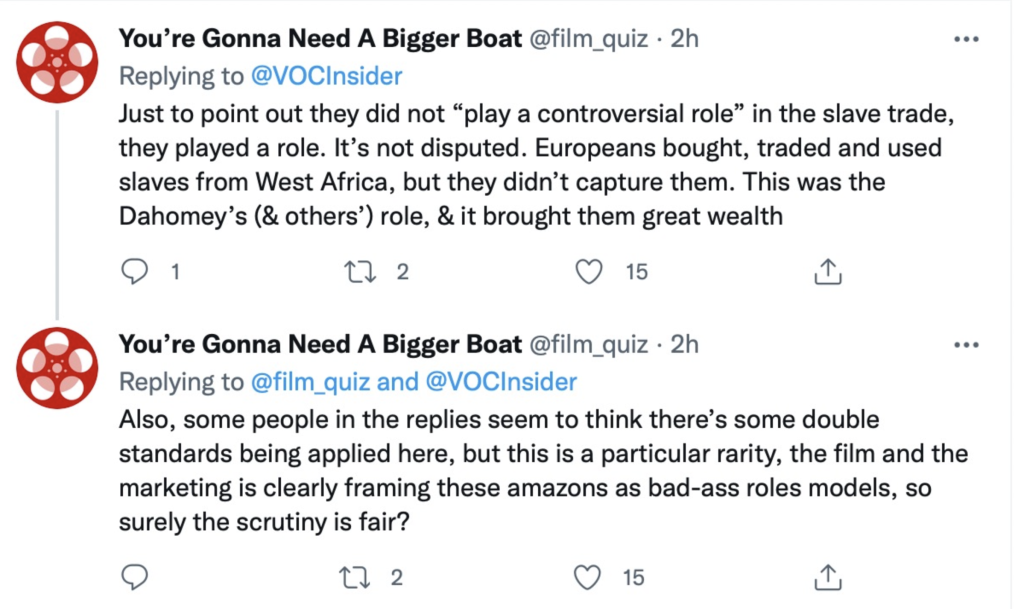 You can read more about the background here.

And the LA Times’ defense here.

This story seems worth talking about rather than trying to shut down conversation around it. The reason is the heightened tensions regarding slavery and its impact on the countries involved. People are murmuring, even if the press isn’t going to talk about it. That isn’t something you can simply pretend isn’t there. The question is, does it matter? Can people watch the movie and forget about that?

No one wants to see the movie sink because it’s extremely rare for Black women to direct blockbusters, let alone those that are as well-liked as this one, with an A+ CinemaScore and box office success. I believe not talking about history is more damaging to the film than being fully transparent about it and having a necessary conversation regarding that complicated history. I don’t know that full denial or dismissal is the way to go with this one. No one will care what I think because they would say this isn’t my place to discuss or even render an opinion on.  So I’m only talking about how I think Oscar voters might react without commenting on the history itself or the film.

The Hollywood Reporter has an interview with Daniel Franzese about The Whale. While praising Brenan Fraser’s performance, he wondered why they did not hire an “obese gay actor” to play the part. This question will be coming up again and again in the coming months. Sentiment has changed around this topic, as we’ve seen Julianne Moore say she would not play a gay actor today (as she did in The Kids Are All Right) and other actors have seemed to also express regret about being straight and playing gay.

My general view on that — again, people will say that it’s not my place — is that acting is acting. You’re not really supposed to BE the part you play. You’re supposed to use your craft as an artist to embody and portray someone who isn’t like you. But times have changed. Demands by the Zoomers are different. They are in most respects leaning towards a kind of puritanism. Their whole thing is for everything to be good and fair, so no one is marginalized, no one is harmed, everyone gets a seat at the table.

Dipping back into history for The Empire of Light and Armageddon Time also brought up some points for debate on both counts. These are films that involve stories of racism in different ways. In Empire of Light, Michael Ward’s character (who is really the film’s brightest light) is attacked by skinheads and has to deal with casual racism in the UK. According to writer/director Sam Mendes, this story is rooted in his experiences growing up and falling in love with movies.

In Armageddon Time, director James Gray tells a story of his own childhood where he and his friend were busted for a crime but only his friend, a Black kid, was punished. In real life, says Gray, the details were slightly different but the end result was the same. Gray’s point is less about his own coming-of-age story and more about his story of atoning for his own white privilege. As films that are subjective reflections of their own personal truths, they won’t be held to the standards of accuracy.

And then there are the two American icons, Marilyn Monroe (Ana de Armas) and Elvis Presley (Austin Butler). Both of these films have faced some chatter as to their accuracy. Elvis, for instance, has been taken to task for not emphasizing or retelling the story of how Elvis and Priscilla met. Those who know Elvis lore know that she was 14 and he was 24. By today’s standards, that is way off the field of acceptable. But back then, things were slightly different. The lore goes that Elvis and Scilla had no sexual contact until she turned 18, for what it’s worth.

Baz Luhrmann’s Elvis and Andrew Dominick’s Blonde are also conceived and shot as impressionistic takes on figures that loom large in our collective imagination. How big of a story would there be if either Austin Butler or Ana de Armas became any kind of threat to win. No one ever targets any movie that isn’t deemed a threat. Most films can survive the chatter if it bubbles up early and then evaporates.

The only film coming this year that might get more chatter as to accuracy could be Damien Chazelle’s Babylon, which does delve into some real-life people and events. These things don’t always kill a movie if voters like the movie. If they don’t like a movie, sometimes extraneous scandals that bubble up might give them a convenient out if they decide to put their vote elsewhere.

As far as The Woman King goes, there is power in numbers. If enough Academy voters stand behind it, they can most certainly get it in for Best Picture, especially if Viola Davis is in for Best Actress.