Brian Tyree Henry is one of the hardest working actors in Hollywood. This year we’ve seen him in Atlanta, White Boy Rick, Hotel Artemis, BoJack Horseman, Room 104 and Spiderman Into The Spider Verse. You might have caught him on Broadway in Lobby Hero. However, there are two performances at opposite ends of the scale where he’s been getting lots of attention.

First, as Daniel in If Beale Street Could Talk. Henry is in the film for no more than fifteen minutes, but it’s a moment that is the rock of the film, the soul. Daniel is out of prison and sharing his story, bearing his heart and soul with Fonny in a moment that serves as deep look into the life of incarcerated men after being released. It’s a striking moment, one that resonates deep.

Henry is also in Widows, as the politician Jamal Manning, running for office against Colin Farrell’s character. Another showcase performance from Henry. He’s in LA for Spiderman, but we snuck in a brief conversation about working with two of our finest directors, Steve McQueen and Barry Jenkins. 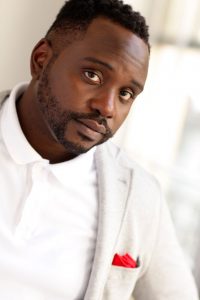 You’re having such a great year with the roles between Beale Street and Widows. One extreme to the other in terms of that. How did Beale Street happen?

I got a request to audition for the role when I was in LA. I got some assistance from Sterling to put me on tape. I told him there was this really cool script from Barry Jenkins and it’s James Baldwin. I’m one of the biggest James Baldwin fans. I’ve read his books since high school.

I had been to an event the night before and looked like shit ran over twice. I had felt like Daniel. He’d just gotten out of jail and was telling this experience. I couldn’t look worse for wear. I found out I got it.

I thought it was great to tell that story which people, unfortunately in my life or that I’ve encountered now, I wanted to make sure I did them justice and there’s a lot of heart to Daniel.

Even though it’s just one scene, it’s such a centerpiece of the film and such a foreshadowing. It resonates and haunts.

What Barry did was masterful. It was just a tiny room with Fonny’s artwork. I wanted to make it like a homecoming and it felt like a homecoming scene. Barry filmed most of the movie with two cameras, but for this scene he decided to use one camera and put it on a roller. Most times when you shoot a film, you can see the director, the AD, the monitors, but for this, he removed all of that. This time, they were on the outside looking in on us. We just did it. We sat there, we talked to each other. I’m so grateful there were cigarettes for this scene because I thought, “Jesus, I’m about to reveal this personal journey I went through incarcerated and it’s just me and him in that room.” There are so many parts I don’t remember doing. I don’t remember the camera being there at all and I think that’s the greatness of what Barry does. He just lets the actor live the lives of these characters and lets the camera capture what it is. You know that the energy moving from me to Fonny and he picks that up.

The score too! The score of this movie is so so so incredible. There’s weight and that’s what Barry wanted. It sits on your shoulders. I read the script and knew what was going to happen to Fonny. You are in the body of that person, you are sitting there trying to tell the story to your friend and hoping his outcome doesn’t turn out the same as yours does.

It was really great because you get to see this brotherhood between these two. You get to feel the essence of who they are to each other. Anytime, there’s a story like that and anytime I share a story with another black man, I think how are we coming across. I want to make sure there’s a kinship rather than something holding each other back and holding each other down.

It was heavy and it took a few weeks to shake Daniel off because I know Daniel. The unfortunate thing about this country is we know Daniel’s that come in and out and are here one day and gone the next. That’s even apparent in the movie. We don’t even know what becomes of him. That’s the reality of the system and the reality of the lives of black men in this country. I wanted to have that moment to speak out for them and to really share their story and to let people know that this is how it is and how it goes.

My favorite moment at the end of that was the dinner scene and to see us rejoice together regardless of us having dinner on this bathtub with that plank of wood on top of it. We made the best out of everything. It was so masterful.

I basically cried when I first saw the movie. I was sitting next to Regina King and we both had tears in our eyes. I’m telling you, both of our heads were tilted to the sides because we didn’t want our tears to fall on our outfits. It’s that thing where you realize you’re crying out of joy and out of pain. There’s something said about a film that can make you feel something like that viscerally from beginning to end. Just the story of love between these two people, not just black people, they are people living in time. At the end of the day, they’re not being seen as anything more than two black people. So, the story of their love was very important for me. It hit home. I’m so honored and so blessed that that scene resonates with people.

Then, there was Widows, a completely different role and another great filmmaker.

It couldn’t have come at a better time. All I knew was that I had just done an episode of How To Get Away With Murder. I was playing an attorney to Frank. Viola was being tried in court right next to me. The thing is I didn’t have any scenes with her, but I was in the room with her which is the metaphor of my entire career. I’m still in the room with these greats. Even if I’m not sharing the scene with them, I’m still in the scene with them. So, I was sitting there thinking it couldn’t be the last time I’m sitting next to Viola Davis. I had no idea in a million years it would be Widows. I had no idea in a million years it would be me threatening her life or the life of her dog.

Steve flew me to Chicago and we had a meeting. He wanted to know how I’d feel about being a part of the project, I told him I’d do anything. To work with him and share the space with the incredible cast.

The first scene I shot was that scene, right out of the gate. Viola was already in Chicago, we sat in a room at a table and got very intimate. We got on set and there was this dog. I thought leverage. The dog was fantastic. This dog was great. I’m always afraid to work with dogs and pets because they are who they are and they can be a very good judge of character the moment they meet you and they will act accordingly.

This dog was unbelievable. My first thought was not only am I in a room with Viola, but I am in her face. I have to let her know that what her husband did, affected my life. If it’s not corrected, then her life will be affected by me. It was the most out of body experience because I have to remove Brian’s inner monologue and let Jamal’s monologue come out. After we shot it, I remember going to my hotel room and standing there with my hands by my side wondering if I had really done that. I hope it came off the way I needed it too.

It created some really strong bonds. Daniel was the best thing to happen, I want to do so many more things with him. At the end of the day, I wanted ot make sure that Jamal didn’t come off as a villain. The villain of the movie is the juxtaposition of the male relationships and the business that they carry and how they have these secrets from the women who held them down from day one.

His motive is very clear. He wants to be in politics in the neighborhood that he’s born into the one he’s seeing be affected by the socio-economic status that Chicago has placed on him and people like him. He really wanted to make the city better. He’s seen these other politicians do it, he’s seen the compounds they live in and yet they are just ten blocks away from where he grew up and they’re two different worlds completely. I think that Jamal’s fantasy was to always have that. It’s true. Chicago is the city that made him, but it’s not happening for him the way it did for the other family.

Working with Colin was so awesome and to learn the way our characters get their business done is not that different. Chicago is amazing but it still had its downfall when it comes to race and class. I wanted to be the character that embodied that. Anytime I get to play a character born or raised in these cities, I want to make sure I do them justice. I don’t want people coming for me. I want to be giving homage to who they are and the places that made them.