by Jalal Haddad
in ADTV
1

Celebrating the first Emmy nomination for Bojack Horseman creator Raphael Bob-Waksberg and star/executive producer Will Arnett treated a room of Emmy voters to  screening of the nominated episode “Free Churro.” Following the screening the room of largely animation peer group members watched a Q&A with the executive producer and star.

The nomination for “Free Churro” marks a pivotal moment for the critically acclaimed series as its first time in the Outstanding Animated Program category in its five year run. This is also a first for Netflix in the category with the streaming network breaking into the category for the first time both for Bojack Horseman and Big Mouth.

The critically acclaimed episode of the fifth season is a bit unusual for Bojack Horseman and animation in general. The episode served as a bottle episode for the season as Bojack spends the entire episode eulogizing his mother with a dark monologue unpacking 50+ years of pain.

Besides a brief pre-intro scene the point of view never lingers from Bojack’s relentless eulogy. Raphael Bob-Waksberg (who also wrote the episode) spoke on what inspired the writers’ room to take such a creative risk. “Every year we try to challenge ourselves more in the writers’ room. We ask ourselves “what’s a different kind of episode we haven’t done before?” and “what’s a new way of telling Bojack’s story?” The idea of doing a monologue episode was really interesting. We were really emboldened by the fact that we have this amazing actor in Will who five seasons in has given this incredible performance year after year.  This wasn’t the type of story we would have had the confidence to try in season one but now we knew he could pull it off.”

So how did they go from an idea of an episode long monologue to Bojack processing his entire relationship with his mother while delivering her eulogy? Throughout its first five seasons Bojack Horseman has explored some incredibly dark themes so Bob-Waksberg knew that to justify the episode they would need to build up to something big. “We’ve been setting up this relationship with his mother for several seasons now and the episode is an excellent payoff to that story.”

“This episode is a linchpin in one of the major themes of the season which is Bojack struggling with this question of whether or not he needs help and his own personal questions that arise from that. He battles with this question of whether or not admitting he needs help is a weakness or if he should do it all by himself. The conclusion he comes to at the end of this episode is that there’s no one looking out for him and that it’s wrong to ever think someone could be. That attitude is something we inserted throughout the series but it really comes to a head in this season and that kind of thinking gets him in a lot of trouble. Overall this episode is really instructive and helpful in telling that story.” 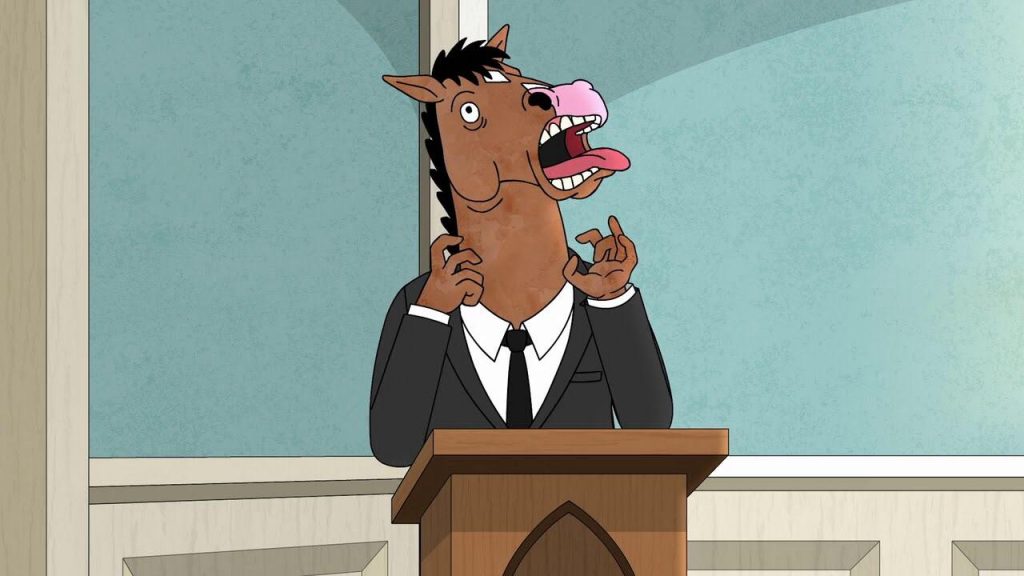 One of the other challenges of the episode was not being able to rely on some of the comedic gaga that have become staples of the show whether it be background gags or animals constantly walking by. But Arnett and Bob-Waksberg were confident the episode was in good hands with director Amy Winfrey.

“In some ways it was more difficult because it all relies on this subtle face acting animation. We had to find ways to keep the audience interested for 25 minutes without all of the bells and whistles and usual tricks. You take all of that for granted because it feels so natural and lived in. You don’t think about all of the tiny decisions that have to be made. When is he upset? When is he smiling? When does he sound upset while he’s smiling and when does he sound happy but his face is upset? Every single decision had to be made first by Will in the booth and then by Amy and the animators beat by beat on how this episode would play out.”

Overall Arnett couldn’t praise the show and Bob-Waksberg enough especially for the constant creative risks they continue to make. “What’s been admirable is Raphael’s willingness to constantly push himself towards the edge and ask uncomfortable questions while also admitting he might not know the answers. As an actor I am constantly given material that I have never seen before. It’s really remarkable.”

Bojack Horseman is eligible at the 2019 Emmys for Outstanding Animated Program. All five seasons are currently available to stream on Netflix.