There is a lot to unpack in House of Gucci, Ridley Scott’s outrageous real-life story of crime and passion surrounding the Italian fashion dynasty. It is a bizarre and outlandish soap opera that has its highs and lows, and thus will be divisive amongst fans and critics. There was something intangible to it, though, in all its eccentric madness, that intrigued me.

House of Gucci is based on the 2001 book The House of Gucci: A Sensational Story of Murder, Madness, Glamour, and Greed by Sara Gay Forden. It is a tale of wealth, power, and betrayal culminating with the murder of Maurizio Gucci (Adam Driver). Lady Gaga stars as Patrizia Reggiani, an ambitious firecracker drawn to Maurizio’s wealth and potential. Maurizio is moderately more restrained than Patrizia. He is an absent-minded aristocrat, attracted to her Elizabeth Taylor-esque beauty and animal magnetism. The odd couple begin an unlikely romance, one that Maurizio’s father, Rodolfo (Jeremy Irons), does not approve of. Their marriage creates a crack in the Gucci foundation, splintering the father/son relationship and emphasizing the fact that despite how much Patrizia desires it, she will never fully be a Gucci. This fuels Patrizia’s eagerness to prove her worth. Maurizio has little interest in the family business, leading Patrizia to often go above him without his knowledge. Like a modern-day Lady Macbeth, Patrizia entangles herself in situations where she does not belong and pits those who hold real power in the Gucci empire, Rodolfo and his brother Aldo (Al Pacino), against each other. Like a simmering pot, Maurizio grows increasingly aware of Patrizia’s questionable ideological and ethical actions. The feud boils over and the two grow apart, as one betrayal after another spirals into a series of events that end in murder.

Ridley Scott acquired the rights to Forden’s novel nearly twenty years ago. The production went through a variety of directors, cast, and crew before finalizing the staff in the summer of 2020. There were rumors of Angelina Jolie, Margot Robbie, and Penelope Cruz being casted for the role of Patrizia, but Scott finally landed on Gaga. And while no disrespect is meant for those other wonderful actresses, I can’t imagine anyone doing more with this role than what Gaga realizes onscreen. She brings an authenticity to her Patrizia that could very well have been portrayed as an exaggerated parody. While some will criticize Gaga’s accent to be more Russian than Italian (including the film’s dialect coach Francesca De Martini), there are few that can deny the unstoppable sizzle she brings to the screen. Like Patrizia, Gaga exudes charm and charisma with equal parts killer instinct and determination. She disappears entirely into her role and accomplishes a turn worthy of her second Oscar nomination for Lead Actress.

While Gaga’s depiction is the best of the bunch, there is a smattering of other colorful portrayals that are worth celebrating. Al Pacino gives 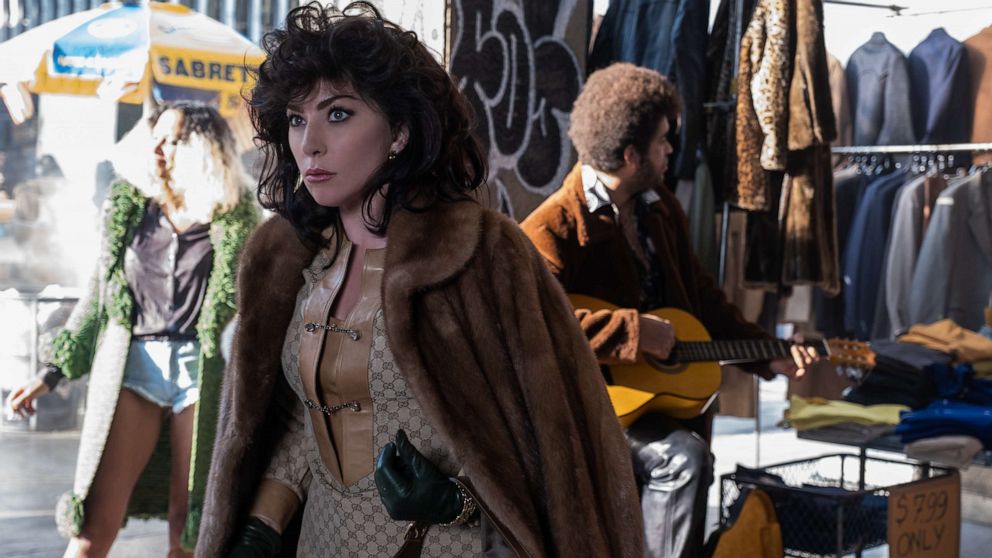 one of the best performances of the later part of his career as the loving uncle who is facing ruin. Driver is low-key and effective, and Irons is snobbishly delicious. Many are praising Jared Leto for his performance as the clownish, boy-prince Paolo, though I found his part to be more of a silly caricature. One that threw a wrench into the entire production. It wasn’t his performance that irked me, but more how his character was so separate from everything else going on in the film. This is where my biggest criticisms of House of Gucci lie.

Intermittently switching between flippant camp and cold sober drama, the script for House of Gucci is a tonal mess. While the performances might be designer boutique, the writing and pace is thrift store fodder. The 157-minute runtime is a bit outlandish, as well. While Scott tries to cram three decades of Gucci peaks and valleys, there is too much story being squeezed into the film that one could argue the excessive duration was simply not enough. I hate using this tired cliché, but the film might have been better off as a mini-series. And don’t get me wrong, there is nothing wrong with a film running over two and a half hours. A lot of my favorite films run longer than that (The Godfather, Lawrence of Arabia, The Bridge on the River Kwai, etc). The problem I have with the length of Gucci lands with the decisions made on the cutting room floor. I would have preferred to see less of the fortune-telling Pina character (Salma Hayek) and instead been shown even an iota of what led to Patrizia being caught. It might have been compelling to have been given a tad more than the few moments we get of the trial that ensued (imagine a bit of Gaga on the stand!)

When the story focuses on Maurizio and Patrizia’s flailing relationship and doomed climax it moves in a way that I really admired. That can mostly be contributed to the chemistry Driver and Gaga had together, and the talent we are witnessing onscreen. While I feel House of Gucci is a missed opportunity for Ridley Scott – a director I have cherished since the infancy of my love for movies – I’m left wondering if the tonal imbalance was actually the point of this film. Was it a careless misstep in approach, or, with the circus that surrounded the Gucci name, was the balls to the wall formula the best way to tell this story? Whatever the reason, like Italian fashion designer Elsa Schiaparelli once said, “fashion is always outrageous.” If that’s the case, House of Gucci is categorically and undeniably chic.

It's Thanksgiving - Time to Say Thank You