Jordan Peele’s debut film, Get Out, might be an achievement he never gets out from under. A modern-day horror masterpiece, Get Out is one of the single best directorial introductions of the 21st century. The movie would go on to receive Oscar nominations for Picture, Director, and Actor (Daniel Kaluuya). Peele won for his incredible Original Screenplay – becoming the first African American to win the Academy Award in this category. When something like this happens, the director’s subsequent films are often held to the same lofty expectations of their breakthrough work. Fair or unfair, this creates quite an obstacle for the rest of the director’s career.

Think back to 1999, when M. Night Shyamalan burst onto the scene with The Sixth Sense. Shyamalan was hailed as the new Alfred Hitchcock at the time, only to never quite live up to such towering accolades despite solid future entries like Unbreakable, Signs, The Village, and Split. Another example might be Neil Blomkamp, whose District 9 instantly became a visionary, sci-fi classic, only to see his future work – Elysium and Chappie – fail to live up to the hype. It is not that uncommon a thing, honestly.

Peele’s second film, Us, might be a good example of how prodigies don’t often become masters of their craft – at least not immediately. While Us was ambitious and imaginative, it didn’t score quite so well with audiences as it did critics, who might have been intimidated to report back anything lukewarm following Get Out’s incredible reception. While a good film, Us felt drowned in the anticipation we had following Get Out. Again, fair or unfair, this is the bar that was set for Peele, just as it was Shyamalan, Blomkamp, and many others before him who found immediate success with their debut effort.

In Nope, his third film, Jordan Peele entrances audiences once again with his beguiling style. Peele’s approach to the extraordinary happening to the ordinary is the same principle on which directors like Steven Spielberg and Alfred Hitchcock built their careers. Nope is Peele’s most accessible, audience-friendly film to date, dealing less with heavy, social metaphors (aside from men exploiting animals for labor and entertainment) and going straight for the popcorn jugular.

Nope takes place on a horse ranch in rural California owned by OJ (Kaluuya) and his sister Emerald (Keke Palmer). OJ is struggling to keep the ranch in business following the untimely and mysterious death of his father (the great Keith David). He keeps the homestead afloat by selling off his prized horses to Ricky (Steven Yeun), a child actor turned showman. As a young actor, Ricky witnessed Gordy, a trained chimp, debilitate and murder his co-stars on-set. As OJ deals with the bereavement of losing his father, he is drawn to a curious unidentified object in the skies above his ranch. The siblings – with the help of an electronic store clerk (Brandon Perea) and a legendary cinematographer (Michael Wincott) – attempt to make a fortune by capturing this slippery and fleeting object in the sky on film. 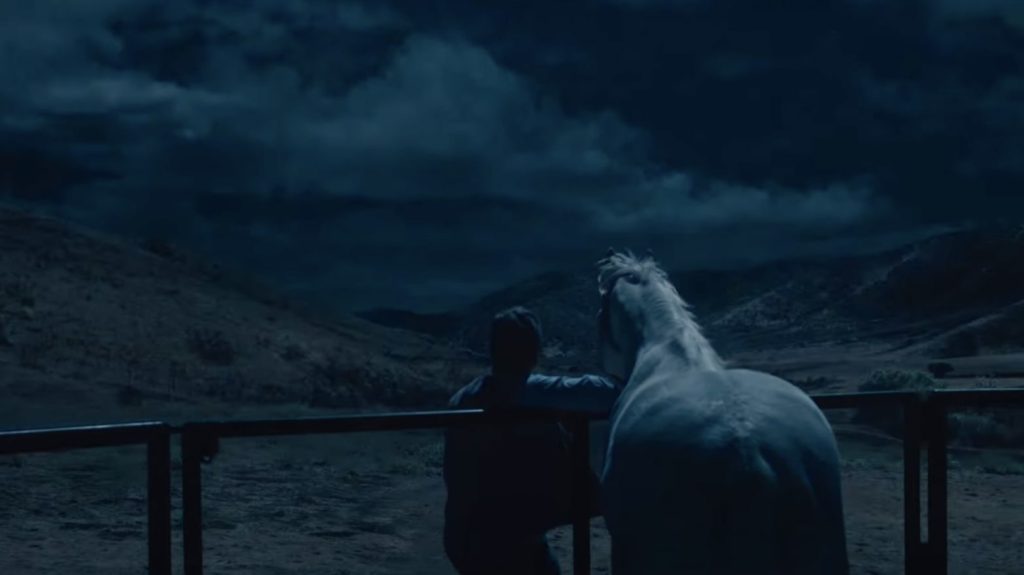 Nope is aptly crafted. Dazzling cinematography (Hoyte Van Hoytema), intense soundscape, first-rate production design (Ruth De Jong), and a heart-pounding score (Michael Abels) aid in the riveting effect the film has on its audience. Peele’s script unsurprisingly uses dry humor to cut moments of tension. This has become a staple of Peele’s films and when it works, it works well to engage and endear the audiences to his characters. When Peele overuses this approach, however, it can take away from the razor-sharp tension and deteriorate the scene.

Nope is at its best when it delivers tense, quiet moments: A brooding Kaluuya arches his neck to the side, standing in the middle of the desert road. He stares out at what appears to be a row of oncoming headlights. We watch his face grow from curiosity to suspicion to fear as he begins to realize things aren’t always what they seem. The hair on our neck stands straight up and our legs nervously begin to bounce in our seats as we wait for what comes next. That’s the magic of good filmmaking.

Nope is an entertaining flick that will take hold of audiences who are not looking for more than a good time at the theater. And while Get Out far exceeds his latest two films, there is clear and simmering talent behind the work of Jordan Peele. I enjoyed Nope for what it was and still believe Peele’s best film is yet to come.