We’ve come to final TIFF diary of 2022, chronicling the international features and documentaries, a fraction of the 25+ movies I saw during my time in Toronto.

What an extraordinary experience. One that has challenged me greatly but also come with an immense sense of joy and gratitude. My first time at TIFF has given me so many incredible memories. Never did I imagine that I would find myself in the same room as Steven Speilberg. Or at the world premieres of films destined to be modern classics. Thanks to talent Q&As and discussions with cohorts, I’ve also been given the opportunity to disect and engage with the films I saw in new and thoughtful ways. I’ve tried my best to relay those thoughts, with as much honesty and candor as I could, in these TIFF diaries.

Attending TIFF was something I put on my bucket list years ago. The silly dream of a movie-obsessed pre-teen. But as I said before, it is going to take some time to fully process the fact that the dream actually came true, to take stock of all that this festival has given me. It was everything I wanted it to be and so much more. And I can’t wait to do it again.

My colleagues Joey and Megan have recounted their In Her Hands stories, so *insert voice over here* this is how I ended up in the same room with Hillary and Chelsea Clinton. As I mentioned in my first diary, the early days of TIFF were extremely overwhelming. I walk into the TIFF Bell Lightbox Theatre for a press screening, and I might as well have been a directionless kid lost at the park. Then I see Megan’s strawberry blonde hair with Joey a few steps behind her, I just finish embracing them when I spot Awards Watch’s Erik Anderson, one of my favorite Oscar watchers and nicest people in our crazy “Film Twitter” bubble. There’s a special magic to spotting people you know in a crowd of strangers.

So even though we didn’t get into our original screening, I was already giddy, feeling my mind quiet for the first time in days as I sat down to watch In Her Hands. Then the TIFF organizer introduces the Clintons. What? I think I audibly gasp, “Is this real? more than once. The whole thing remains a blur, but I do remember Secretary Clinton’s remark that In Her Hands was vital viewing because it captured Zarifa Ghafari story In her own words and shows some very harrowing footage of Afghanistan’s final days before the Taliban takeover. I wholeheartedly agree, and like Mrs. Clinton, I’m left wondering how these images were filmed.

Ghafari served as of one of Afghanistan’s youngest female mayors, and she makes for a fascinating subject. I don’t have many complaints about In Her Hands, but I do wish the film was longer. (I’ve already pre-ordered Ghafari’s autobiography out in October). I loved getting to know Ghafari, and I think In Her Hands does an extremely good job bringing us into her world, especially when you consider the turbulent circumstances surrounding Ghafari the moment she took office, facing opposition from male counterparts, some constituents, and persistent threats from the Taliban to step down or be with violence.

In Her Hands showcases Ghafari’s bravery and resilience, but the documentary also allows us to see Ghafari as a daughter, a sister, as a giddy 26-year-old in love and being fitted for her wedding dress. The documentary also introduces the perspective of Ghafari’s longtime bodyguard (among others), adding to the richness of the storytelling. We see the sacrifices Ghafari and those closest to her have had to make, and we see the good Ghafari tries to do with that terrifying spotlight—fight for the women and girls of Afghanistan to have the right to continued education. That’s the great power and takeaway of In Her Hands—a vivid reminder of the plight of Afghan people and the women who continue to face persecution.

I grew up a stone’s throw from the Johnson Space Center in Houston, so anything NASA-related is automatically destined to capture my heart. Good Night Oppy was exacting what my inner space nerd needed.

Good Night Oppy follows NASA’s Opportunity rover, sweetly nicknamed “Oppy” by its human handlers launched in 2003 for what was supposed to be a short 90 mission to analyze Mars’ soil and water supply. Oppy’s voyage lasted 15 years. Ryan White’s documentary uses a blend of archival footage, interviews, and visual effects to tell Oppy’s story and visually render the red planet. I especially loved seeing the unique parent-child like attachment the NASA operatives formed with Oppy and the pride they took in seeing their little creation succeed and exceed expectations.

Good Night Oppy is a charming and sentimental addition to the space documentary genre.

Other People’s Children follows Rachel (Virginie Efira) as a 40-year-old woman whose new romance with a single father ignites a new desire to have children.

During the post-screening discussion, director Rebecca Zlotowski said she was inspired to make Other People’s Children after a former romantic relationship and role as a bonus parent caused her to reevaluate her stance on motherhood. Those deeply personal threads run throughout the film as Rachel grapples with her growing attachment to the new little girl in her life.

Zlotowski mentioned that she wanted to challenge the “wicked stepmother” trope, and she does so beautifully. The relationship and blossoming bond between Rachel and 4-year-old Leila (Callie Ferreira-Goncalves) is the highlight of the film, and it really is something you don’t see on-screen very often—someone caring for their partner’s child as their own with genuine compassion and tenderness of a mother without a formal title. I appreciated Other People’s Children’s willingness to wade into those sticky, often glossed-over areas of step-parenthood. The joy and heartache of not just loving one person but two.

I saw so much of myself in Rachel, I think any person who has ever been a stepparent or questioned whether or not to have kids will appreciate how Other People’s Children brings these questions to the forefront. Much of the credit belongs to Efira, delivering one of my favorite performances of the festival. Her work is so natural and vulnerable that you can’t help but want to follow her and empathize as she struggles to carve out a place for herself in this fragile family dynamic.

The story wraps up somewhat abruptly, and the conclusion doesn’t ring as “true” as the rest of the film, but I’m willing to forgive Other People’s Children because I found everything else so smart and engrossing. I’ll be chewing on this one for a while.

Like Other People’s Children, Broker is another TIFF movie I can’t shake.

My very first Hirokazu Kore-eda film was 2016’s After The Storm, (which was also the very first film I reviewed as accredited press at a film festival), and I’ve been enthralled with the Japanese auteur ever since. Kore-eda’s film are always must-watch projects for me, and Broker is no different.

Broker is Kore-eda’s first South Korean film, but still retains much of the filmmaker’s visual and thematic DNA—a slow-burn that examines found family, class, abandonment, and dueling definitions of justice. The film follows a young mother (Lee Ji-eun) who leaves behind her infant in a designated “baby box,” the brokers (Song Kang-ho and Gang Dong-won) who take the baby and attempt to sell him, and the detectives (Bae Doona) and her colleague (Lee Joo-young) on their trail.

Each character has a secret, and Kore-eda takes his time revealing them, fleshing out each perspective and setting up for a collision course with reverberating consequences. A thoughtful, endearing film from a cinematic titan.

Newly-minted Emmy winner Lee Jung-jae makes his directorial debut with this 1980s-set drama that begins with the attempted assassination of the South Korean president. Lee stars as an agent attempting to uncover a conspiracy and find the mole leaking secrets.

Hunt begins as an intriguing political thriller but soon devolves into a convoluted mess of gratuitous blood, bullets, and explosions, completely descending into madness in the third act. The script, co-written by Lee does the director no favors in his attempt to put together a stylish first feature.

Hunt may appeal to some who enjoy the over-the-top action genre, but for me, it’s Lee’s work in front of the camera that remains the most intriguing.

If you’ve made it to the end of this diary, here is where I say my thank yous. To everyone at TIFF for orchestrating an incredible festival. And to my editors at Awards Daily, who first opened the doors that made this possible.

Thank you to my friends and family who answered my anxiety-riddled texts with kindness and encouragement. And above all, thank you to my family in Toronto, my Khaleh (aunt) Farangis, and cousin Roksana, in particular, whose help made it possible for me to attend the festival. I was lucky enough to stay in my cousin’s downtown apartment for my ten days at TIFF, and ending the night at a place that felt warm and comfortable, like a second home, made all the difference. I’m so lucky to have people in my life who are willing and able to do such exceedingly kind and selfless things for me.

I’m now settled comfortably in my aunt’s house in the suburbs of Toronto, where I’ll spend the next week before heading off again. I’ve spent my entire life isolated from my extended family, so the role of spoiled and adored niece is not one I’ve been permitted to play very often. I’m going to revel in it as much as I can. I’ve got tickets to Barbarian and Don’t Worry Darling and a copy of Miriam Toews’ Women Talking waiting for me. And hopefully some good poutine and Persian ice cream too! 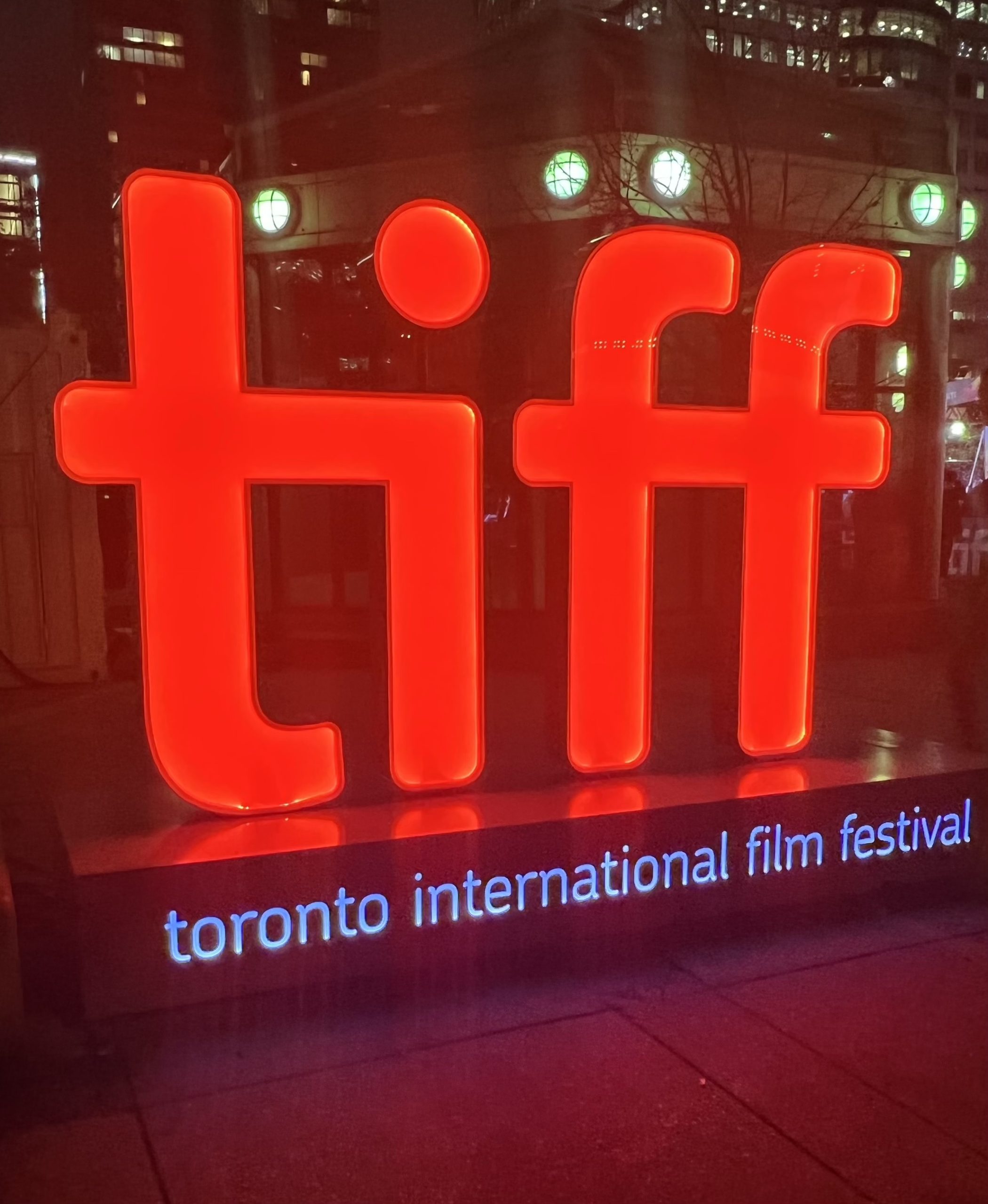 Crossing all fingers and toes that this is the first of many TIFF adventures to come! Thank you all for following along on this wildest of rides.