The Directors Guild did the impossible by acknowledging Joseph Kosinksi’s brilliant work in Top Gun: Maverick. It might not be the favorite of film critics or the bloggerati, but it’s most definitely The Movie of the Year for a good many people, and very likely the only movie most people will remember from 2022. The DGA is showing that they still have one foot in the real world, while the awards race just gets smaller and smaller every year. It is more and more insular with more naval gazing, but the idea is still to make movies that people watch.

In no universe should Top Gun: Maverick be left off the list for any of the major awards. Tom Cruise should have gotten in with this morning’s SAG nominees for Best Actor. He didn’t. That’s fine. The Directors Guild showed that the movie industry isn’t going to completely turn their back on the public.

Much will be made of the fact that no women are in the DGA’s lineup. It’s extremely difficult to get in the DGA and voters have to be urged to align around one woman if they want to get any in. Even when everyone aligns around one woman it’s still hard to get in: ask Ava DuVernay or Kathryn Bigelow back in 2012. Yes, we recently had a year where there were two women in Best Director. But that was 2020 and it was a strange year overall. In general, it still takes a village to make that happen.

This year, the critics have rallied more around Charlotte Wells and Aftersun, not Sarah Polley and Women Talking. The former is more likely in for Best Director, the latter more likely in for Best Picture. But they can’t just scream about no women being in the race. There has to be a concerted effort, especially at a time such as this, to rally behind ONE woman, IMO. Also garnering well-deserved attention are Gina Prince-Bythewood for The Woman King ad Maria Schrader for She Said.

Hollywood is having a hard time as it is holding onto audiences, making money at the box office. All of these factors are playing into how voters are voting. They can’t really afford to worry as much about the activism side of film awards. They have to also think about the commercial side.

Best Picture often wins without a lead-acting win. Nomadland, The King’s Speech, and The Artist are the only recent exceptions. They like to spread the wealth with the big awards. Not always, of course, but often. So if Cate Blanchett is going to win in lead, that makes it more likely Everything Everywhere could win Best Picture. If Colin Farrell wins for Banshees, that may make it less likely for the film to win. That Michelle Williams isn’t in for The Fabelmans might mean that film has a better chance to win.

These aren’t hard and fast rules. They can be broken at any given time. But that’s just how things seem to have gone lately. 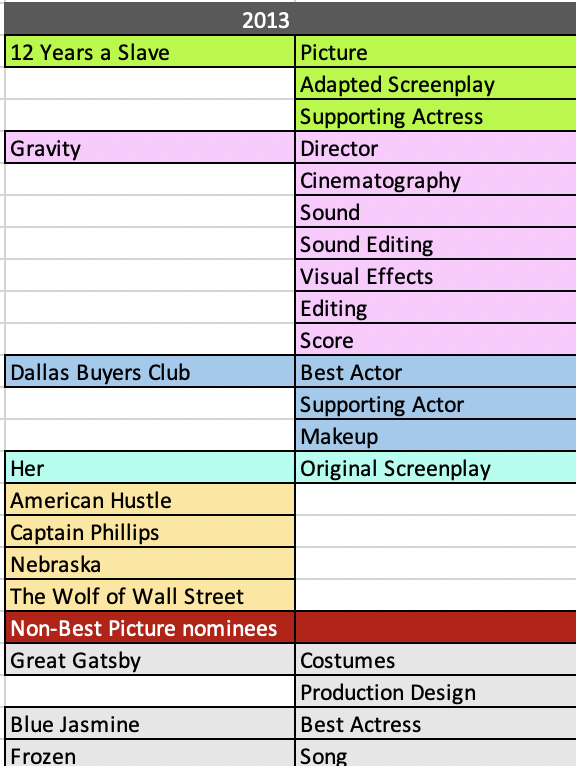 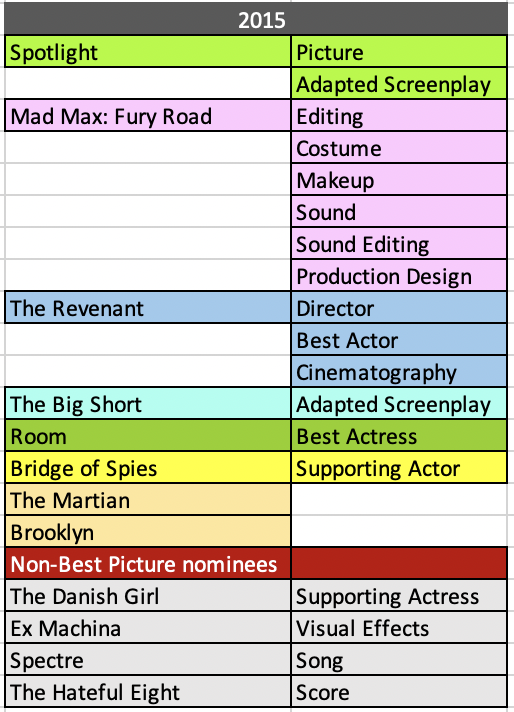 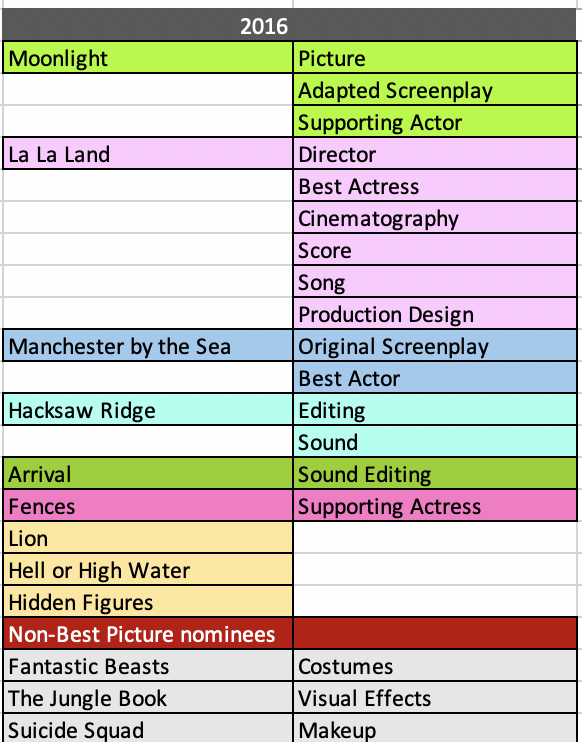 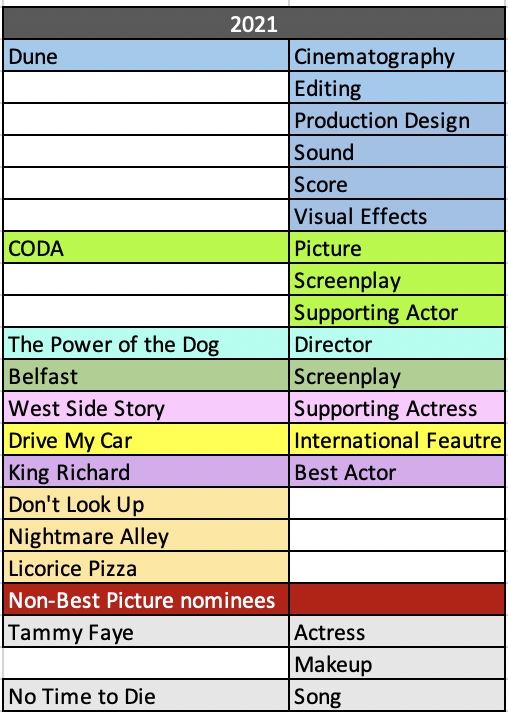 The first year of the expanded ballot is the only year that looks like how the Oscars used to: 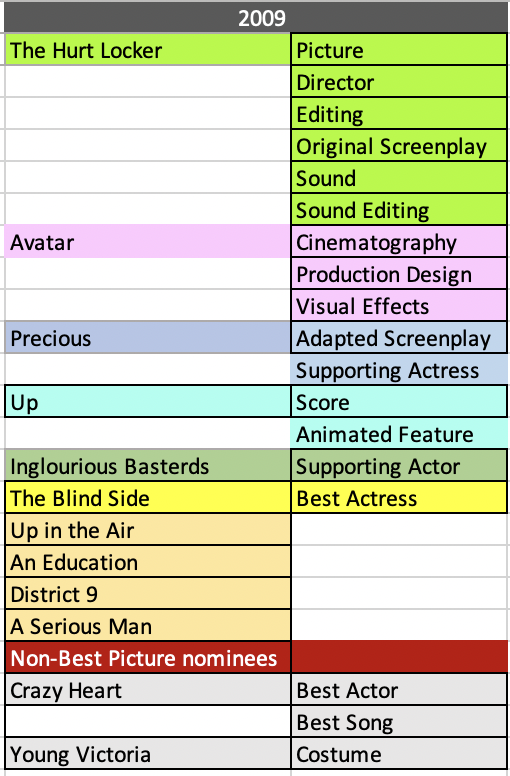 If they want to save themselves from the ruination of obscurity, the Academy will go back to five Best Picture nominees and start building up some power again. I don’t think that’s happening. I think they’ll go to a streaming platform like SAG just announced it was doing. That way they can serve their own small niche without the embarrassment of bad ratings or slumping box office. But either way, having more contenders dilutes the power of the Best Picture champion, in my opinion. Best Picture is almost an afterthought.

Let’s talk about what we know. All five DGA nominees will get into Best Picture. Only once in the era of the expanded ballot did the DGA five not make and that was the Girl with the Dragon Tattoo, much to my own personal horror. Otherwise, those five are in. We already knew that, but just for the hell of it:

Everything Everywhere All at Once
The Banshees of Inisherin
The Fabelmans
Top Gun: Maverick
Tár

Then, according to my charts, a film that shows up in the AFI, NBR, Globe, and Critics Choice lands a nod (with Inside Llewyn Davis, Mary Poppins Returns and If Beale Street Could Talk as the only exceptions):

Avatar: The Way of Water

In general, with a few notable exceptions, having both the Critics Choice and the SAG ensemble can lead to a Best Pic nomination. Not always, of course, but often. So then we have:

Next, we get Golden Globes + Critics Choice:

Finally, here is the BAFTA long list:
Aftersun
All Quiet on the Western Front
The Banshees of Inisherin
Elvis
Everything Everywhere All at Once
The Fabelmans
Living
Tár
Top Gun: Maverick
Triangle of Sadness

That leaves us with one last slot. You can decide what you think that will be. Given its strong showing at BAFTA, I would guess it’s All Quiet on the Western Front. But it could be anything. I think The Woman King and Black Panther are likely canceling each other out, but that wouldn’t be a factor with the preferential ballot. That means one or the other is likely to get in. Aftersun might get in, or any title from BAFTA’s long list.

Will the Producers Guild clarify anything? Not necessarily. They’ve almost always miss at least one.

Regarding winners, 6/13 times since 2009 the winner came from the Golden Globes. That means it would either be The Fabelmans or The Banshees of Inisherin.

When you fold in the Toronto People’s Choice Award to figure out which films won both Toronto and the Globe, you get these six films since 2000:

From a stats perspective, this seems to give The Fabelmans the edge. But again, it’s too early to say one way or the other.

The Critics Choice very likely will pick Everything, Everywhere All at Once. That seems to be the more “Film Twitter” + critics-friendly film. How do they stack up with wins? 7/13 times.

Similarly, when you pair the SAG ensemble with DGA you always get a winner:

The only films that won the National Board of Review and the Oscar was Green Book. That seems to indicate Top Gun: Maverick is a long shot pick.

Finally, no movie has come from nowhere and won Best Picture. It had to win one of these precursors first.

None of the categories have a clear frontrunner. It’s going to come down to speeches, buzz, and the way the wind blows. Tomorrow, the Producers Guild will add to the mix, and by the weekend, we’ll get a whole new batch of winners when the Critics Choice Awards hold their ceremony.

Because of last year’s surprise winner, CODA, it isn’t wise to get too bogged down in our certainty at the moment. I think the internet is all in for Everything, Everywhere All at Once and I could see that winning. I could see The Fabelmans winning and I could see The Banshees of Inisherin winning. Top Gun would have a harder climb because of the acting branch which dominates the Academy.

In general, though, Best Picture goes with Director OR Screenplay, rarely both:

And there you have it. We’ll follow up with tomorrow’s announcement of the PGA, if anything changes.

The Directors Guild of America today announced the nominees for Outstanding Directorial Achievement in Documentary Feature, Television, and Commercials for...

The DGA, along with the PGA and the SAG (y tho) are also announcing their nominations on Wednesday. Here is...