Shelly finally connects with her children in the over-the-top, musical extravaganza!

Transparent has always played by its own rules and the finale–or the Musicale Finale–is a prime example of that. It’s been a while since we have spent time with the Pfeffermans, but Jill Soloway’s comedy series about love, openness, family, and identity comes to an end on its own terms. At the heart of Transparent Musicale Finale is Judith Light’s Shelly, a woman who has failed to connect with her children as each member of the family finds his or her own way. Light’s performance is hilarious, grounded, tragic, and heartwarming all at once. No one can mix up emotions like Judith Light.

Halfway through the film, Light gives us a showstopping performance in “Your Boundary Is My Trigger,” an over-the-top condemnation of how no one understands what it’s like to be a mother whose children insist on leaving the nest. Sarah, Ari, and Josh have always had trouble truly connecting with their mother, and Light’s performance is full of heartbreak and anger.

No family is perfect, but the Pfeffermans might find a more honest place after the death of Maura. Like any good musical does, it forces its characters to confront feelings they didn’t know they had bubbling inside them. I am truly going to miss Shelly Pfefferman’s eagerness to please and her journey to honestly love herself.

Awards Daily: What did you think when you found out that the finale of Transparent was going to be this massive, no-holds-barred musical?

Judith Light: I thought what else would Jill Soloway do? What would her and her sibling, Faith, do to move us to the conclusion of a show that was so extraordinary for so many years. It wasn’t surprising. There was always this idea that Transparent could be a musical. There was music in the pilot. Josh is a music producer. You have Shelly singing on the ship at the end of the third season. There’s music all the way through the Pfeffermans. To have this be the Musicale Finale, it was not a surprise. Mind you, what it was going to entail, we knew that it was going to be a lot. It was a truly joyous experience. Certainly one of the best of my career, but definitely one of the best of my life.

AD: I remember that my musical theatre professors always told me that the reason why characters sing in musicals is because the stakes are so high that there is no other way to express emotion. That’s why there’s singing.

AD: And if any family on television had to sing their emotions, it would be the Pfeffermans.

JL: For sure. That’s the perfect way to put it. Jill said that to us, too. If they can no longer speak, they must sing. If they no longer can sing, they must move and they must dance.

AD: At the beginning, we learn that Maura has passed, and Sarah, Ari, and Josh feel connected in their grief as siblings. They won’t let Shelly in. Can you tell me how alone she must feel at the start of all this?

JL: She’s very alone. Remember that Shelly has always felt this way throughout the entire time through Transparent. I’ve often said that her attempts to be included, which is what she has always been longing to do. There’s no one that has known less how to include herself with other people than Shelly.

JL: Her longing to be included and not be alone, she simply doesn’t know how to relate. We see that in her self-involvement and narcissism. Until this particular time, there’s a Shelly who is all about herself. Which that is also funny and we all know is part of the human condition. There is a shift this time.

AD: I want to talk about “Your Boundary is My Trigger.”

AD: I am a bit obsessed with that song and how it’s presented to us. I love the lighting—the set feels like something out of Next to Normal.

AD: The dancing is so strange and fun. Lesli Margherita is behind you for a lot of it, and she’s making these huge faces.

AD: Yeah, she’s so great in that song.

AD: Some of the lyrics really jumped out at me like “I hear neglect is far worse for us than abuse” and then “We all blame the mother.” Talk to me about that huge song.

JL: We worked on it a lot. Ryan Heffington, our choreographer, and Jill and Faith were all one working on it. I had done a little prerecord the November before. We did more December of 2018. In January of 2019, we came back and that first week we had rehearsals, and we worked on it again. We shot the show in a month.

JL: We knew we needed time on that number outside of the conception with how Jill knew it was going to be. You’re so right on about the Next to Normal set. I can’t remember the exact phrase that we used for it. Whether it was the magic set or the make-believe set or something. We knew that part of it would take place in the synagogue in the rec room and then it would move to the stage. We were doing it in pieces. I remember the day that we actually did it. Jill and I did this interview together the other day, and I believe she said that we did it for 12 hours straight.

JL: There were breaks, of course, but we were this team. An incredible group of dancers and singers. There was this collective energy and togetherness. Everyone was supporting each other. We just kept doing it over and over and over again. It was exhilarating. It was thrilling. I am incredibly grateful for Jill and Faith for giving me that kind of number.

AD: Shelly has always been a woman who has laid her emotions out, but this feels different because it is so heightened.

JL: I’m so glad you feel that way because of all the people that made that happen. It takes more than a village. There are moments that carry that kind of weight. The opening, “Sepulveda Boulevard,” that Amy [Landecker] sings, and Josh [Duplass] and Kathryn Hahn have these beautiful moments together. That beautiful moment with Shakina Nayfack where she sings “Your Shoes” to Shelly. They’re all powerful moments but they are all different.

AD: You have a lot of beautiful moments with Shakina. Even when she comes into the rec room for the first time.

AD: And she puts on that outfit. You see her as Maura. That look on your face is so striking. How does Ava help Shelly with Maura’s death?

JL: There is a quality of…is this person real or has she come to earth for this moment of time to move the family through the pain? In Shakina’s performance, you can feel her spirit and her soul. Her transness is her gift. She is the transition from so many things. From pain and sorrow to peace and love and beauty. It’s a paradox because, in a sense, the otherworldly quality of her that you can feel when you watch it. I think the Pfeffermans feel that, too. That look on Shelly’s face comes from Jill’s guidance that led me to that moment. 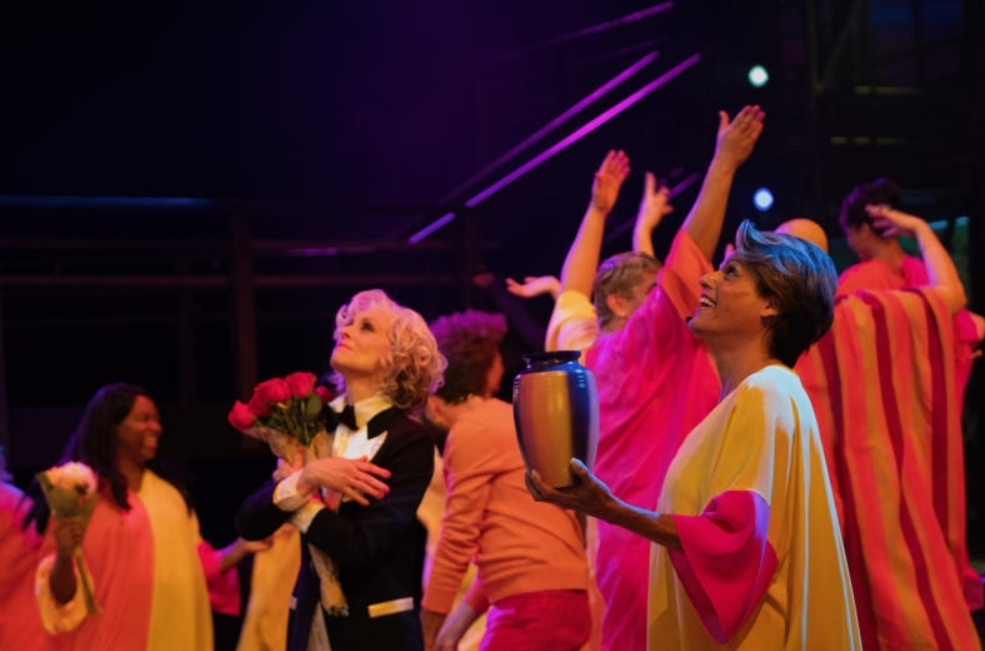 AD: The ending of the film is really powerful. You are able to connect with each one of your children, and you don’t even need to really say anything. You’re simply holding your arms out to them and letting them know that it’s okay.

JL: It feels wonderful and complete. It is the transformation of a woman only thinking about herself to her thinking of someone else. All of that came from Jill. Jill’s creation of that scene and the direction of the scene—you got it all. You spoke to what Jill was speaking to us about that moment. As human beings, it isn’t until we know we can operate differently, that we get a different result. For so long, Shelly was at everyone to include and was “gimme this and gimme that.” That moment is the realization and the transformation—not the change—of a human being when they realize what they have been truly doing to not connect with other people. It’s the thing we all recognize and long for and know we could have if we transform our thoughts. That’s what you’re seeing in that moment.

AD: I have to ask about that closing number.

AD: It’s really the embodiment of what Transparent has been the whole time which is colorful and joyous and big. I like that even some of the lyrics point out that maybe it’s a bit controversial. What was it like to have such a groundbreaking and beautiful show end with a song like “Joyocaust”?

JL: It seems very in alignment with what Jill held as the context of the show. These very connected, messy, loud, emotional, skirting-the-line, maybe-going-too-far moments. And the song and the movement of it tells you everything about what the show was and what the show will be in perpetuity. It seems that’s what Jill was speaking to, pointing at, and saying with Faith. They’ve worked on a lot of different theater and musicals and that’s always the heart and soul of their relating. For this, it was the perfect ending for what they always thought about and what they conceived.