Will the ‘Hamilton’ Cast Enter the Emmy Race?

Our friend Scott Feinberg originally posted this story over at The Hollywood Reporter. It seems as if the never-dying question of Hamilton‘s awards eligibility continues into the Emmy cycle. As you all know, the original cast of the Tony-winning musical filmed multiple performances with inserts of close-up facial reactions for a Disney theatrical release in October 2021. On the advent of Disney+ and COVID-19, Disney decided to accelerate that release and air it on Disney+ starting July 3, 2020.

That move made it eligible for a host of awards, including Golden Globes, SAG, and the 2021 Emmy Awards, where it will likely compete in the Variety Special (pre-recorded) category and in the Limited Series or Movie performance categories.

The question has always been exactly how Emmy eligible the production would be. Disney chose to submit Hamilton in the Variety Special (pre-recorded) category. According to Television Academy rules, performances from a Variety Special (pre-recorded) are only eligible if they are considered the host/primary performance. That would make only Lin-Manuel Miranda eligible for an Emmy Award.

The exact text people state in referring to this rule is as follows:

But, according to Feinberg’s reporting, to determine Hamilton‘s cast Emmy eligibility, the Television Academy applies a minimum 75-minute rule to determine if the performances were eligible. Feinberg quotes a TV Academy spokesman in the piece. 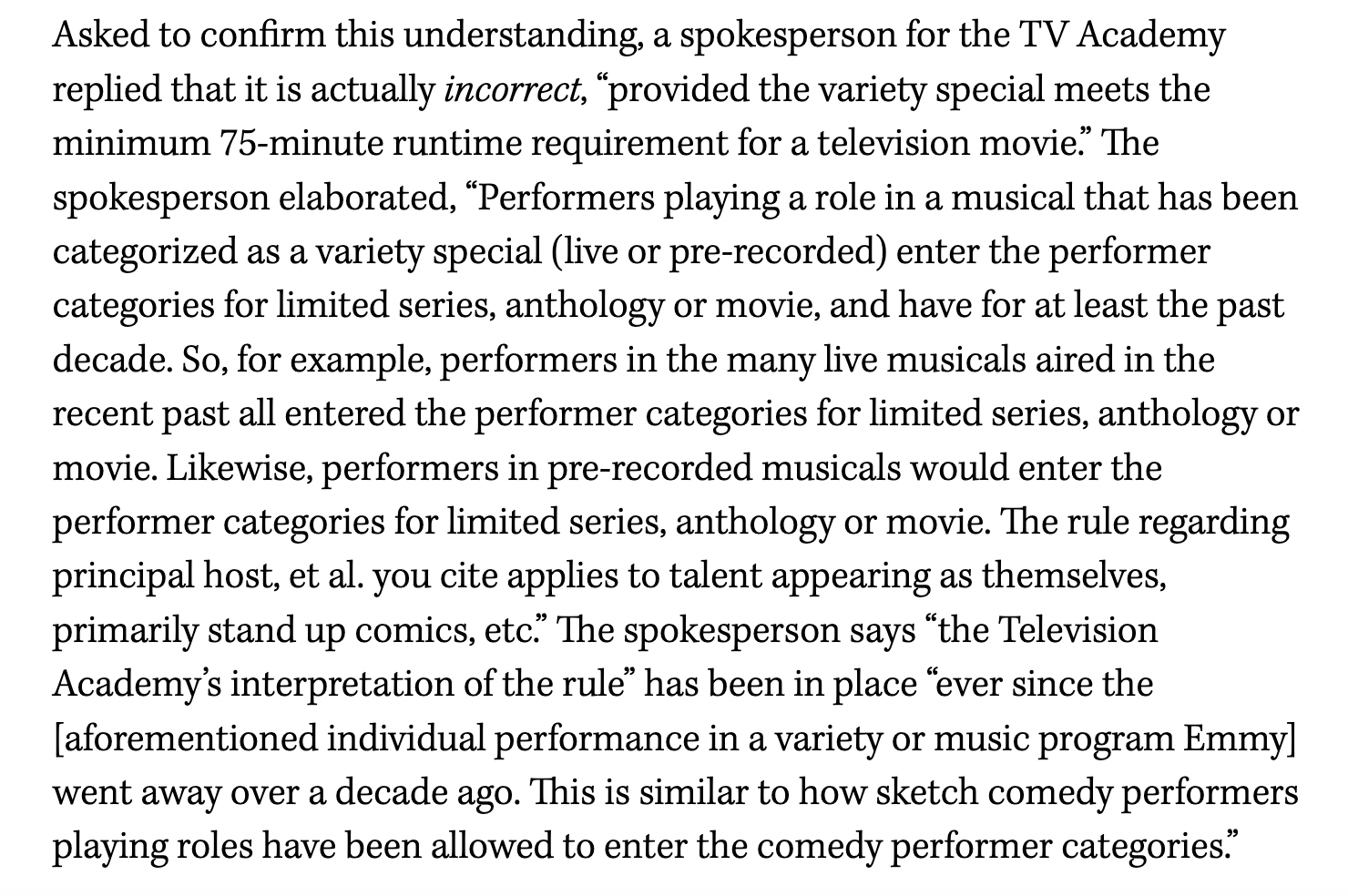 This begs the question, “Why didn’t Disney submit Hamilton as a TV movie?” It’s over 75 minutes. It has competed elsewhere as a film. Additionally, that would make its cast free and clear to compete for Emmy nominations. Well, there’s ANOTHER Television Academy rule that says essentially if a Broadway play was filmed then it has to compete in the Variety Special (Live) or Variety Special (Pre-recorded) categories.

That’s what happened with NBC’s Jesus Christ Superstar: Live in Concert, which received 13 nominations and won five awards in the Creative Arts categories. That production, however, was produced explicitly for television. It was not merely a filmed theatrical experience. Another comparison to consider is PBS’s Sweeney Todd: The Demon Barber of Fleet Street. That production received the Emmy Award for Variety Special (Live) (then known as Outstanding Special Class Program).

So, the question comes down to whether or not the mere event of being pre-recorded makes it questionable that Hamilton‘s cast is fully eligible for 2021 Emmy nominations. It’s a slippery slope for sure, and, according to Feinberg, many rivals are (privately) complaining about the Television Academy’s interpretation of their rules.

But what exactly are the chances that the cast actually receives Emmy nominations?

Competition in the Limited Series races remains extraordinarily tight this year, as with previous years. The Underground Railroad, The Queen’s Gambit, Mare of Easttown, Small Axe, I May Destroy You, WandaVision, Genius: Aretha, The Undoing, The Good Lord Bird, Romeo & Juliet are all in contention for nominations this year. Those series boast heavy, star-studded casts.

Yes, Hamilton‘s original main cast all received Tony nominations on Broadway for their extraordinary performances. Three of them received Tonys, but there is a sense that Hamilton is not as strong now as it was in 2016. We are a very different nation than we were then. We were under the glow of the Obama administration. Then, Trump happened, and division, sarcasm, and hatred became the rule of the day. Gone was the idealistic love that, I think, made Hamilton such a breath of fresh air. Now, it feels like a tainted relic of another era. That doesn’t mean people don’t still love it, but it’s not on the lips of, say, awards voting bodies as it once was.

Hamilton, the recorded performance, did have a strong presence in the guild awards season. It received awards from the Cinema Audio Society, the Costume Designers Guild, the Make-Up Artists and Hair Stylists Guild, and the Producers Guild. It received a nomination for Thomas Kail’s direction at the Directors Guild of America as well as other nominations from various groups.

But the performances from the recorded version have yet to receive a win. Of the major awards groups, here are the tally of nominations (again, no wins):

So the women of Hamilton — Tony winner Renée Elise Goldsberry and Tony nominee Phillipa Too — have been completely ignored on the awards scene for the recorded version of Hamilton. Forget them for an Emmy attention, although I would argue that Goldsberry gives one of the strongest performances in the show. I mean, how do you decide between Odom Jr and Diggs and Goldsberry? They all won Tonys. They’re all perfect in their roles. And then there’s Jonathan Groff and Christopher Jackson, both great in smaller roles. Yes, Sara Bareilles received a surprise nomination for Jesus Christ Superstar, so it’s not out of the question that Goldsberry rates here too. But 2018’s Emmy year was not 2021’s Emmy year. This year’s competition is tougher, and it’s not entirely clear exactly how many nomination slots we’ll have. We’ll have to count the number of eligible performances to determine if we meet the threshold for a larger number of nominees.

Emmy nominations are more likely to come from, in order of likelihood, Daveed Diggs, Lin-Manuel Miranda, or Leslie Odom Jr. Odom Jr., who beat Miranda at the Tony Awards for Best Actor, oddly fell down the ranks in nomination probability despite giving the very best performance, in my opinion, in the show. That’s probably because he hasn’t been as known of a performer as Diggs (heavily featured for several years on black-ish) or Miranda (an inescapable presence).

So, at the end of the day, we’re probably looking at only a single performance nomination in the Lead Actor in a Limited Series or Movie race. That particular race is very weak this year with no readily obvious front-runner. Many are touting Ethan Hawke for The Good Lord Bird, and he’s certainly making the runs to support his work. Yet, that aired way back in November to a somewhat muted response. Some thought Ewan McGregor would be a shoe-in for Halston, but literally no one is talking about that series, although he’s great in it.

So, who knows, perhaps an actor from Hamilton could even win. Perhaps the Television Academy could even nominate multiple performances from the recorded production. It feels unlikely to me right now. Let’s see who sits on the ballot when they’re made available on Thursday. Television Academy voters notoriously vote on name recognition, citing too much television to watch. Well, maybe that’s true in other years, but given the isolation of the COVID-19 pandemic, people have no excuse not to watch more series than normal.

And we know that Hamilton, available since July 3, has been seen by nearly everyone with access to Disney+.

Is an upset in the making? We’re watching, and we’ll see come July 13 when the 2021 Emmy nominations are announced.