How Venice, Telluride, and Toronto Impact the Oscar Race

by Mark Johnson
in featured, Good As Gold
14

With Venice, Telluride, and Toronto behind us, we are knee-deep in the festival season. Movies have been seen. Audiences have been wowed. Studios are jockeying for position. The race for Oscar becomes one iota clearer. Odds are the eventual Best Picture winner has played at one (or more) of these festivals. The last 14 films to take the top honor have partaken in at least one of the Venice-Telluride-Toronto trio. You have to go back to Martin Scorsese’s The Departed (2006) to find the last Best Picture winner to pass on this launching pad. It is also a bonus to have your world premiere at one of the big three festivals: in the past 11 years, only The Artist and Parasite debuted prior to these galas and still won the Oscar (Cannes).

That being said, strange times are these in which we live, to paraphrase my fellow Greek, Plato. With the resurgence of COVID and all of its variants, the extended Oscar race (March 27th this year), and all of the other x-factors that seem to pop-up every other day or two, might we see a break in tradition? After all, a stat is a stat until it’s not.

Phase one of the race goes to Kenneth Branagh’s astounding and poignant memoir, Belfast. Playing at both Telluride and Toronto, the film has received praise from critics and audiences alike. Belfast is excellently written, directed, and acted, and is paced refreshingly well (clocking in at a brisk 97 minutes). Branagh’s masterpiece is chock-full of emotion – tender, lighthearted, and nostalgic – hitting all the right notes as it checks every box necessary when surveying the Oscar tea leaves. In short, does it have the potential to be recognized by SAG? Check. PGA and DGA? Check, check. BAFTA? Check. Critical acclaim/crowd pleaser? Check. Can it endure the criticisms and takedowns that come with being an early front-runner? I believe so. It’s the type of film to garner plenty of number one votes on the preferential ballot. It would have mine… at least for now.

Since 1978, 18 of TIFF’s People’s Choice Award winners have gone on to become Best Picture nominees (12 of the last 13 winners have been nominated). Seven of those prize winners ultimately won Best Picture: Chariots of Fire, American Beauty, Slumdog Millionaire, The King’s Speech, 12 Years a Slave, Green Book, and Nomadland. On Saturday, TIFF announced Belfast to be this year’s recipient of their People’s Choice Award. It is clearly out front at the moment. 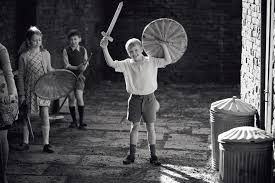 The Power of the Dog is another strong performer, as Jane Campion took home the Silver Lion (Best Director) at Venice. Campion became just the second female director to win this prestigious award, and follows in the footsteps of other female directors to be recognized for their work this year (Chloe Zhao – Oscar for Best Picture/Director for Nomadland; Julia Ducournau – Palme d’Or for Titane). This is likely just the first in a long line of prizes the New Zealand filmmaker will pick up on the awards circuit this year. Campion’s film, while stunning, is a bit foreboding and could prove divisive. The last of its kind to win Best Picture was probably No Country for Old Men (2007), two years before the return of the preferential ballot.

Other Best Picture hopefuls that played well at the early fests include King Richard, Cyrano, Dune, C’mon C’mon, Spencer, The Worst Person in the World, Petite Maman, Parallel Mothers, The Lost Daughter, and Official Competition, to name a few. Several of these films will feature some of our strongest contenders for acting nominations, including Will Smith (King Richard), Kristen Stewart (Spencer), Peter Dinklage (Cyrano), Penelope Cruz (Parallel Mothers), and Jessica Chastain (The Eyes of Tammy Faye). They join the entire cast of Belfast (Caitriona Balfe, Jamie Dornan, Ciaran Hinds, Judi Dench, and Jude Hill), and Benedict Cumberbatch, Kirsten Dunst, and Kodi Smit-McPhee from The Power of the Dog, to form an already formidable group of players.

Why does playing at these festivals impact the Oscar race so consistently?

For one, it establishes early loyalties and builds excitement through word of mouth. I am no psychologist, but after 13 years of covering the Oscar race, I know that many folks have a tendency to latch on to a film and pull for it all awards season. If an Academy member falls in love with a particular movie early on, might it become more difficult to vote for anything else by the time ballots are in hand?

The prestige of these festivals goes beyond just having the film seen early. It gives the chance for studios and publicists to get a jumpstart on their campaign. These campaigns kickoff in a welcoming and exciting environment like the picturesque mountain village of Telluride or the extravagant red carpets on the island of Lido in Venice. It’s often a soft landing for strong contenders to begin their march, and aids in the buzz and excitement that can sometimes put a candidate out front early on. They can often ride this momentum for the entire season.

Another reason the festival release matters is that it gives the film time to rise, settle, and rise again. Think back to 2012 when Argo first played at Telluride. It was instantly the frontrunner to win. Then, once its bubble had grown too big, there was an avalanche of historical inaccuracies and fabrications exposed about the film. Thanks to its early release – and perhaps embedding itself into the hearts of Academy members – Argo was able to bounce back in time to win the big prize. The slander might have been enough to cost Ben Affleck the Director nomination, but it wasn’t enough to stop the film from winning Best Picture.

Recent history shows that playing at Venice, Telluride, and/or Toronto will give a film and its cast and crew an early advantage. This is something our new frontrunner clearly understood, and quite possibly why Focus Features made sure to get Belfast at all three galas this year.

Check out my post Venice-Telluride-Toronto Oscar predictions here, at the Good As Gold landing page.