The Oscars used to be more reliant upon the free market: big stars used to drive the box office, and thus big stars often drove the Oscars. Take, for instance, the first year I covered the Oscars when Gladiator won Best Picture. Russell Crowe and Julia Roberts were huge stars who could open movies. Both won Oscars that year, and naturally, people would watch the Oscars. So far, so good.

Cut to 2022, and almost everything has changed. We do, however, have two films that were driven by their central male performances to box office success: Top Gun: Maverick with $700 million and Elvis, which made $150 million. By any measure, these are successful films at a time when box office is taking a pounding.

This is our year’s most successful movies so far from Box Office Mojo: 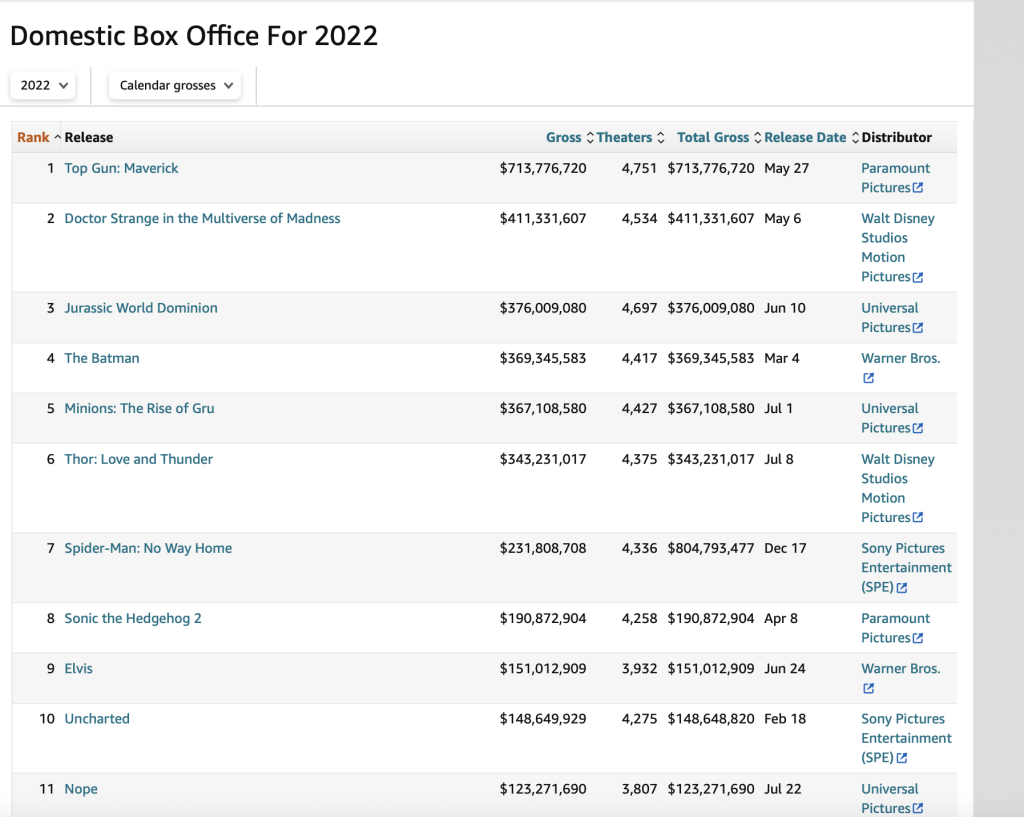 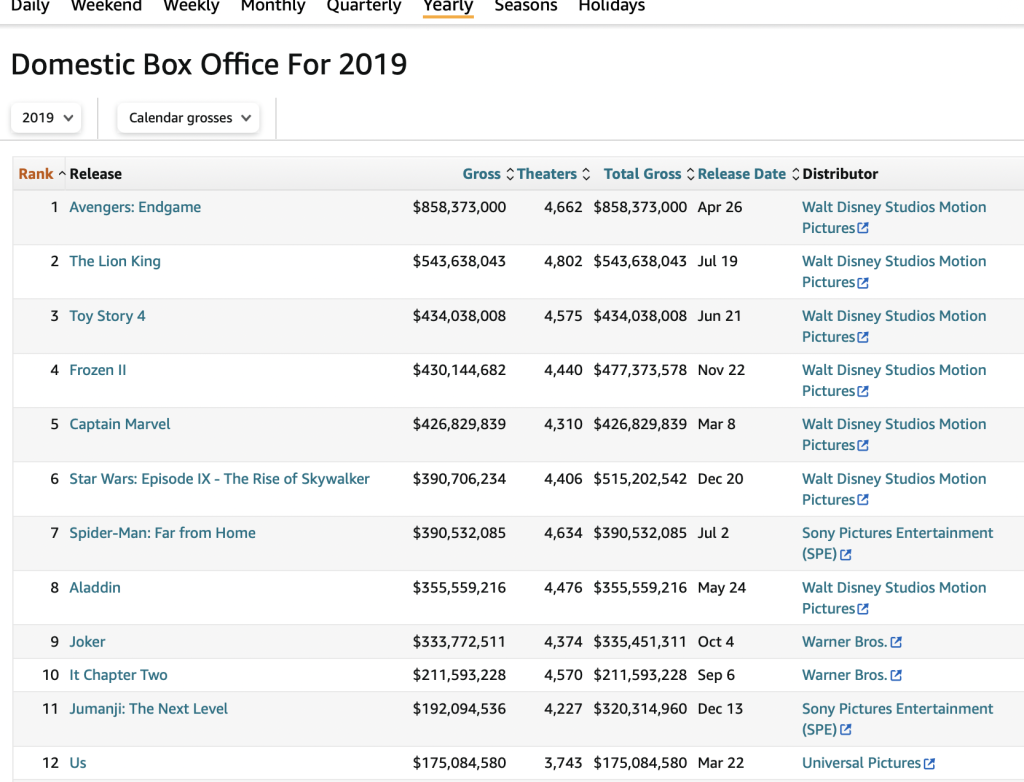 When we look at 2019, we see that spectacle drove the box office much more than celebrities. That is in keeping with what many have said about the film (and Oscar) industry of late: that celebrities have lost a lot of their power. It isn’t just that they’re on Instagram and social media, giving us way too much information about their lives. They seem to want to be “relatable,” but in so doing, that makes them more accessible to us. That means we’re less likely to want to pay to see them on the big screen.

When you look back at the all-time box office adjusted for inflation, what I see more than almost anything is spectacle. Gone With the Wind was to movies what World War I was to humanity: they’d never seen anything like it before. It changed everything. Titanic was spectacle, mixed with the rise of Leonardo DiCaprio. Jaws was spectacle. But that wasn’t the only reason people went. Clearly, “family entertainment” was and remains a big draw at the box office. As long as we have spectacle at the movies, we will have audiences, I figure. 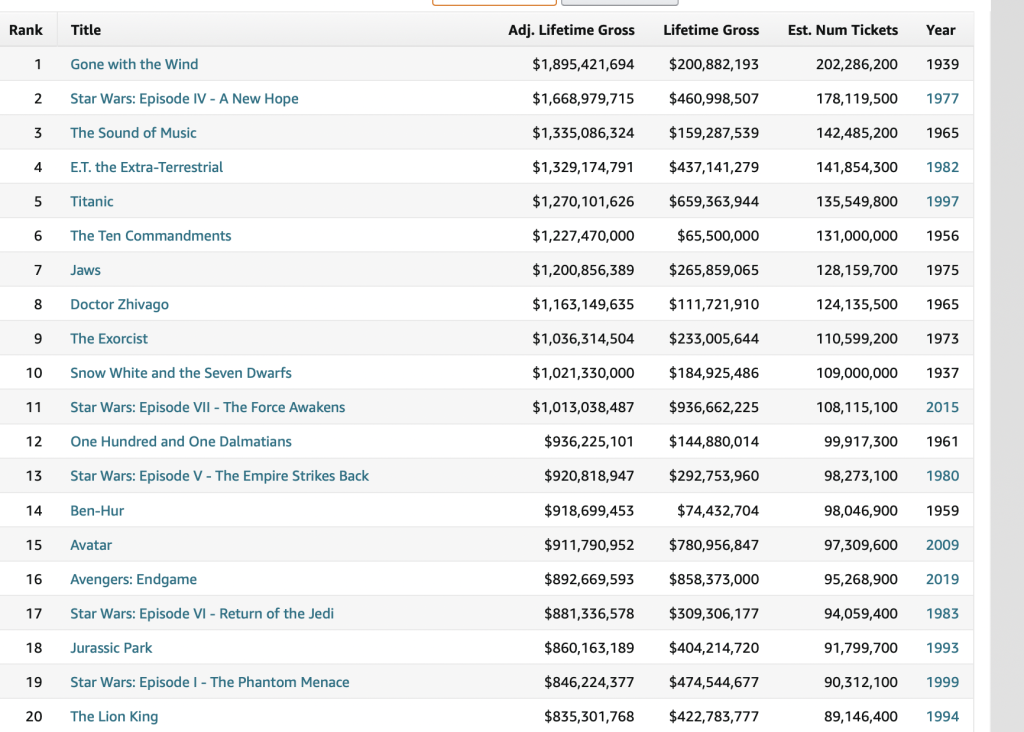 And speaking of spectacle, that surely propelled Everything Everywhere All At Once to its $68 million, maybe even The Woman King and, without a doubt, Jordan Peele’s Nope. It was an art movie that made $120 million. That’s kind of incredible.

The Best Actor winner doesn’t seem to predict the Best Picture winner, with two exceptions since 2009: Colin Firth for The King’s Speech and Jean Dujardin for The Artist. Otherwise, they split the prizes.

Those that won (since 1996) without a Best Picture nomination were:

That’s it. Along with Jeff Bridges, those are the three since 1996.

Could this be a year where a Best Actor winner takes it without a corresponding Best Picture nomination? I mean, I guess so. But at this stage of the game, you’d have to imagine that if they’re good enough to WIN, the movie would have to be good enough as well.

The big news in our world is that Dave Karger, aka The King, is BACK. He’s returned to his old home at Entertainment Weekly and has put out his first list of Oscar predictions for the season.

Let’s see how Best Picture is shaping up over at Erik Anderson’s AwardsWatch:

I don’t think it’s that much of a coincidence we’re not quite getting the same level of strong male performances we’re used to getting, the main reason being in the past two years there has been an effort to push films by and about women. We’re certainly getting a lot of those this year, which explains why the Best Actress race is as strong as it is.

But be that as it may, there are still some rules to be taken. Apparently, there is chatter here and there about Will Smith and whether Academy members can forgive him for that traumatizing event last year (I was there, I know). But the thing is, they aren’t allowing him to attend the ceremony, so his behavior won’t be an issue here. If they’re thinking “we won’t welcome him back,” that’s different from “he gave one of the best performances of the year.” Given the subject matter and his skill as an actor, I’m going to go ahead and say that he will be a very strong performance that they can’t ignore.

So, at least for my part, I am going to predict Will Smith at this time based on those factors and not his rep in town. It’s true that private behavior can sometimes zotz a person from awards, but Mel Gibson got in for Best Director for Hacksaw Ridge because enough people liked the movie. It’s really as simple as that.

Actors aren’t so petty they would not recognize great work. If it isn’t a great work, then they won’t nominate it. This isn’t going to be decided by critics or Film Twitter. Actors will nominate the acting categories. Since actors rule the Academy, actor-led films tend to dominate the Best Picture race.

Austin Butler’s performance of Elvis is one for the ages. Film Twitter doesn’t seem to be too keen on it, but I’m not sure what movie they saw. If there is one thing that we know for sure right now, it’s that no one has given a better performance so far. I haven’t seen Banshees of Inisherin yet, but in general, a transformative work trumps a good performance where no transformation exists. Now, as I said, I haven’t seen it yet, so I don’t know how far Colin Farrell goes — but in general, if you’re up against transformative performances like Austin Butler in Elvis or Brendan Fraser in The Whale, you’re going to have a harder time overcoming that. Maybe.

Put it this way: if you want to completely kill the Oscars in the ratings, leave off Austin Butler, one of the few star-making turns this year that spread to popular culture and would have people actually tuning in to watch the Oscars. Butler is incredibly popular, especially with the Zoomers. How stupid would they have to be to leave off both Austin Butler and Top Gun: Maverick?

This is what I’m thinking for Best Picture right now, with a grain of salt. It will change. Don’t hold me to it.

The Fabelmans
The Banshees of Inisherin
Everything Everywhere All At Once
Babylon
Women Talking
Avatar: The Way of Water
She Said
TÁR
Elvis
Glass Onion

And for Best Actor, I’d go: 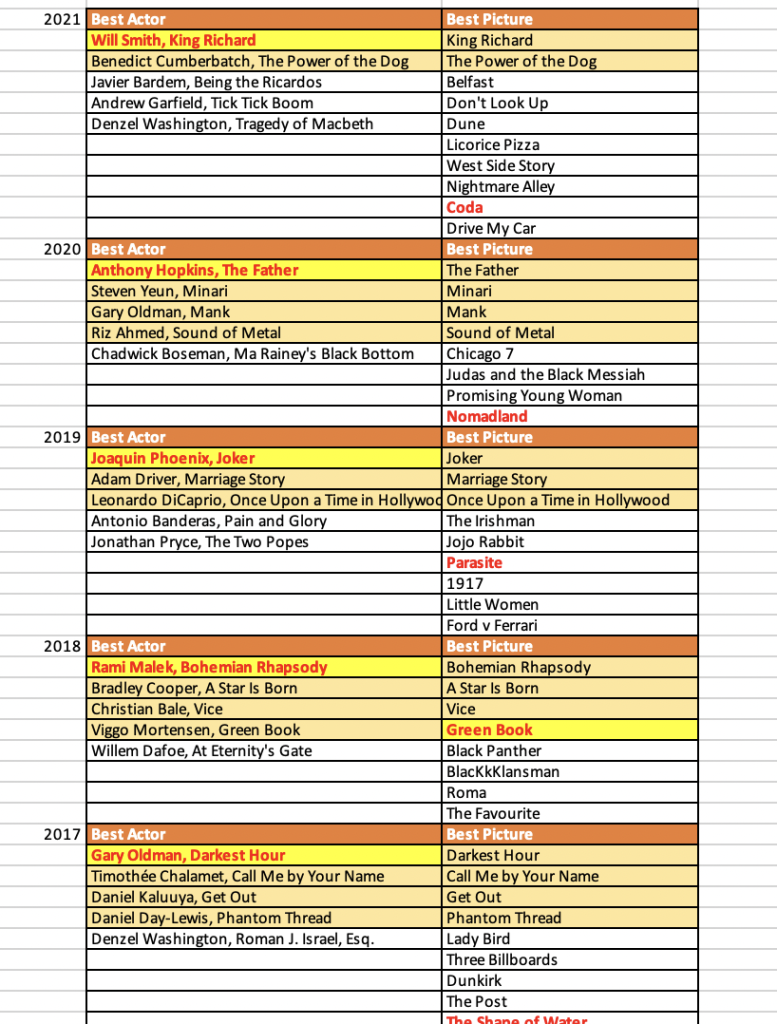 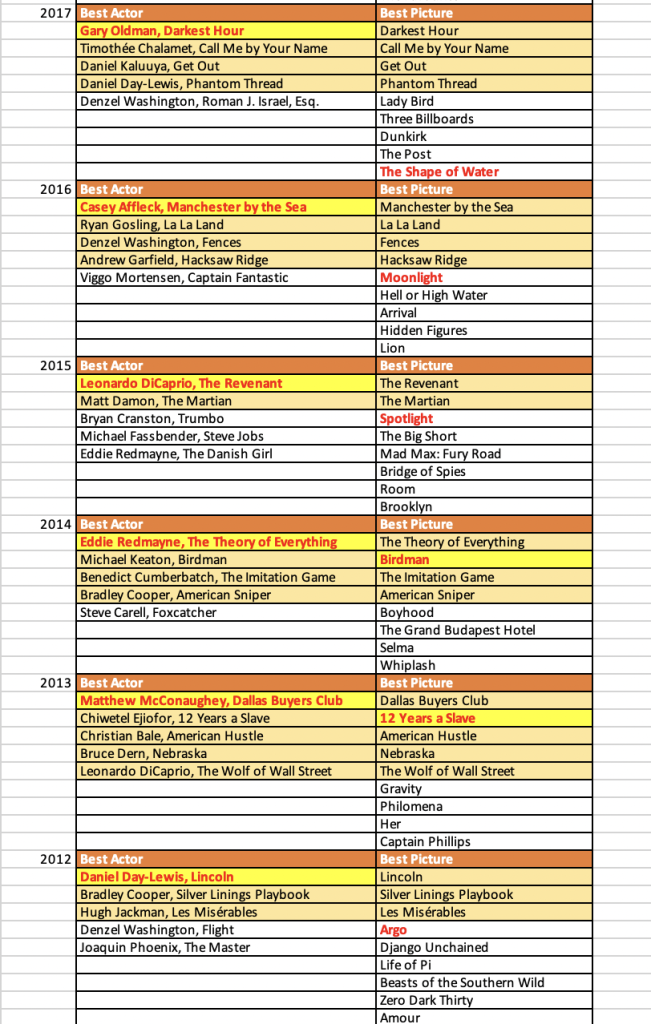 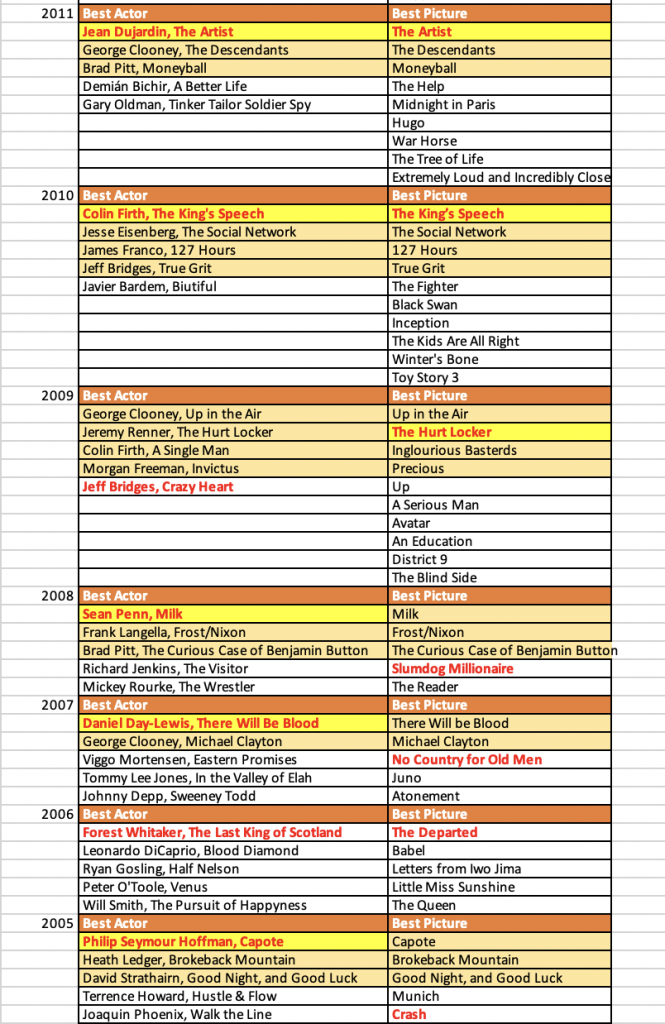 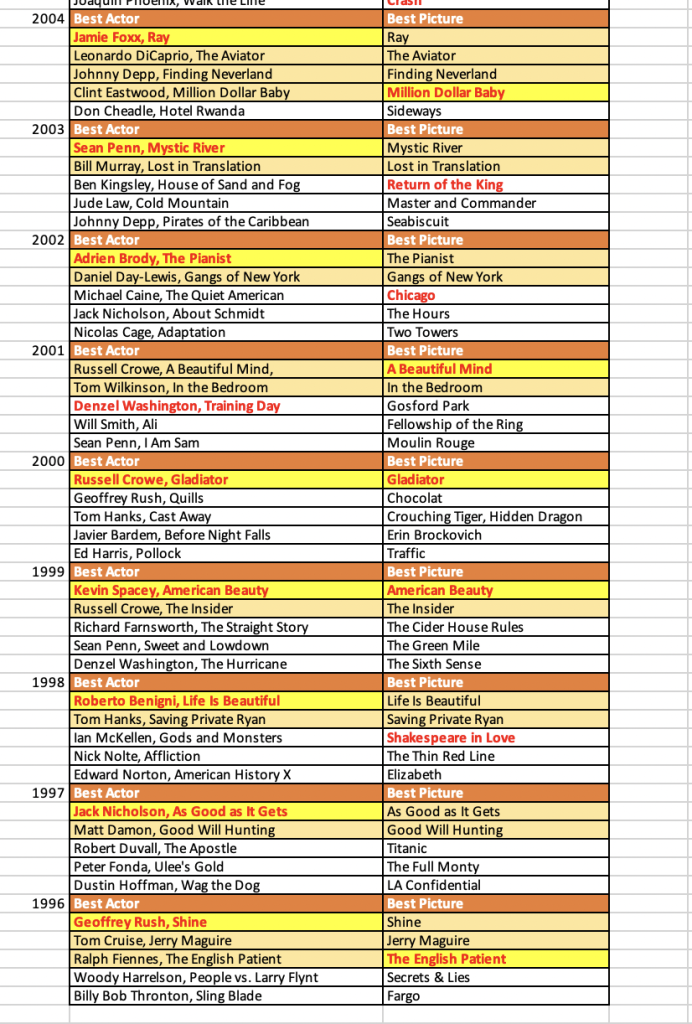