It’s hard not to notice the juxtaposition of another Oscar race unfolding and high-profile trials of Oscar winners in the wake of the Me Too movement. We’ve never lived through anything like this. The closest thing we have to this moment was the Red Scare, during the last “Fourth Turning” (from the 1940s through the 1950s).

We live with it as though it’s all normal. But there’s nothing normal about any of it. Most of the Me Too cases were tried in the Court of Public opinion. But now, they’re being tried in real courts. Kevin Spacey just won his case, a $40 million lawsuit alleging battery.

Even though Spacey scored a victory against Rapp, he still faces legal challenges. He has been ordered to pay MRC, the producer of “House of Cards,” $31 million in damages after the political thriller had its episode-order cut in the wake of abuse allegations against the star. Spacey also faces charges in the U.K. for sexually assaulting three men when he was living in London as the artistic director of the Old Vic theater. He has pled not guilty.

Next up is the Paul Haggis lawsuit.  Like Spacey, Haggis a two-time Oscar winner. He denies the rape charge, is fighting it, and believes it was a retaliatory act for his leaving and speaking out against Scientology.

And finally, the case that launched the moral panic, Harvey Weinstein is about to face a jury trial, the first of what will be many. The Weinstein saga is notorious and lengthy, and just so happens to be the subject of a new movie that’s about to hit Hollywood, She Said. Weinstein and his brother Bob essentially made the Oscars what they are today and launched many a Best Picture contender into the race. Even when they changed the name of their production company from Miramax to Weinstein, they still did well at the Oscars.

The worm is starting to turn where public opinion is concerned, at least outside of the bubble of social media.  The Johnny Depp case was the first moment that the public as a whole could think critically about accusations made against Depp. That so many sided with him wasn’t so much a blow to Me Too as it was gaining some piece of our collective sanity back.

The public has a way of healing itself. But those of us on the inside, who work in the industry, or write about movies or the Oscars, still seem stuck in a perpetual state of paralysis. Everyone is still so afraid of anyone accusing them of having done something inappropriate at some point. It isn’t so much about whether what someone did was crossing a boundary or violating someone’s personal space. It’s about whether they were offended or not. If they were then they can accuse and everyone must go through the motions of dealing with it.

Either way, there are several films headed into the Oscar race that deal with the subject of sexual assault and the consequences that result from it. Reporters take down Weinstein with the help of his victims in She Said. Mennonite women must decide whether to leave or go after discovering they’ve been raped in Women Talking and Cate Blanchett finds herself embroiled in her own downfall, flipping the script from women as victims to women as perpetrators.

The question is how much these trials will impact our reception of these films, and how generally they might influence this year’s Oscar race. Must one win in a year like this one? Will these films be rewarded in some way because of it? Or will they be avoided because more people are ready to move on.

Variety’s Clayton Davis ruminates on how the Oscar voters might respond to all of this, writing:

Hollywood’s reckoning with its role in the enabling of monsters is knocking on its door. Even as Harvey Weinstein’s hold on Hollywood continues to fade, his victims’ need for reconciliation and accountability is becoming more urgent than ever.

One thing we know for sure, the critics and filmmakers are still very locked into this story in all ways. Dana Stevens has written a lengthy piece about She Said, Women Talking and TAR: 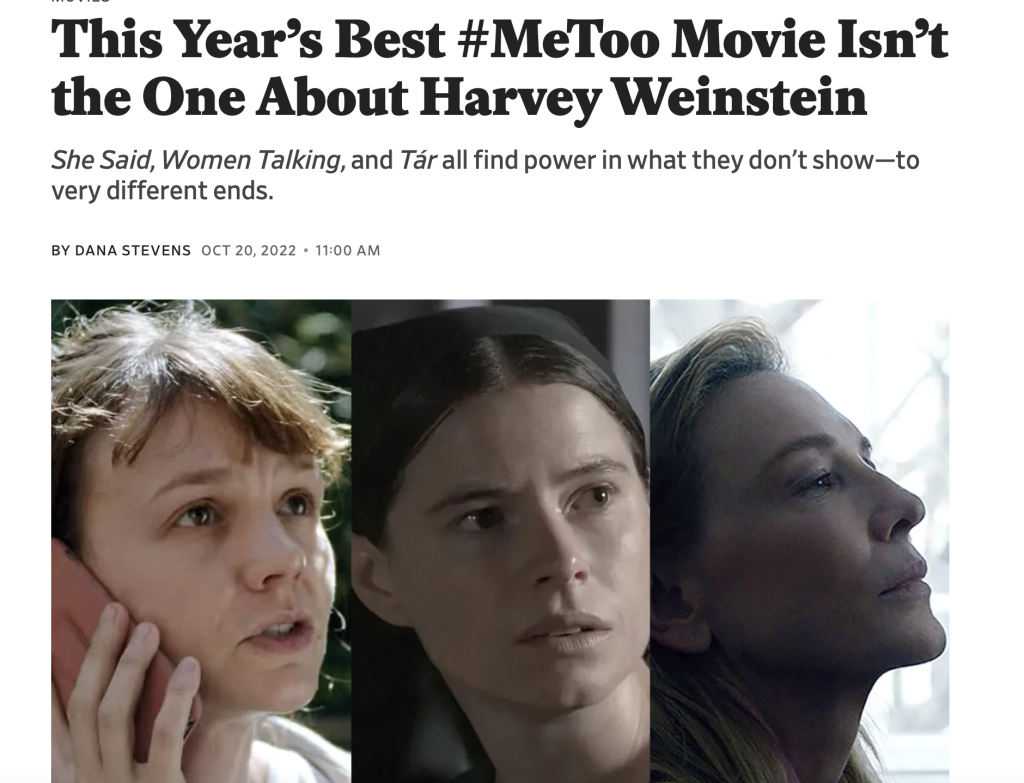 And another piece in Variety: 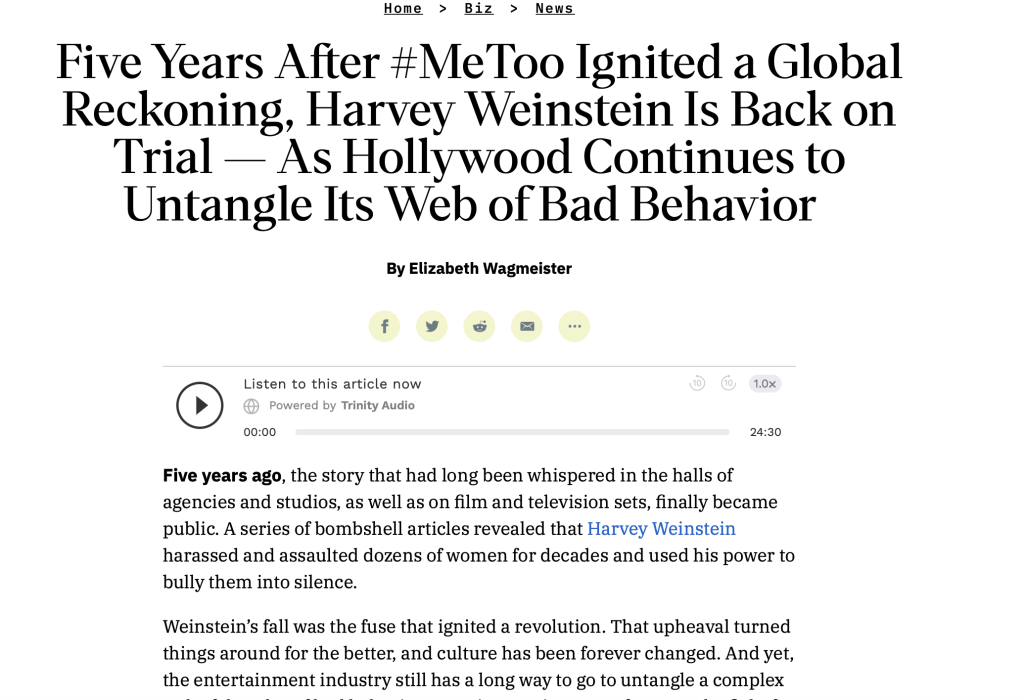 As far as awards shows go, if they’re looking for ratings, I’m not sure using air time to work through something that is very insular to Hollywood. Maybe they don’t see it that way but five years ago this was what awards shows became, like SAG and the Oscars.  Going back to that right now might play on Twitter but not so much anywhere else.

Either way, it certainly has been a time of dramatic change. Best thing to do is strap in and survive the ride.

Film Fest 919 Kicks off with Award-Winning 'Devotion,' 'The Banshees of Inisherin'