How Jimmy Kimmel Can Save the Oscars, Unite the Country and Boost His Own Ratings

Download: How Jimmy Kimmel Can Save the Oscars, Unite the Country and Boost His Own Ratings

Jimmy Kimmel has hosted the Oscars twice already. He tried to spice them up with funny bits, as I recall. Some of them worked, and some didn’t.  He’s back as a more mainstream option for the Academy. On the one hand, having Jimmy Kimmel as the host probably won’t do much for their ratings. They’re getting the same amount of people who watch his show, so roughly 1.5 million.

Kimmel is a highly partisan late-night comedy host who has been sucked into the same climate of fear the rest have, with Bill Maher being the lone exception. They are essentially a little bit funnier than watching MSNBC.

If you notice, the cable news ratings on CNN and MSNBC, like the ratings for late-night comedy and the Oscars, have been plummeting. But you know what is not plummeting? Fox News, and Greg Gutfield who is on Fox News as their late-night comedy host. Here are the most recent ratings:

Gutfeld is almost double what Kimmel is. Tucker Carlson and The Five routinely win the target demo of viewers even. Their advertising, though, shows the divide in this country. Corporations like Big Tech and Big Media, are mostly aligned with the Left. So advertising on those shows would hurt their reputation so they don’t advertise, even though there are more eyeballs. They aren’t the right kind of eyeballs. 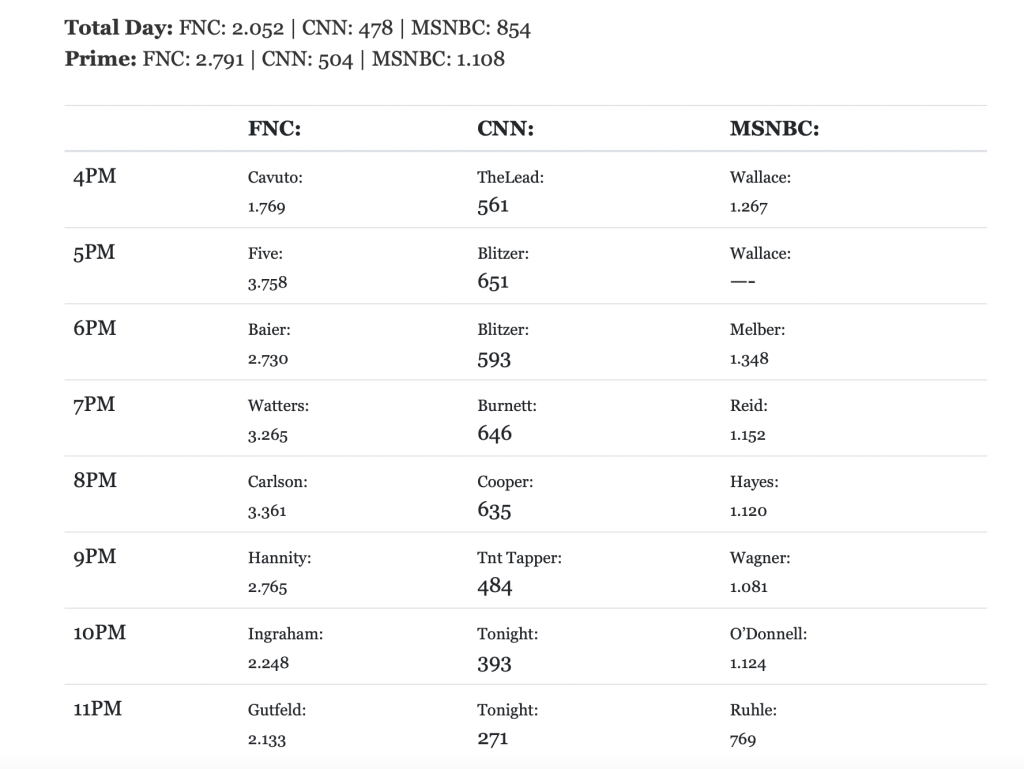 The Oscars don’t yet want to step out of the insulated, isolated enclave the film industry has become over the past few years. They’re picking a middle ground with Kimmel. Right away, I thought, oh no. Kimmel can’t even boost ratings on his own site. They needed someone people who aren’t sucked into the bunker of the Left will want to watch. A Ricky Gervais or a Chris Rock. But I think just pushing back against virtue signaling with their hosts might help – and by that, I mean, when they try to be representative, it comes off as performative.

So that seems like a step in the right direction. I do think that Jimmy Kimmel can send a signal to the rest of the country that he is willing to poke fun at the Puritanical, sanctimonious, uptight Left. If he can do that, and if those jokes go viral, it will go a long way to start building a more united country around entertainment, which is ideal.

The first thing Jimmy Kimmel should do is actively try to make Twitter mad. This isn’t necessarily to insult marginalized groups, but to insult those whose entire lives are about fighting on behalf of those groups. Those are always going to be safe targets. That is why Andrew Doyle’s Tatania McGrath is so funny. He is making fun of the kind of person who takes social justice to an extreme: 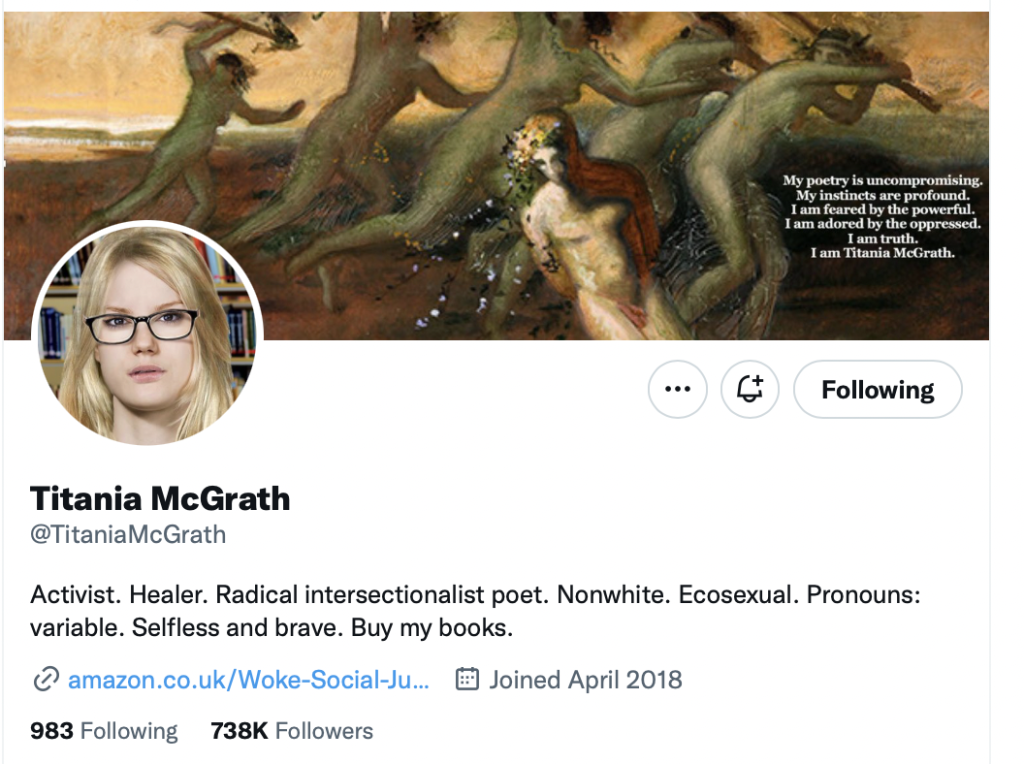 The hive mind online works by threatening corporations to pull advertising for anyone they believe is non-compliant (Joe Rogan, Dave Chappelle, Elon Musk). Activists also work at plenty of movie studios now and in publicity.  That does mean walking a line if you’re the Academy.  But this kind of extreme policing of thought is mainly an online thing. Out there in the world, people still need to laugh. Here is another example of something that is funny but also verboten and would make Twitter very angry:

But just try to watch it without laughing. Of course, I’m not suggesting the Academy or Kimmel go in for that level of funny, but I am saying that if Kimmel shows himself to be a Bill Maher-like figure, someone willing to go all the way to the funny — he will do well.

And remember, every time Bill Maher does a show, he trends on Twitter, usually for saying something that made Twitter mad. Every so often, it’s because they love what he said.   Kimmel can find a middle ground between being the warm, welcoming host and signaling to the people out there in the world that watching the Oscars is safe because it isn’t going to spiral into the kind of crap that makes people not want to watch Kimmel in the first place.

So let me spell it out. The Left of this country has all of the cultural, political and much of the monetary power. People like Jimmy Kimmel, Howard Stern, Jon Stewart all sit atop the the rest of the peasants in America. So if their main target are those same peasants? It isn’t funny to watch them, the rich aholes, make fun of people with nothing. If they love Donald Trump so what. They’re still human beings and potentially Oscar viewers. The Academy and ABC do not have the luxury to “let them eat cake.”

But even more than boosting ratings, to be funny now requires saying things and making jokes about things no one is allowed to talk about. I think if Kimmel takes some chances, he could do better with the show. Bring in people like Adam Carolla to help write some of those jokes. If it’s just like spending a night watching the Rachel Maddow show it’s not going to be fun or funny and it will be alienating to potential audiences.

The Academy has an opportunity to win back fans because of the slap last year. That was the most noticed, talked about thing that has ever happened at the Oscars. Viewers will be tuning it right at the beginning to see what they say about it. Kimmel has a chance to then prove to those viewers that the Academy isn’t as “woke” and virtue signaling as it’s been in the past five or so years.

Like Kimmel’s show, the Oscar audience took a hit when Trump won. Believe it or not, many Trump supporters used to watch the Oscars, and Hollywood movies and late night comedy. Because of hatred for Trump, these shows all became partisan mouthpieces for the Democrats. All of their jokes went in one direction. They sneered at half the country in a mean way. Why would they watch?

Now I understand that most people reading this are probably people who sneer at them too. At best they sneer at them. At worst they see them as fascistwhitesupremacistinsurrectionistsdomesticterrorists. Making jokes about them lands with a smaller group now than those who poke fun at the Left. Just saying.

These older comedians want their lives to matter. They have all the money they could ever want. They’re looking back at their careers and thinking, what if that is all there is? That is why they have tried to become “important” now. But the struggle of daily life – that is what fuels the best movies, the best art, the best jokes. If you’re cut off from that struggle and you only exist inside of a Royal Court of sorts, then nothing you say is going to matter more broadly anyway.

Every day, each side of the political aisle is shown the absolute worst of the other side. This has been good for outlets that count on outrage to drive engagement and views, but it’s been terrible for everyone else.

My advice: lay off the politics as much as possible. No one needs to hear yet more activism on a night like that. We hear it enough. It’s everything, everywhere all at once. So how about bringing people together, making the country feel united, and remembering we’re all part of the same species. We can do this.

I wish them the best and hope it isn’t a total disaster.  Maybe this is a good chance to move things in a more positive direction.

Reframe: 'Nashville' Remains the Damnedest Thing I Ever Saw